Nature and living creatures in particular are very important when it comes to NION’s vision. In addition to direct interaction with all kinds of animals, education and art also offer the opportunity to engage. For example at the current exhibition at Tieranatomisches Theater Berlin.

Last year, I rediscovered my soft spot for old scientific illustrations of plants and animals. A good place to indulge in a little escapism is the Biodiversity Library. Clicking through yellowed pictures of insects and other creatures has a surprisingly calming effect on me. Perhaps because it reminds me of my childhood when I spent hours looking at the charts inside a thick encyclopedia, forgetting the world around me.

Zoological illustrations do not only exist in books, though. Long before digitalization, elaborately illustrated wall charts demonstrated the outer form and anatomy of the animal world in the auditoria of universities, and it amazes me that they are still used today. Dr. Gerhard Scholtz, Professor of Comparative Zoology at the Institute of Biology at Berlin’s Humboldt University, appreciates them for pragmatic reasons: in contrast to digital projections, he can show series of several parts next to each other, and does not have to darken the auditorium either, which enables him to present three-dimensional objects at the same time.

However, the wall charts of the Zoological Teaching Collection are not accessible to the general public. Therefore, Prof. Dr. Scholtz has searched thousands of wall charts and curated an exhibition that is currently shown at the Veterinary Anatomy Theatre in Berlin. It illuminates not only scientific perspectives on animal carcasses, but also the artistic techniques used to illustrate them, such as lithography, ink or pen drawings.

Exactly for this reason – and because of the peace I feel when looking at such illustrations – I went to see the exhibition “Zoologie in Bildern” at Tieranatomisches Theater last Saturday, right after the opening night.

A white and bright interior

Already the building itself, hidden on Campus Nord of Humboldt University, is impressive. Carl Gotthard Langhans, who also designed the Brandenburg Gate, erected it in 1789/90 on behalf of King Friedrich Wilhelm II. It is Berlin’s oldest preserved academic teaching building and you can still see the loans to ancient architecture and to Palladio’s villas of the northern Italian Renaissance. Since 2012, it is used for exhibitions by Hermann von Helmholtz-Zentrum für Kulturtechnik. 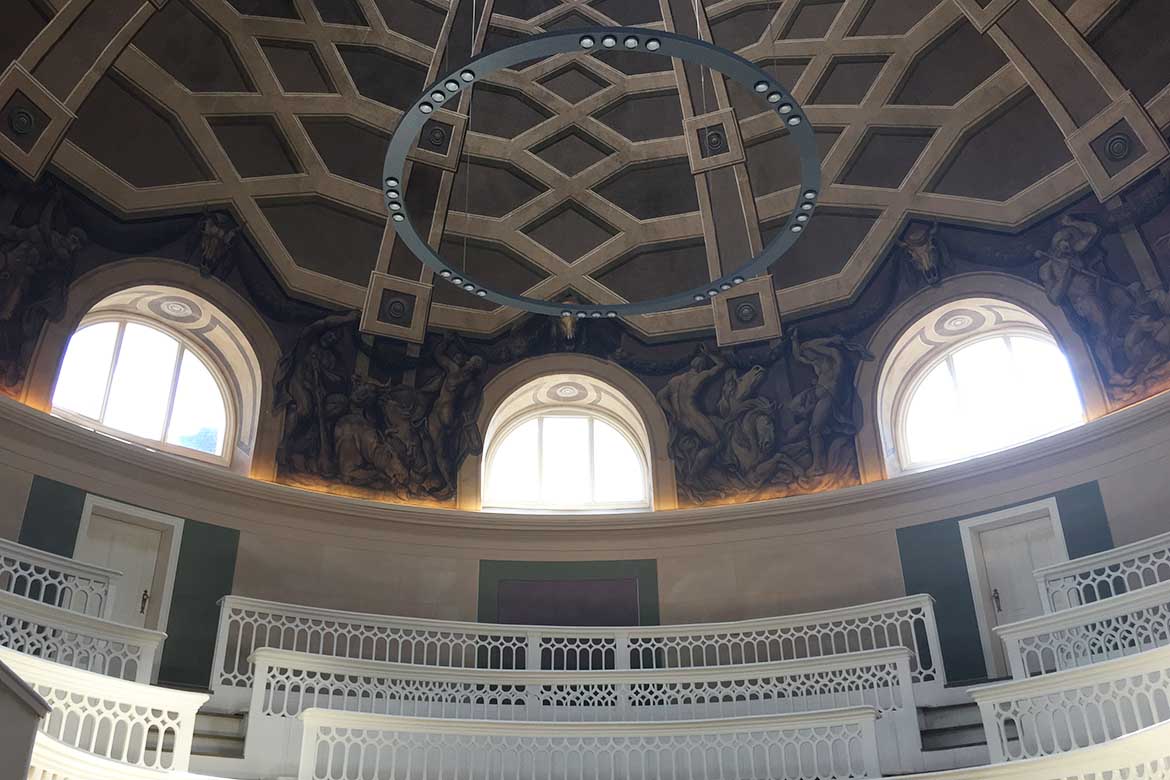 Inside, almost everything is white, and bright stairs wind up to the first floor, where there is a small, but beautiful auditorium. I am particularly fascinated by the magnificent dome, arched windows, the white benches and railings. The auditorium is the heart around which the exhibition rooms are located and you can walk through them endlessly in a circle. Not all windows are darkened to keep the sun out, so some of the rooms are flooded with light and I feel the urgent need to move in here. One room is full of labeled cupboards, and I would love to open them all, getting things out and losing myself in the hidden exhibits. But I am also very happy when I look at the works on display.

There are the classics, which were produced as lithographs in large series and distributed world-wide. Created by the Leipzig zoologist Rudolf Leuckart (1822 – 1898) and his colleagues, as well as by Paul Pfurtscheller (1855-1927), a high school teacher from Vienna. The special feature of these panels is the combination of near-natural illustrations with schematic representations. 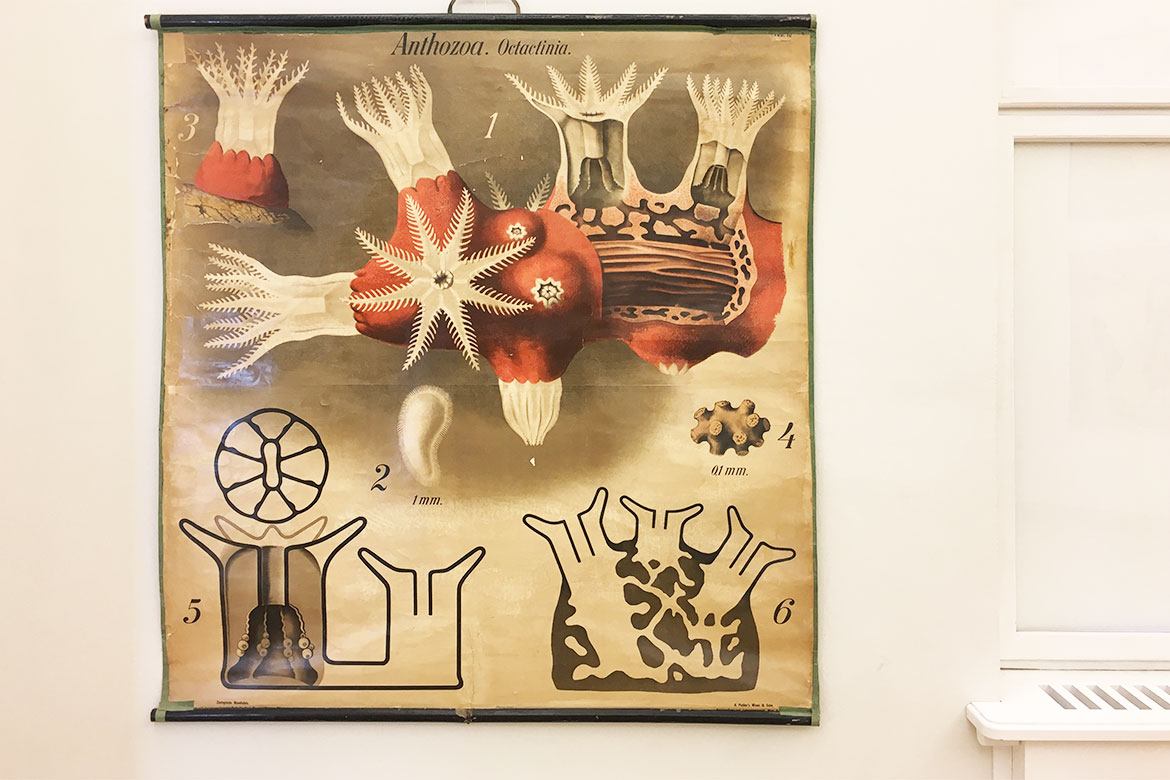 I am especially taken with the picture of a noble coral – a lithograph by Pfurtscheller from 1903, which could also be a fictitious creature, perhaps originating from a horror-scenario, or maybe a bacterium which came to light under a microscope. 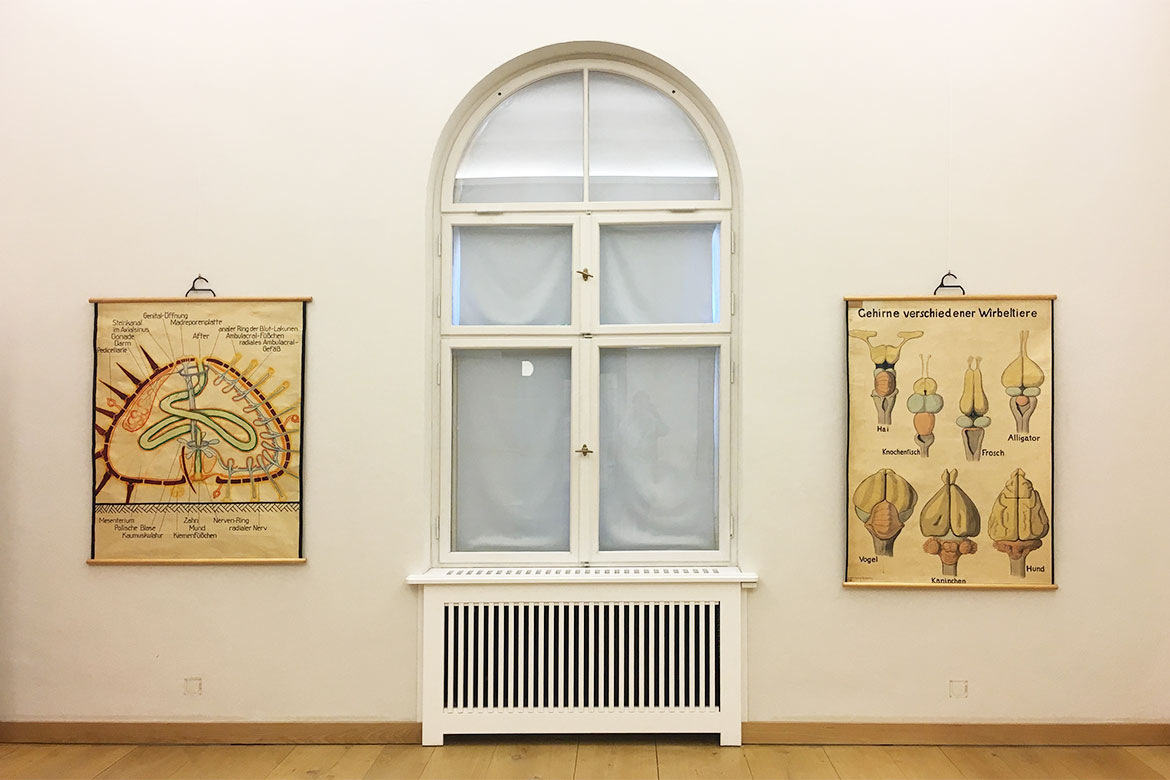 Many charts are based on already published illustrations, which are modified and newly combined. Therefore, original charts based on research results and didactic findings are of particular interest for the curator of the exhibition. I am not so much attracted to these often very reduced images, though. Perhaps they are too scientific, too little playful for me.

But I feel quite differently in the room dedicated to comparisons. The depiction of zoological objects is obviously strongly influenced by artistic implementation. 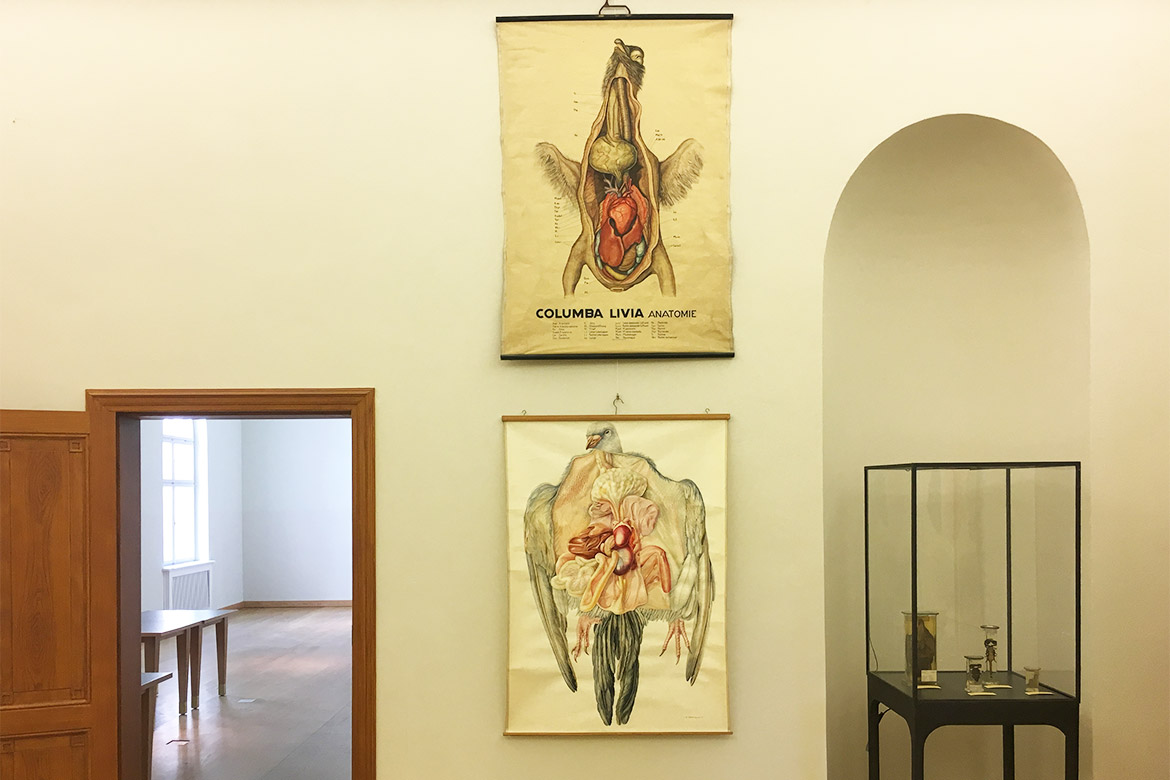 Especially two panels of dead birds fascinate me and I look at them for a very long time. Both show the same pigeon species and even the idea of representation is alike. Yet they are very different. The painting by Carla Stephanie Friedmann from 1971 seems opulent and playful, whereas the work of an unknown artist from 1957 appears to be more objective. No wonder, since it is based on a line drawing already published in a book from 1898. But why did the artist ruin the wings like that?

However, both panels remind me of the devastating photos of dead birds with with plastic waste in their stomachs. As the idea of the comparison section is to focus not only on technical questions such as the choice of materials and colours, but also on the personalities of the artists and their style, who are influenced by their environment, it is maybe time to add a third perspective. 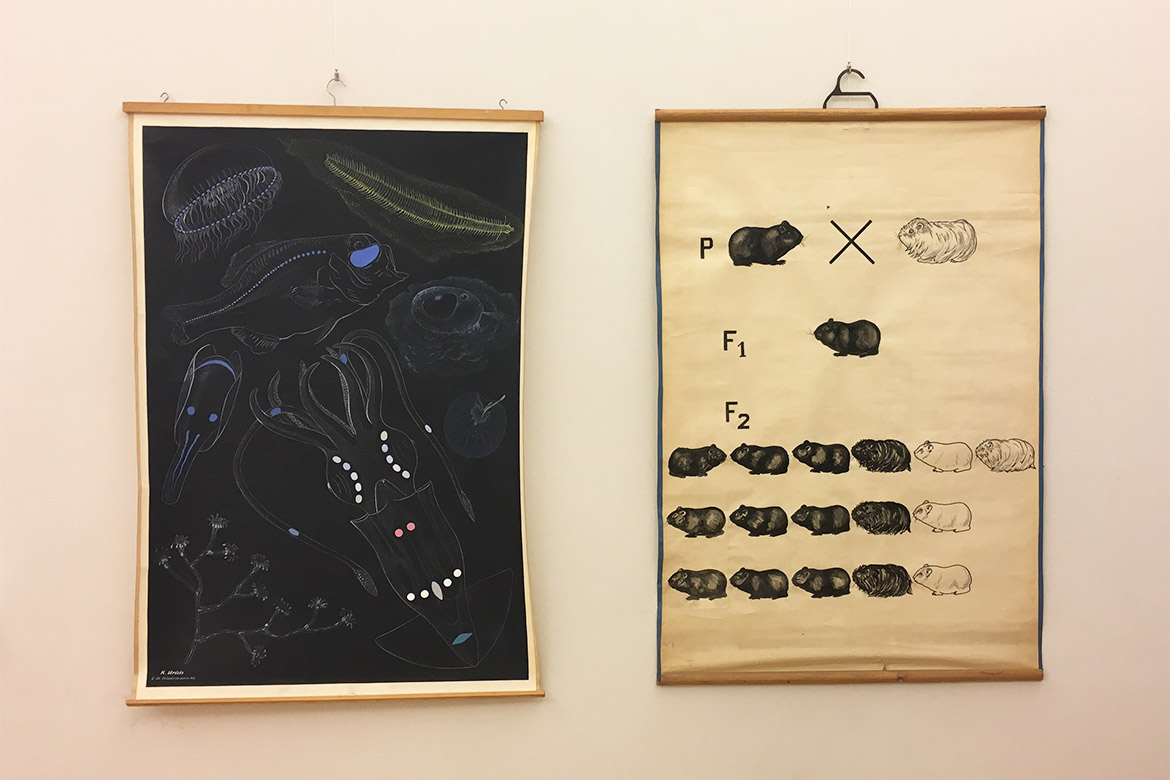 My favourite pieces of the exhibition hang right next to each other. While the earlier wall charts still combined exterior view, anatomy, development and schematic representations, in the course of time a specialization and extension of the themes occurred. This leads to charts such as those about the genetics of guinea pigs or deep-sea fish that glow in the dark. So when I am leaving the exhibition, I am really missing the usual “exit through the gift shop” procedure to get my own piece of zoological art.

Maybe the sale here wouldn’t make a lot of money anyway. I was almost alone the whole time, admiring the pieces in unusual solitude – another good reason to visit the exhibition again. Oh, and it is free! 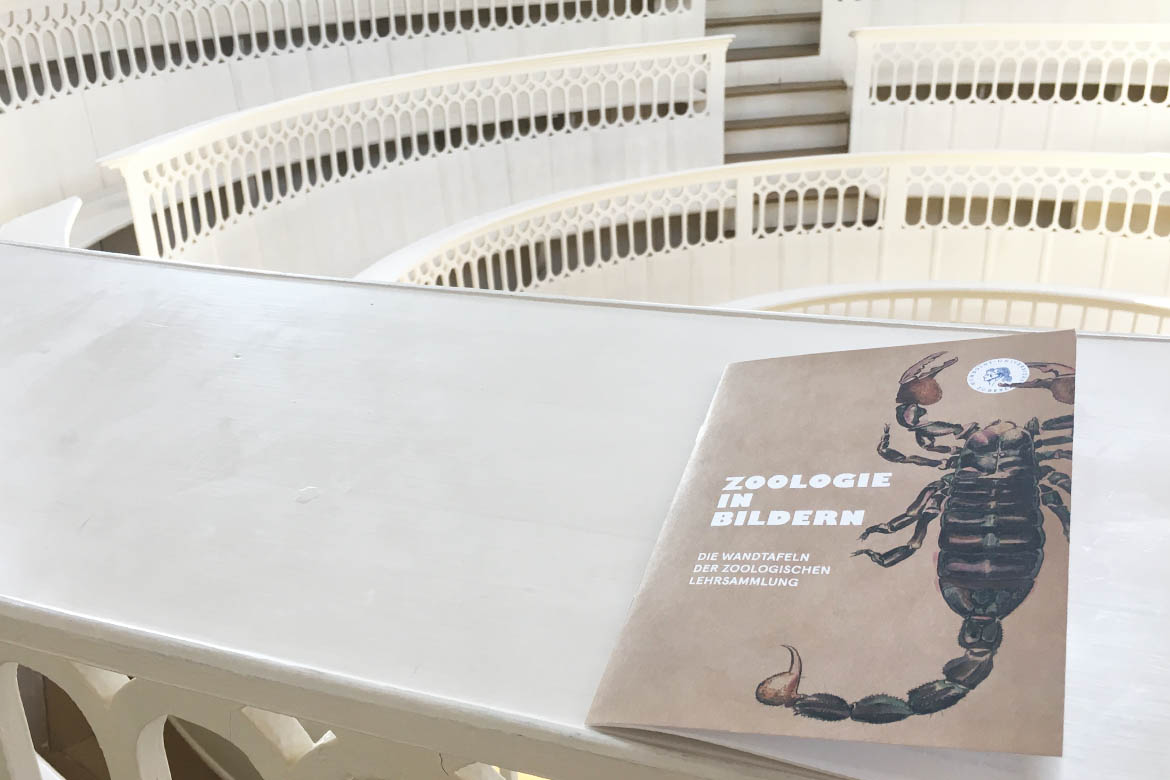