NION community have created their first Summer Solstice festivity. We appreciated the Sun, met some wonderful creatures, and held a very special ritual in the woods.

A few weeks ago, at a NION community workshop, we had decided to pay special tribute to this year’s Summer Solstice. At that time it was all about raising our awareness of Nature, which is especially difficult when you live in a big city like Berlin. It was only then that I realized how natural it was for me as a child and teenager to be in the forest, see flower meadows, fields and animals, and enjoy the silence of Nature. Nowadays, I long for quiet zones in parks. Quite stuffy – but actually an act of despair. You are rarely alone even outside Berlin and have your peace.

During the workshop, the idea came up to welcome the Sun in the morning on the day of the Summer Solstice and to wave it goodbye in the evening with a ritual. At the following community meetings, we teamed up with La Foresta Collective, gathered ideas and made plans for the longest day of the year.

Actually, bad weather was predicted for the early morning of June 21. But the rain had already poured over the city before two o’clock, so we met around half past four at the exit of S-Bahn station Treptower Park, from where we drove our bicycles along the Spree towards Insel der Jugend. It was so peaceful, only once we overtook two obviously drunk men, who talked loudly and had a shopping cart with empties. We listened to the many birds and marvelled at the haze that gently floated over the Spree. A pleasant freshness rose from the still damp meadows.

We stopped near Insel der Jugend and sat down to meditate close to the shore. Unfortunately, my mind always wandered, I opened my eyes again and again. But looking at the landscape and the river gave me a lot of peace. I observed ducks, which flew over the water. Their flapping wings designed patterns in the otherwise calm surface. A bit of sunlight was already visible behind the trees on the opposite shore. It was so good to inhale the cool air while listening to the birds surrounding us like a huge orchestra. From time to time a fish popped up, leaving concentric circles, slowly moving and then fading away. 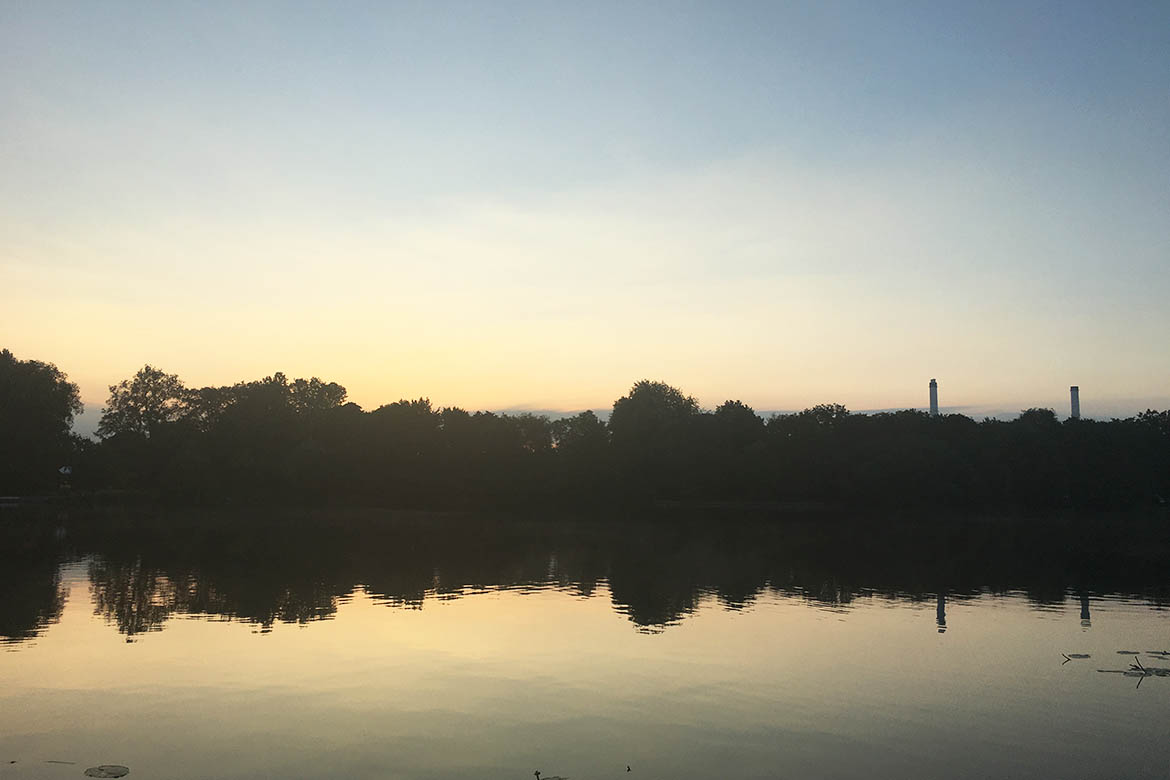 Although the haze over the water had almost disappeared, it increased again. The Sun was still hidden behind the trees, but its warmth was apparently enough to create a wafting mist that moved steadily towards the light. I admired the great spectacle that resembled a movie scene and yet was real.

After a while a fisherman joined us. Probably this was his regular place – that would explain why he sat down so close to us and greeted us with a noisy “Good Morning!” From that moment on, once in a while, his fishing line buzzed through the air, he threw stones into the water or pulled a zipper. I was sad that the illusion of solitude was over, but I took it as a reason to become a bit more active and eat and share some fresh berries. Meanwhile, we could hardly look straight ahead without being blinded.

The Sun had risen above the trees, the haze had disappeared, our cooled bodies enjoyed the warmth. It was impossible for me not to smile. After an hour and a half we packed our bags and made our way back. Hello, beautiful day! 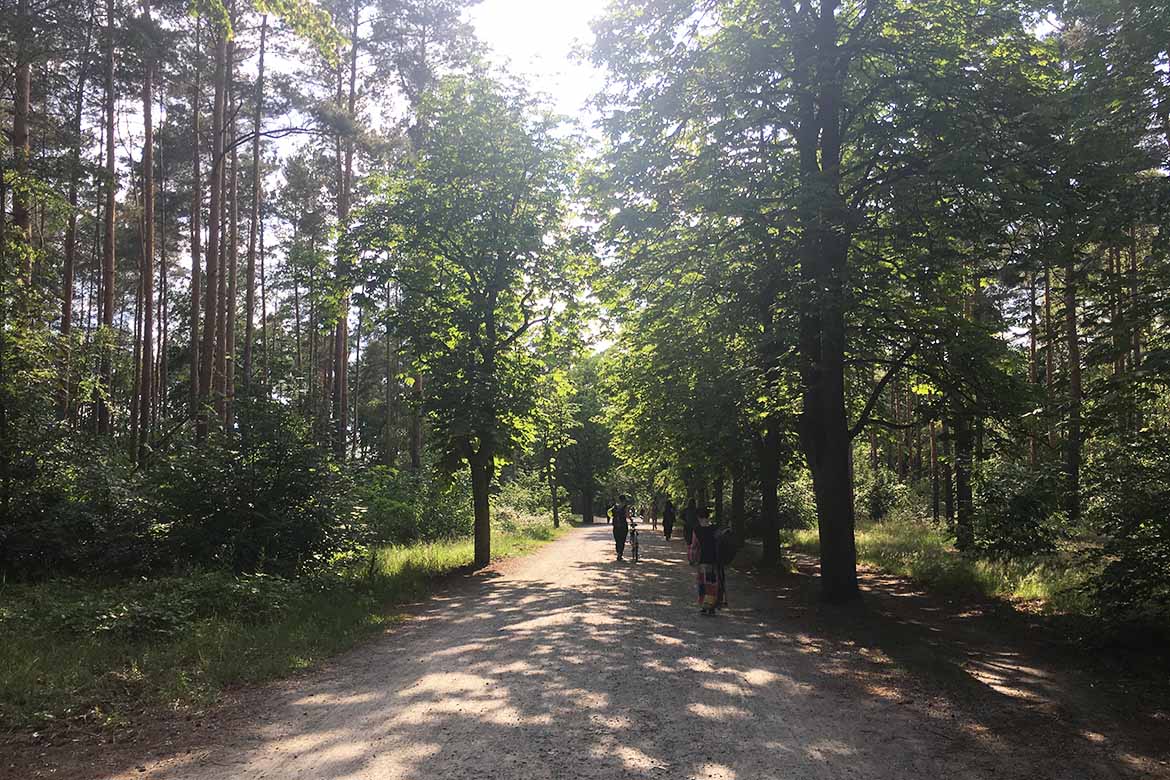 Around 5 pm, NION Community and La Foresta Collective met at the entrance of Grunewald. For our ritual we had chosen a place in the forest, a little off the beaten track. The stroll to get there was supposed to be a so-called Silent Walk: together, but in silence, we would pay attention to Nature. We wanted to listen to the sounds of the animals, the rustling of the leaves in the wind, the smell of earth, grass and trees, and use as many of our senses as possible at the same time. We also wanted to find creatures – whether real or virtual, human, animal or fantasy – which we wanted to invite to our ritual.

I started last, spread my arms a little, let the wind touch my skin, breathed in the forest air and was very, very happy despite a complicated private situation. Actually, I was so happy that I couldn’t stop smiling and crying with joy. I knew this state from my Vipassana meditation retreat that I had attended in May. There, it had been quite easy to feel that way. Back in Berlin, and especially at the moment, this state had seemed to become unreachable. 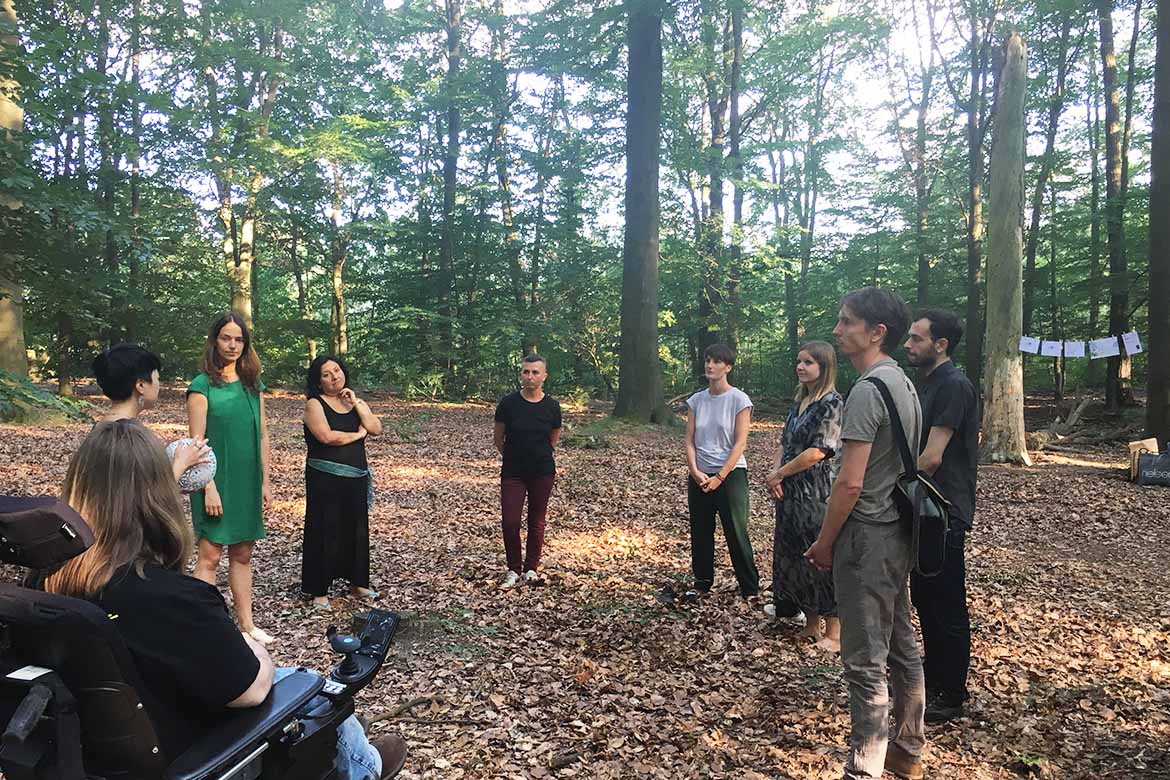 At our chosen spot in the forest it was pleasantly chill and we formed a circle. When I took off the shoes, my feet sunk in and were covered by leaves immediately. First we introduced each other to the creatures that had joined us on the way. Among them were a leopard, a whale, a ghost responsible for the wonderful smells in the forest, an elephant and many small birds. I had actually been sure that I would bring an already familiar animal, a kind of magic deer, but right after entering the forest a small brown-grey (virtual) bird had sat on my shoulder. It felt like an old confidante, a friend I’ve had since childhood.

Breathing and movement exercises followed, which helped us to connect with Nature and to develop a feeling for the course of the seasons. Later, we even merged with our creature friends and imitated their sounds. One can either embarrassingly distance oneself from such actions or simply get involved and see what happens. My openness was rewarded with a lot of joy, goosebumps, carelessness and a strong sense of connection with Nature and the lovely people I was with.

Afterwards we shared our most wonderful experiences with the Sun: What does it mean to us? When do we enjoy the Sun most? How does life affect those in the group who come from countries where it gets dark early even in Summer? How does the lack of Sun affects their lives during Berlin’s harsh winter? 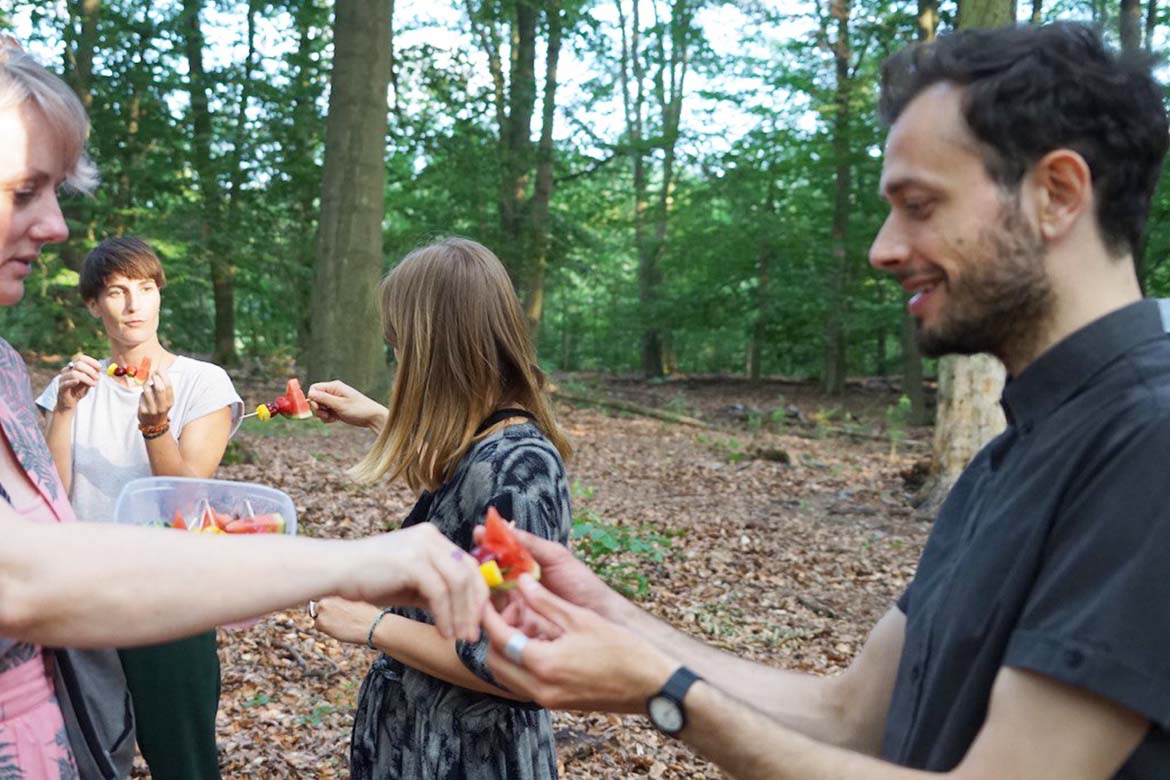 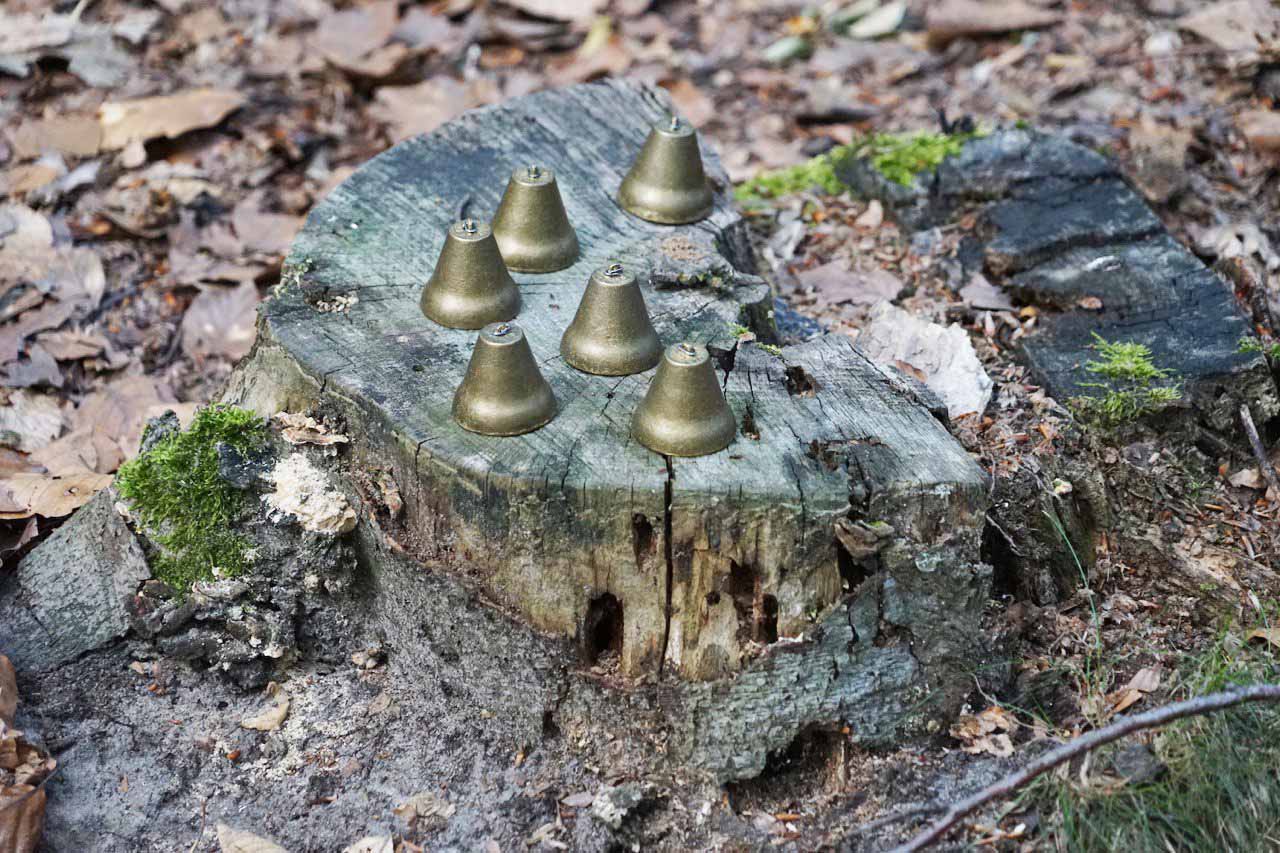 To finish, we wanted to pay tribute to the four elements, Fire, Earth, Water and Air. I had prepared skewers with vegetables and fruit, and a NION community member, Maria, had brought little Russian bells from her grandfather, which we rang while we ate. It came as a surprise that the chili pepper pieces, red on the vegetables skewers and yellow on the fruit skewers, were very, very spicy. Apparently it hadn’t been enough to try the tips of the pods at home, which seemed to be very mild. So unintentionally, I had invited some dragons as well.

Before we made our way to a huge dune, there was a small exhibition by artist Sandra Javera, who also designed this year’s La Foresta summer logo. We admired filigree illustrations that showed different views of the same apartment during the change of seasons, draped on a string between two trees. This made it easy to take the exhibition with us and put it up again near the dune, where we spread our blankets and shared food or drinks while waiting for the sunset. 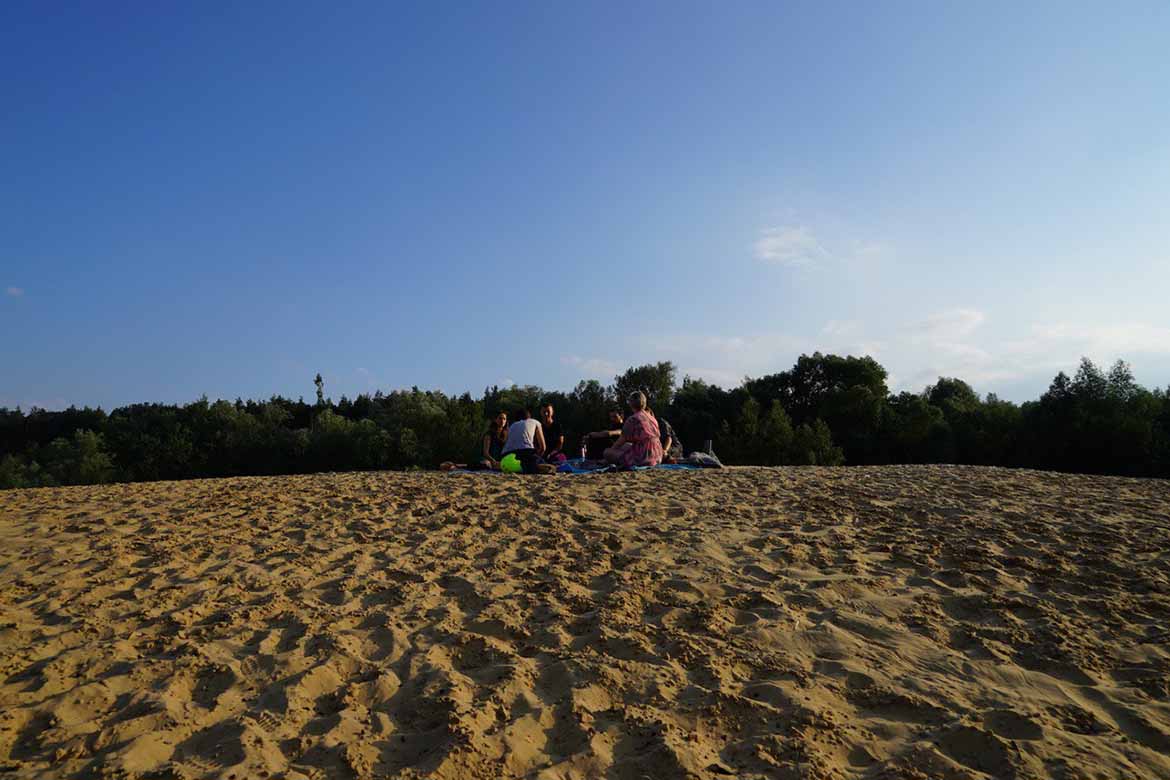 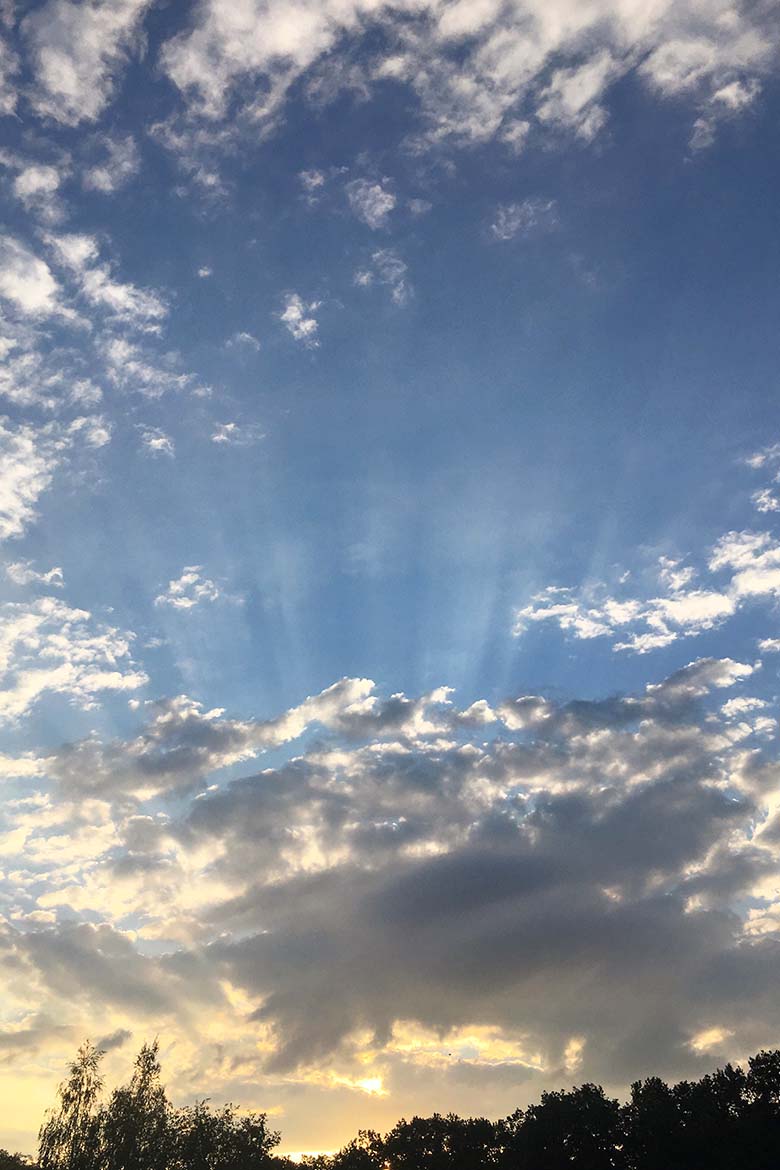 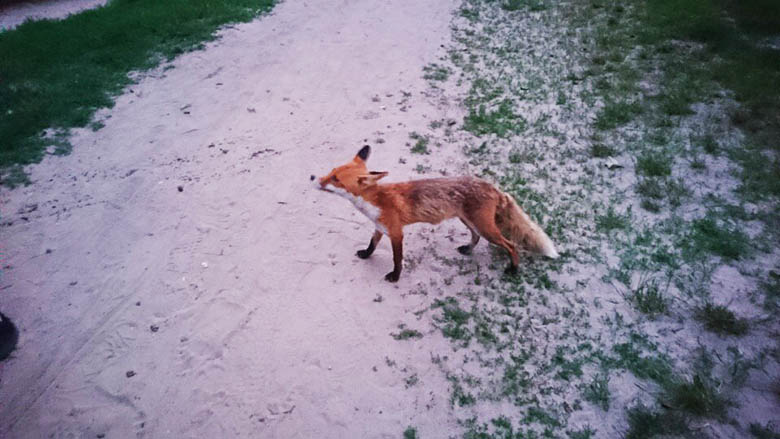 The atmosphere was beautiful, uncomplicated and so uplifting. Although we had thought about an approximate sequence of events, it was not until the evening itself that everything came together, each of us contributed their part and thus created something completely new: our first Summer Solstice celebration, our first common ritual! While some stayed until the Sun had completely set and even met a fox at the nearby lake, I happily went home with the little grey-brown bird still sitting on my shoulder.

Join us on Saturday, July 20 at 4:45 am to absorb the power of the Sun! We wake up super duper early enough to catch the Sunrise and indulge ourselves one hour into silence and stillness