Whether you want to view cherry blossoms or maple leaves in style or just escape from everything for an hour, take a break in one of Vienna‘s most beautiful gardens – Setagaya Park. It has got turtles!

It is raining hard and I wish I had gotten out of the house sooner. That way, I would be sitting in one of my favorite places already, looking out at the lush greenery, imagining myself in a hidden corner of Setagaya. But it is a corner of Vienna where I would be hiding, one that has increased in popularity in recent years, but has retained much of its charm. It is a garden designed by Ken Nakajima, finished in 1992 to commemorate the relationship between two districts: Setagaya, Tokyo, and Döbling, Vienna.

Hidden on a hillside

Situated on a slope, high up in the hills that surround Vienna, the Setagaya Park lies in one of Vienna‘s richest districts, surrounded by villas and embassies. A bamboo fence lines its length and it has only one obvious entrance. In fact, there are two and I suspect a third, illegal one at the back, if the well-beaten path that is visible there is any indication. It is open from the beginning of April to the end of October and if you take the second entrance through the retirement home, it is accessible by wheelchair. Dogs are banned and it isn‘t a park for wild games or sports. It opens early at 7 a.m. and closing times are variable, depending on the month. The longer it stays light outside, the later it closes. Take the 37 tram or the 10A bus to Barawitzkagasse and there you are. 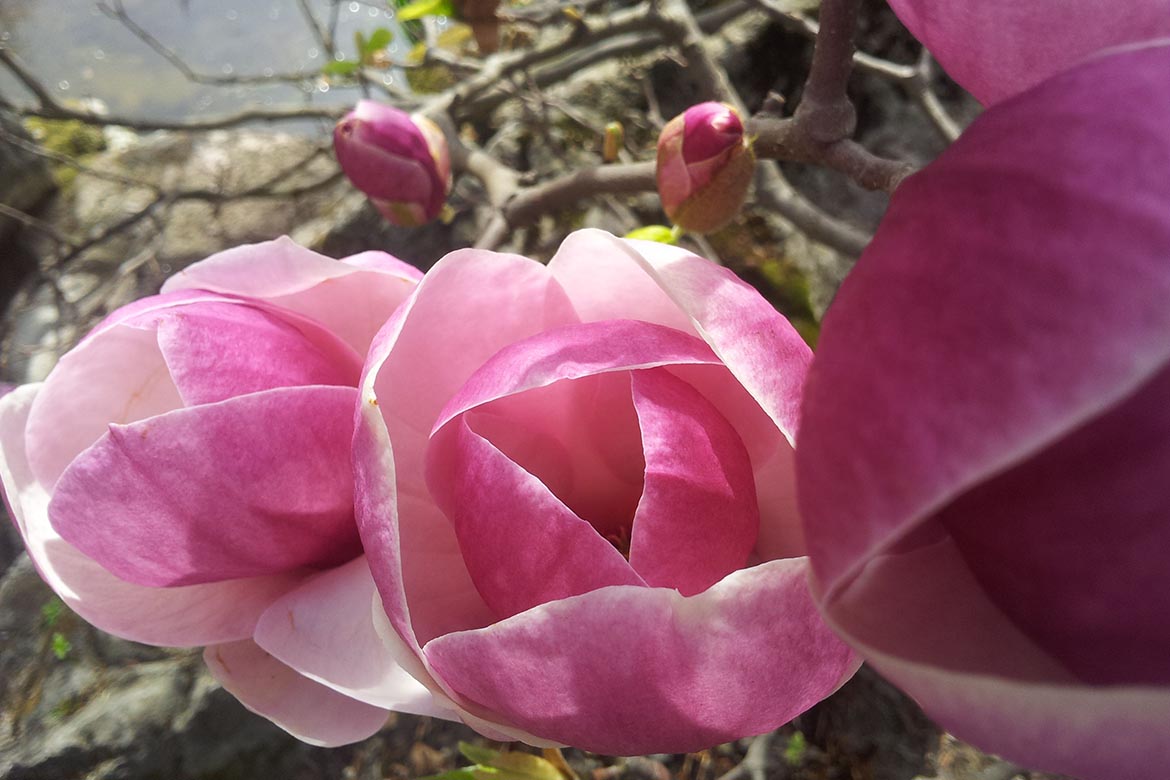 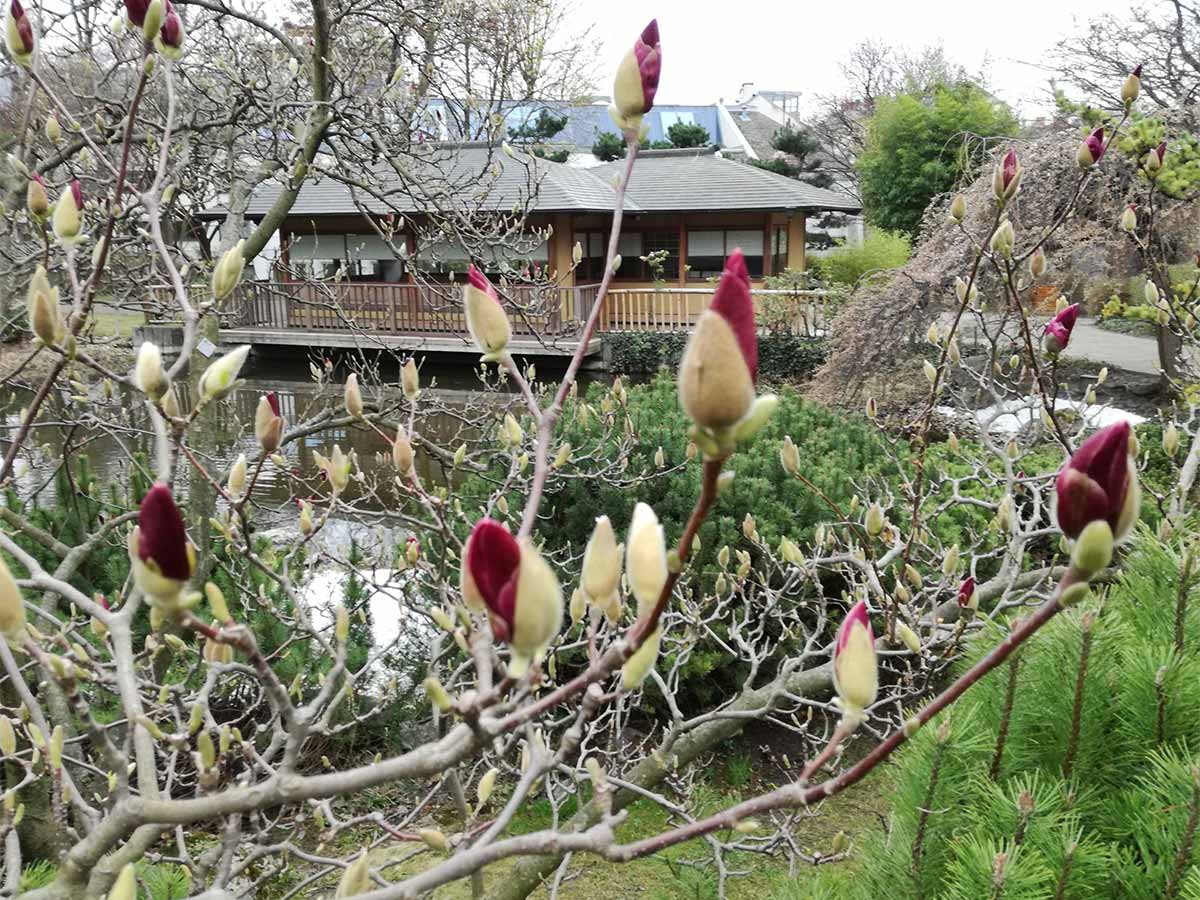 After you walk up a few steps and enter through a gate reminiscent of those in Kyoto‘s Shugakuin Imperial Villa, you come upon a tea house. To your left, a path leads up the hill. To your right, a path leads behind the tea house and if you head straight, you will come to the balustrade overlooking the pond. Sadly, the tea house is deserted, as if nobody has found a good use for it yet. But it is nice to look inside through the windows and imagine drinking matcha and having wagashi. Go hang over the balustrade and stare into the water. If you wait for a while, turtles, fish and ducks will approach you, looking for treats. Do not feed them, though, please.

Once you have seen enough of water creatures and water lilies, look up. A beautiful bridge in front of a waterfall will meet your eye. Up in the right hand corner of the park, there is a pavillion. In between, there are tōrō (stone lanterns), stones, shrubs and trees. The colors depend on the time of year, of course. In spring, there are magnolias, boke (Japanese quince), peonies and a variety of cherry trees with marvellous blooms, from early single blossoms to late, poufy pompon blossoms. But there is more, even after the sakura have fallen. 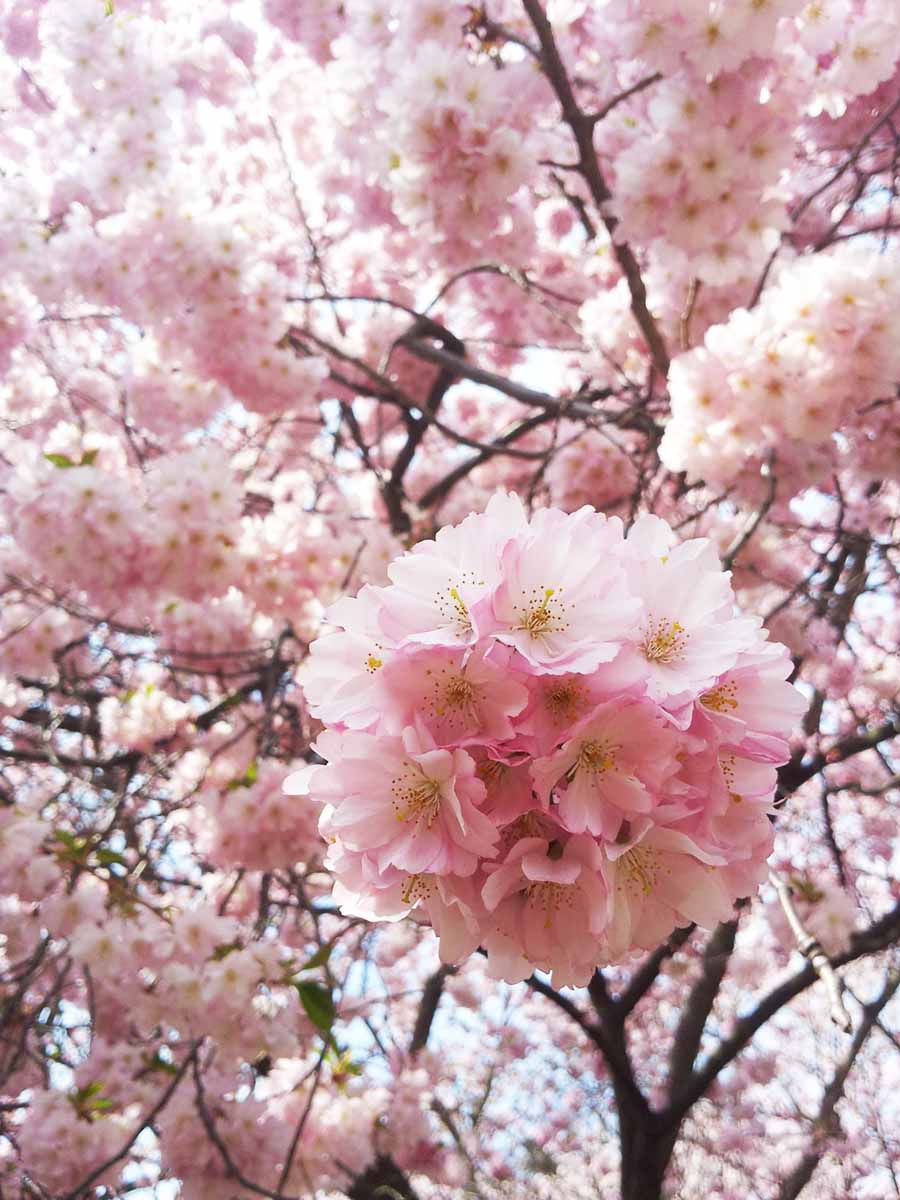 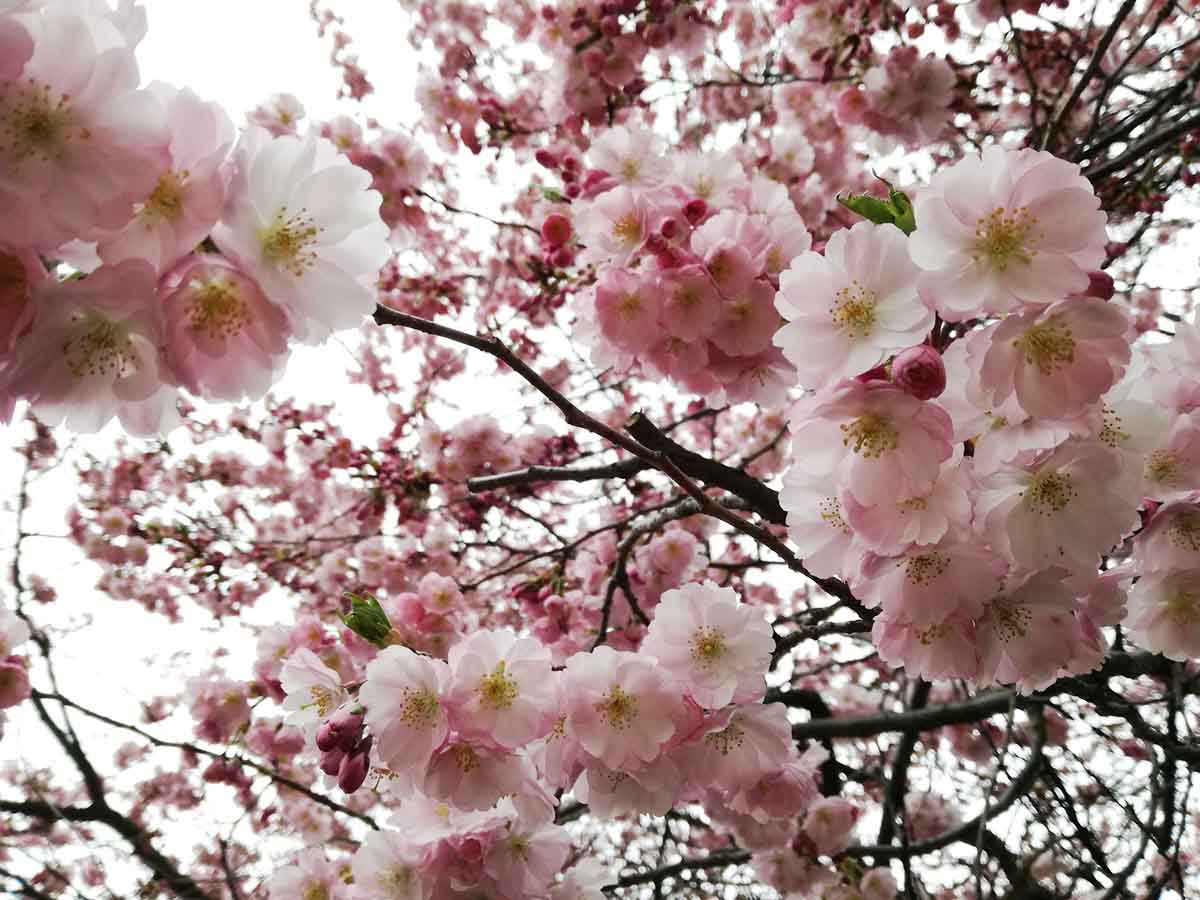 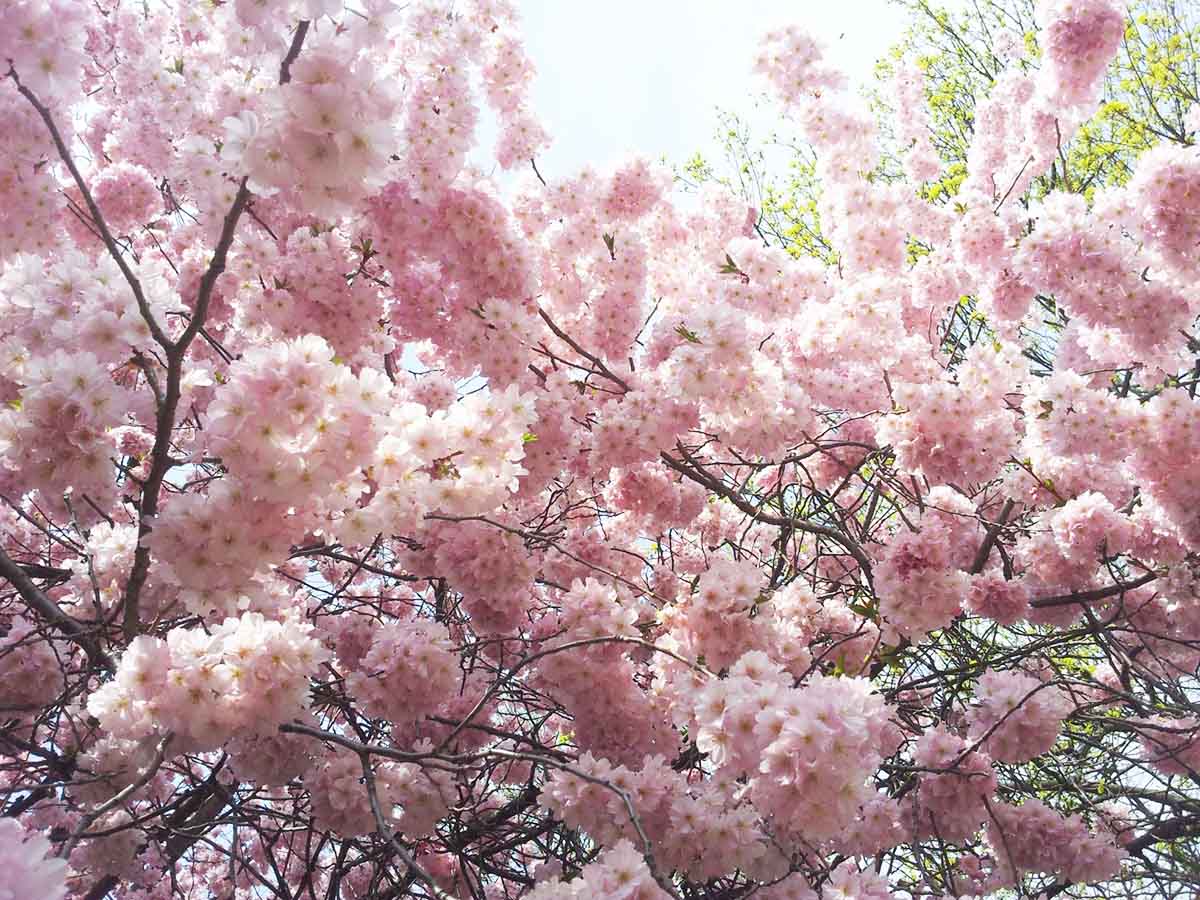 There are kikyō (Chinese bellflowers), yamabuki (Kerria japonica), irises, and Japanese maple trees. There are koi in the pond, small black fish, goldfish, frogs, and a heron. The heron eats the goldfish which is why there are many more black fish and less goldfish than when I started visiting the park in 2015 and wondered whether the fish would die from overpopulation at some point. The heron is not shy, either. In fact, it is quite the poser.

A place for contemplation 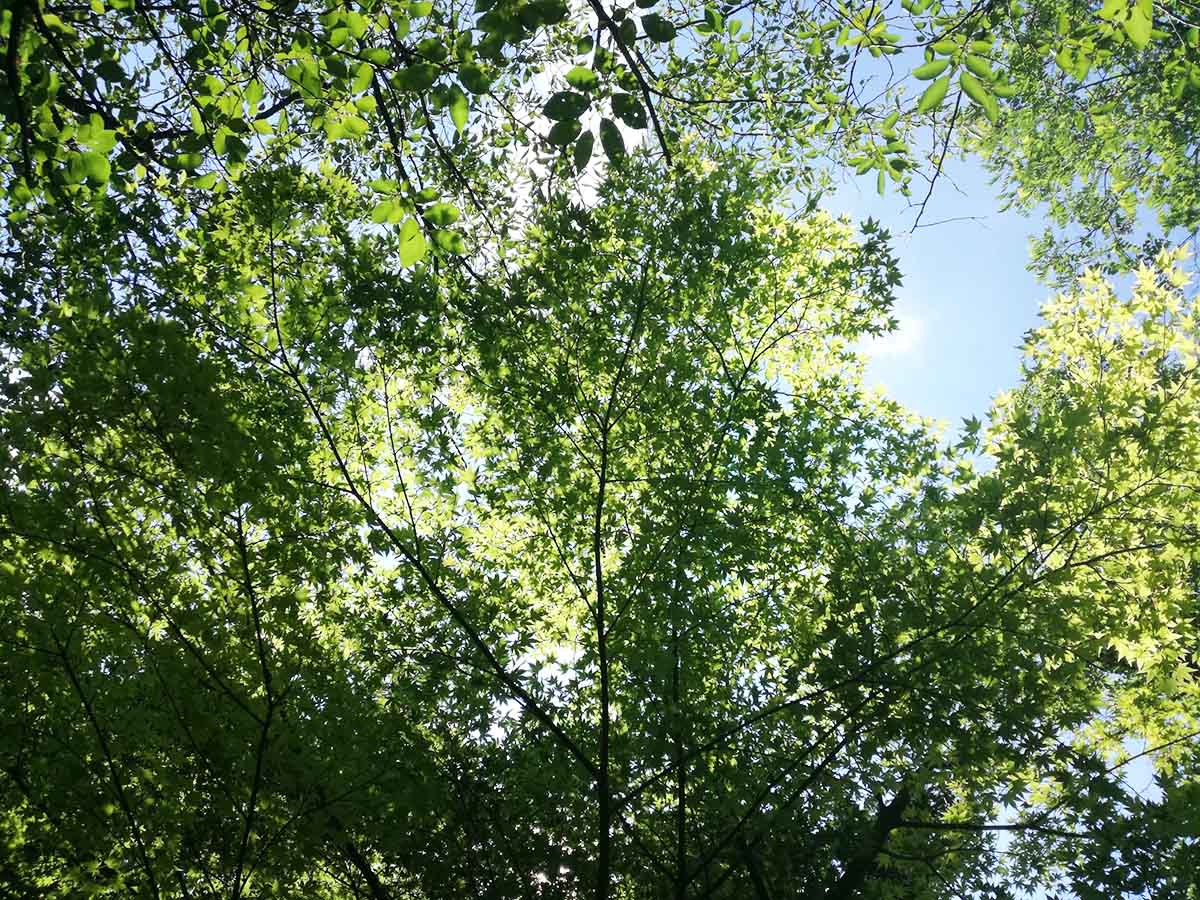 But overall, apart from those pink-tinged days in spring, when all kinds of people come for selfies, fashion shoots, wedding pictures, cosplay fotos and hanami, there is a sense of peace and quiet, of introspection. Of being removed from reality, even though streetcars, cars, and buses continue to rumble up and down the hill and construction is happening all around. You do not hear the S-Bahn, a mere 300 meters away, hurtling towards its final destination through what surely was once a small riverbed. You do not hear anything but birdsong, water, and trees, especially when it rains. Or on hot, sunny summer afternoons. Or on slightly chilly fall days, when the trees on the hills turn gold or red or brown much earlier than in the warm city center.

I go every spring to check whether the turtles have survived the winter. I go to see whether my favorite trees, shrubs, and flowers are still blooming. I go to see improvements – new gravel last year, new grass, fewer weeds, and major pruning this year – and decay due to popularity. I go to drink tea and eat cake or bento with my friends. If I want to be extra, I take a thermos full of hot water and some of my homemade sakura tea. I go when I am scared or stuck or tired. To breathe. I go to watch people and to flee people. I go and every time I am scared I will finally drop my phone in the pond while taking pictures of the water lilies. I go and google to find the names of plants and birds I rarely see, like the common chaffinch.

And when I leave, I sometimes walk up the hill a bit, to my favorite tram station in Vienna. If it is dark and it is raining and I have an umbrella, the lights of the tram coming down the hill are so like the eyes of a catbus, I always expect Totoro to show up next to me.

A librarian, historian and designer. Her interests can roughly be summed up as media analysis, art appreciation, creative production, and cats.