The capitalist system has been facing a multilayered crisis. The ongoing accumulation of capital and exploitation of assets – that vary from information systems to workers’ labor and natural resources – are gradually bringing humankind towards a disruptive point. Is there a solution, a viable alternative to solve this crisis from within the same system? Will it be possible later on to transcend it and transition to a new one?

Recently, I’ve written about an approach that helps corporations and companies shift towards a different way of conceiving finance and economy, that is to say putting purpose and accountability first, thus replacing profit as the ultimate goal.

Consistent with this topic, some weeks ago, Naho, Maike and I attended a very interesting event about Commons and Peer to peer approaches, hosted by Revision and P2P Foundation. The concepts and the ideas that emerged out of it prompted us to share a sort of introductory piece as it is about a matter of a certain relevance but also way too broad to be covered by a single blog post. Nevertheless, let’s navigate it together!

Landing on the Peer to Peer planet 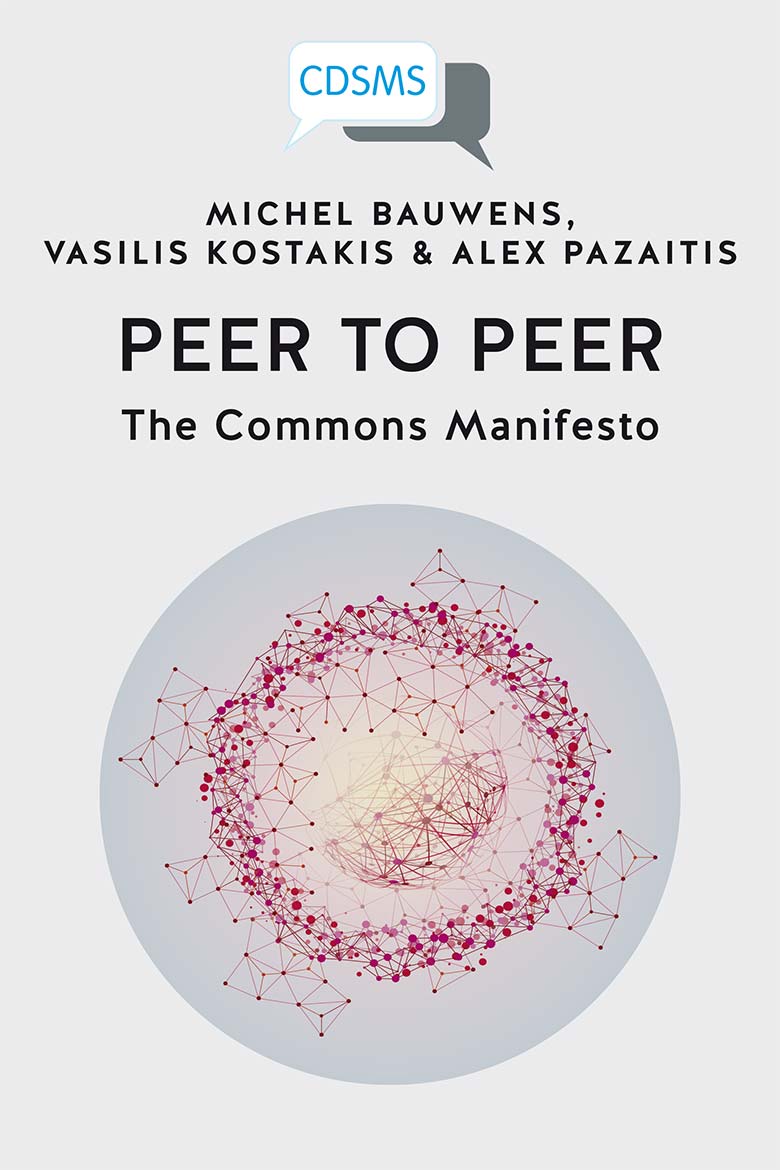 P2P Foundation founder, thinker and researcher Michel Bauwens has been invited to talk about the launch of the book he co-wrote with Vasilis Kostakis and Alex Pazaitis, “Peer to Peer – The Commons Manifesto”.

Peer to peer, person to person or people to people – aka P2P – is a relational process. It can touch diverse domains, such as technology, human interactions, society and politics. Yet, at the end of the day, its main goal should be to turn the world we live in into a better place.

The rise of the Internet as a social and technological watershed is a valid starting point to properly understand the concept of P2P. Initially, the direct interaction among computers and their capacity to transmit data and share files such as audios and videos have been labeled P2P. Computers stood on the same privileged level while being part of the same network.

Humans or users can also take over computers. They may come together to form a network where they collaborate with each other, generate value and share resources. Thus, a new social relational process arises: a peer to peer interaction.

So… what is “Peer to Peer” actually?

Peer to peer is a set of social relations, or a mode of relationship, that occurs in human networks.
Peers can cooperate with each other without any permission to be granted – meaning that all of them are free to bring their contribution. In this relational process, the equal members perform and produce together, while self-governing the production process and guaranteeing free access to P2P services and products.

There is almost no hierarchy within the P2P mechanism. That’s the almost that makes the difference, but why? The reason lies in the mutual coordination. Peers work together in the production process – they might design a product, a software, and so on; what counts is that there is no hierarchy within this process. What might sound “hierarchical” is the presence of some editors or maintainers that would carry out a task of overall quality-check of the product/service.

A shared resource can be created or maintained

Collaboration, production and generation of value, sharing… pillars that give a tangible shape to the set of social relations that is peer to peer. Moreover, P2P is bound to another concept that you may have noticed while reading the title of the book: “The Commons Manifesto”.

Commons is a key concept that is well expressed by the authors, and that Michel also clearly explained during the event. 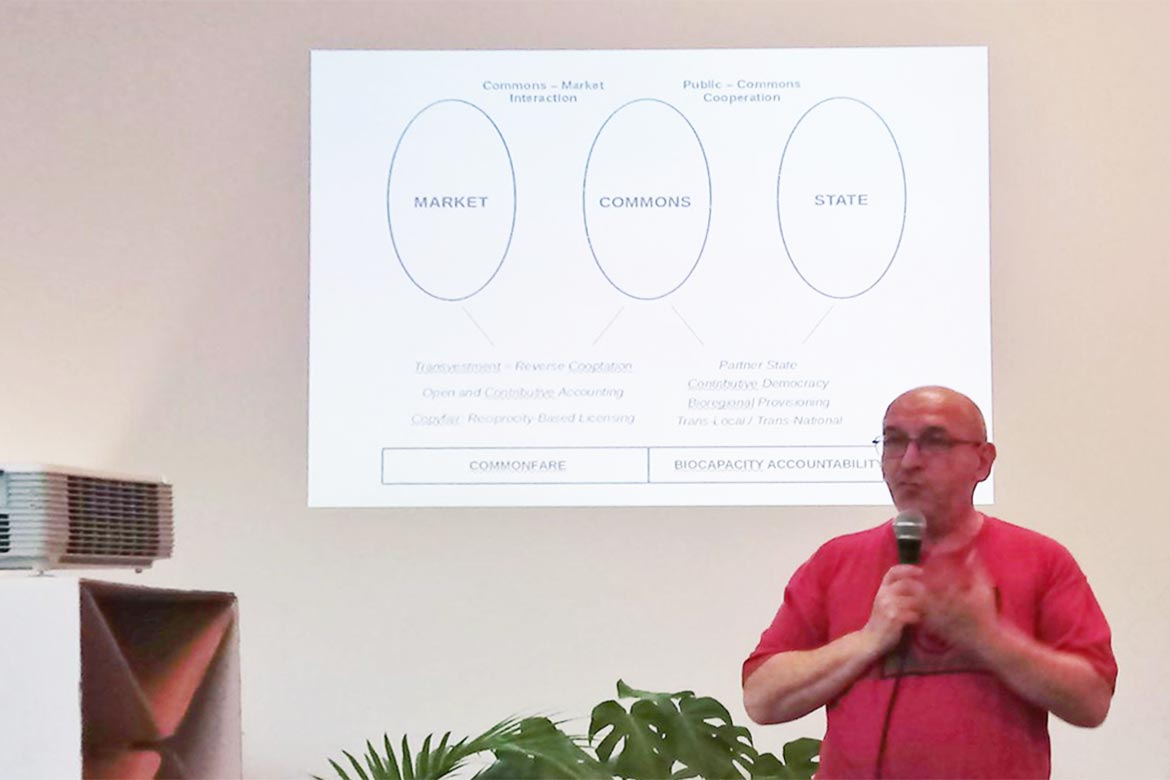 We are surrounded by resources, both inherited or created from scratch by humans. Wind is a resource, isn’t it? Soil as well: after all, we all eat products that have been harvested somewhere. Encyclopedia can be deemed to be another asset, too. What if these resources become shared?

That’s precisely where commons lie. Commons can be identified as systems where communers – users, members of a community – take care of shared resources through a self-organized structure and a clear set of rules and norms.

Did Wikipedia perhaps come to the surface of your thoughts already? Nowadays, the Internet arguably plays the most important role in the way society works. Digital commons of knowledge, software and design lie behind almost every aspect of our lives: we use digital platforms to connect to each other and exchange information, we design products such as artificial limbs via 3D printers, scores of people organize mass protests online and later on pour out in the streets, and so on and so on.

Therefore, three elements constitute a commons: a resource, a group of people taking care of it, and a set of norms. This set of norms concerns both the resource management and the way how the community itself functions. P2P stands behind these elements, as a sort of social glue that makes it all efficient and effective

Marxists and economists in general shall forgive me if they find the following brief description of capitalism too… simple. Yet, capitalism is strictly tied to the concept of “mode of production”, that is an umbrella term combining workers’ labor and a different range of means of production they use and/or are related to, to produce something. In turn, means of production are owned by owners/capitalists whose goal is to gain maximum profit out of the product/service.

Once the product is ready, it is distributed/allocated in the market through a given price. Owners aim to accumulate capital to benefit from the value that emerges out of the sale of the product and the whole amount of costs used to produce it – namely the surplus value.

Although capitalism transcends what said above, a short introduction of the concept of “mode of production” was needed, as P2P also implies a peer production model and a way of allocating resources that might become a mode of production itself.

P2P and commons-based groups/communities are currently part of the capitalist system – but they represent quite the opposite dynamic. It is true that their production of knowledge, information, platforms, products, services and so on – the commons-based peer production – depends on initial capitalistic support to thrive.

Digital commons such as Wikipedia, Mozilla Firefox, WordPress or Linux have been conceived and designed in the capitalist era, after all. Yet, they represent a model of commons-based peer production that at some point might take over the current system, and lead a new post-capitalist era.

Within the framework of already existing commons and those that will pop up in the future, there should be no corporate hierarchy that dictates the work and how the whole system moves on. Rather, commoners will go through a mutual coordination of practices and creation of products and services through open and transparent systems, where everyone is motivated to contribute because they might believe that there are a meaning and a purpose behind.

While nowadays there is an accumulation of capital and exploitation of resources, one day there might be an accumulation of commons and a huge pool of shared resources. Commoners would become more independent – financially speaking – and would live in a more sustainable world.

A prospective model of a new society will revolve around the idea that every citizen could actively contribute and participate to the creation of something that is valuable and good for the whole society, both locally and globally speaking. States and markets will perhaps not disappear, yet they will be sort of steered by the commons.

A P2P and commons-oriented social transition will probably not be so easy and without implications of any sort. Nevertheless, as the ship has already raised anchor, the transition will either occur on a large scale, thus becoming the dominant socioeconomic system, or on a more intermediate level, still influencing the relationships among humans.

The future may have an outline: shall we all give it an ultimate shape and fill it with colours?

Header picture by Papaioannou Kostas on unsplash. Thank you <3