Dazaifu is a small city just a short train ride from Fukuoka in the North of Kyūshū. The third part of our mini series introduces you the most wonderful temples and further spots where you can enjoy Japan’s exceptional synergy between cultural heritage and top-notch arts.

If you want to learn more about the basics of Dazaifu, including some historical information, access and public transport, you should first read part one of this mini series. If you are a shrine nerd, you find all the information you need in part two.

Dazaifu is also home to interesting temples and an absolute must see is the Kōmyō-zenji, a zen temple with the only genuine kare san sui garden, landscape garden without water, in Kyūshū.

Kōmyō-zenji was built in 1273 by Tetsugyū Enshin (1254–1326), a former nobleman of the Sugawara family like Sugawara no Michizane and then monk of the Tōfuku-ji Rinzai school. He was a follower of Enni Ben’en (1202–1280), the founder of the Tōfuku-ji monastery in Kyōto, which is home to one of Japan’s most prolific stone gardens.

The temple was initially used as the family temple for the priests of Dazaifu Tenman-gū, which changed in the beginning of Meji era towards the end of the 19th century. When Buddhism and Shintoism became separated, Kōmyō-zenji was detached from Dazaifu Tenman-gū. 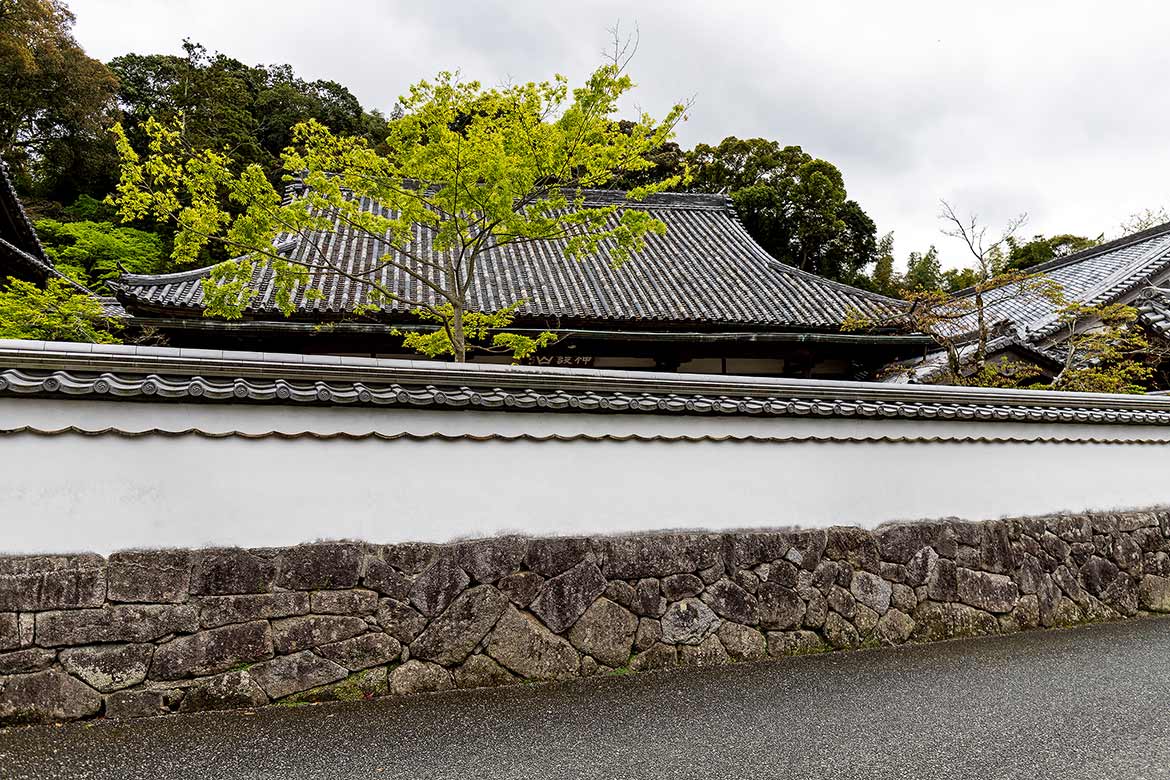 Temple wall and building roofs of Kōmyō-zenji, which is home to Kyūshū’s only genuine dry landscape garden.

To reach the attractive temple, you can either take an alternative route from Dazaifu Station to Dazaifu Tenman-gū and Kyūshū National Museum or pay it a visit on your way back. It is officially opened all year round from 8 am to 5 pm, but closes on occasion. Apparently, an elderly man is taking care of the temple and sometimes unpredictably doesn’t have enough energy to open it for the public. Unfortunately, I came to visit Kōmyō-zenji on a day it was closed, so this passage speaks more about my desire to return than my actual experience. 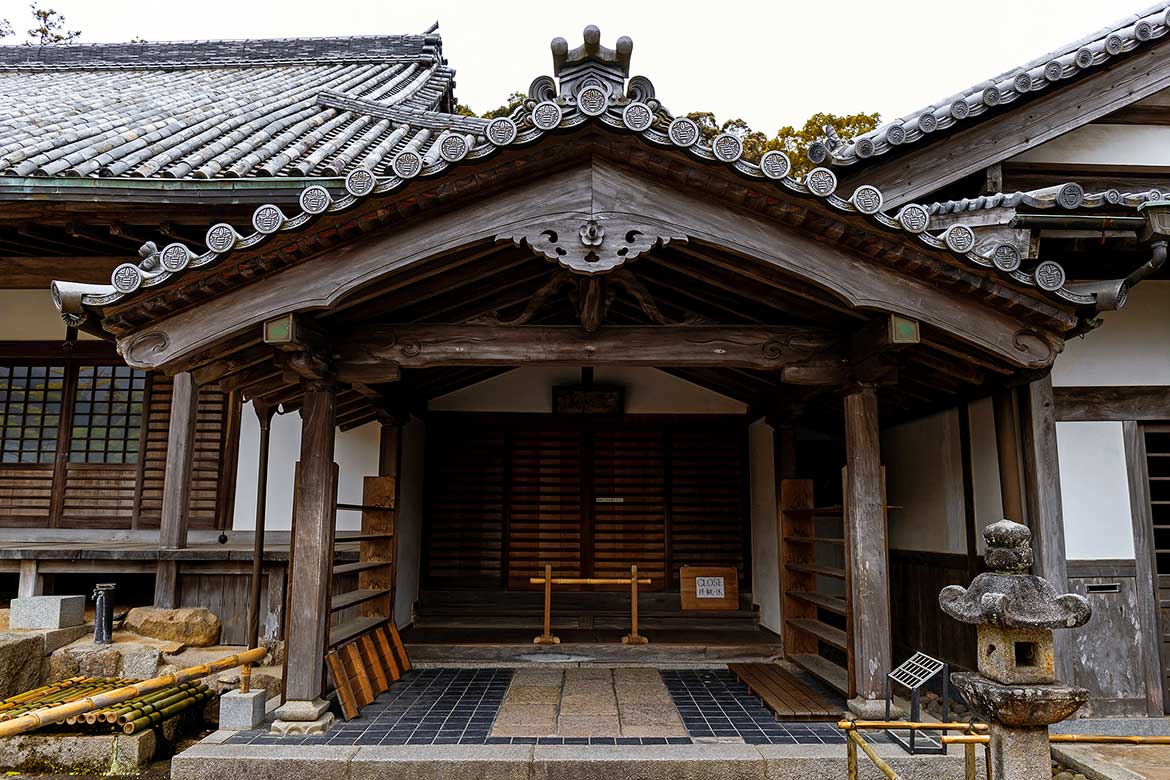 Entrance to Kōmyō-zenji, unfortunately closed at the day this picture was taken.

But be assured, even a visit without being able to enter the temple itself is worthwhile. The small zen stone garden in its front is opened even on closed days—but taking photos is not allowed. This calming gravel garden has fifteen rocks which are arranged in the Chinese character „光“ (light), the first character of the temple’s name and a reference to Buddha’s halo.

The famous Itteki-kai-tei, literally „one drop ocean garden“, though, is located in the back and is said to be especially appealing with autumn foliage when the maple trees turn fiery red. White gravel fields represent the ocean, while stones and lush moss fields depict islands. With its 49 types of moss, the garden is one of the most famous gardens in West Japan and gave Kōmyō-zenji the nickname Koke-dera, moss temple.

Can you imagine the tranquility of having the view on this stylish garden while hiding from heat and humidity in the shadows on the temple’s porch? Inside the wooden buildings itself you can take a look at pieces of Buddhist art as well as Buddha figures, including a statue of Bhaisajyaguru or Yakushi Nyorai in Japanese, the Buddha of medicine.

Within a short walking distance from both Kōmyō-zenji as well as Dazaifu Tenman-gū is the Kyūshū National Museum, which is great for an educational trip and on a rainy day. It is only the fourth of its kind and even though the museum isn’t as large as the ones in Tokyo, Kyoto, and Nara, your trip to Dazaifu wouldn’t be complete without it.

Designed by Kiyonori Kikutake, who was one of the founders of the architectural metabolist movement and architect of Edo-Tokyo Museum among others, the Kyūshū National Museum opened in 2005. While the inner cedar wood structure, built with Kyūshū woods, will give you a traditional feeling, the museum’s surface has a contemporary appearance.

In the shape of a large wave or cloud, the blue glass building reflects the surrounding trees and has a certain look of an amorphic spaceship. It also implements eco-friendly technology with features such as a solar power system on the roof. The museum also collects rainwater, which is stored underground, filtered, and then used for toilet flushing, landscape irrigation, and such. 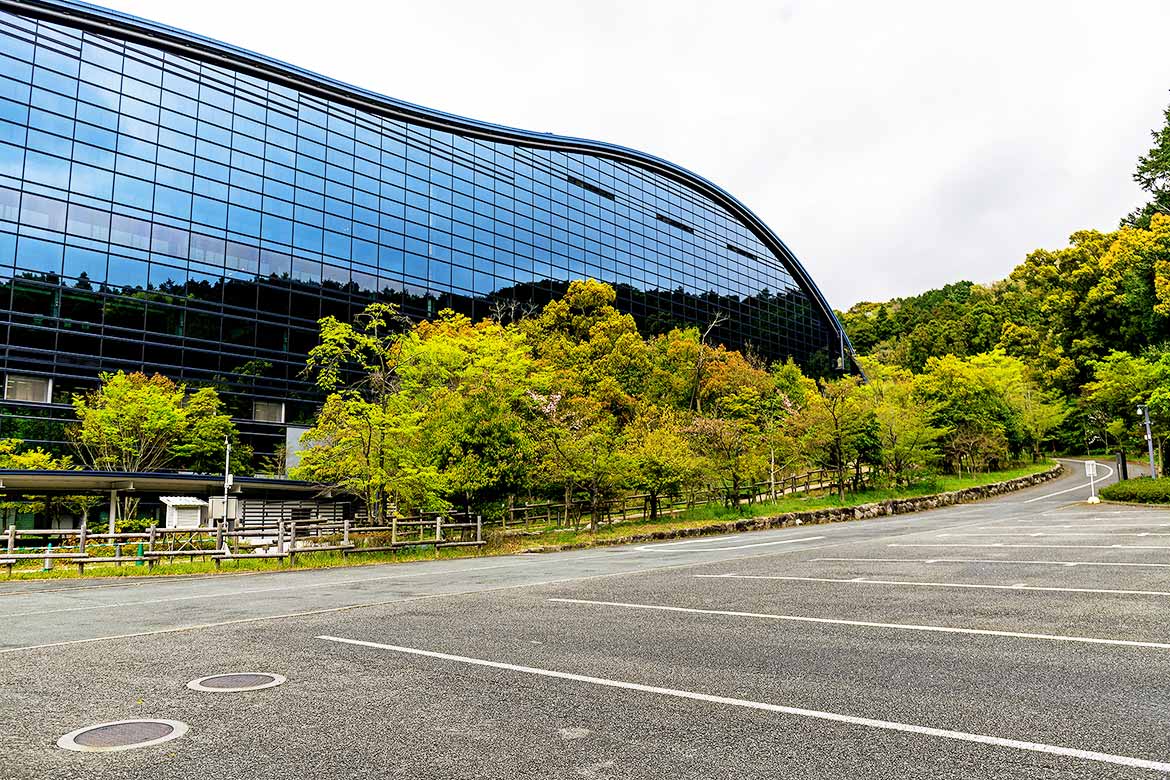 When entering the permanent exhibition, you’ll easily grasp the museum’s emphasis on the cultural exchange with Asia, which honors the historic importance of the place. Divided by periods in Japanese history from Jōmon era until Edo period, the exhibition’s five areas allow you to explore the exchange Japan had with mostly Asian nations.

While walking through the rooms you might notice that a bit of time has passed since the museum opened. The exhibition design is not state-of-the-art, but very modern with anti-glare glass, on point spotlights, and a well balanced selection that delivers a bunch of information without overexerting visitors. The curators exchange the exhibits frequently and also put non-Japanese pieces on display to illuminate the influence of foreign cultures on Japan’s cultural history. 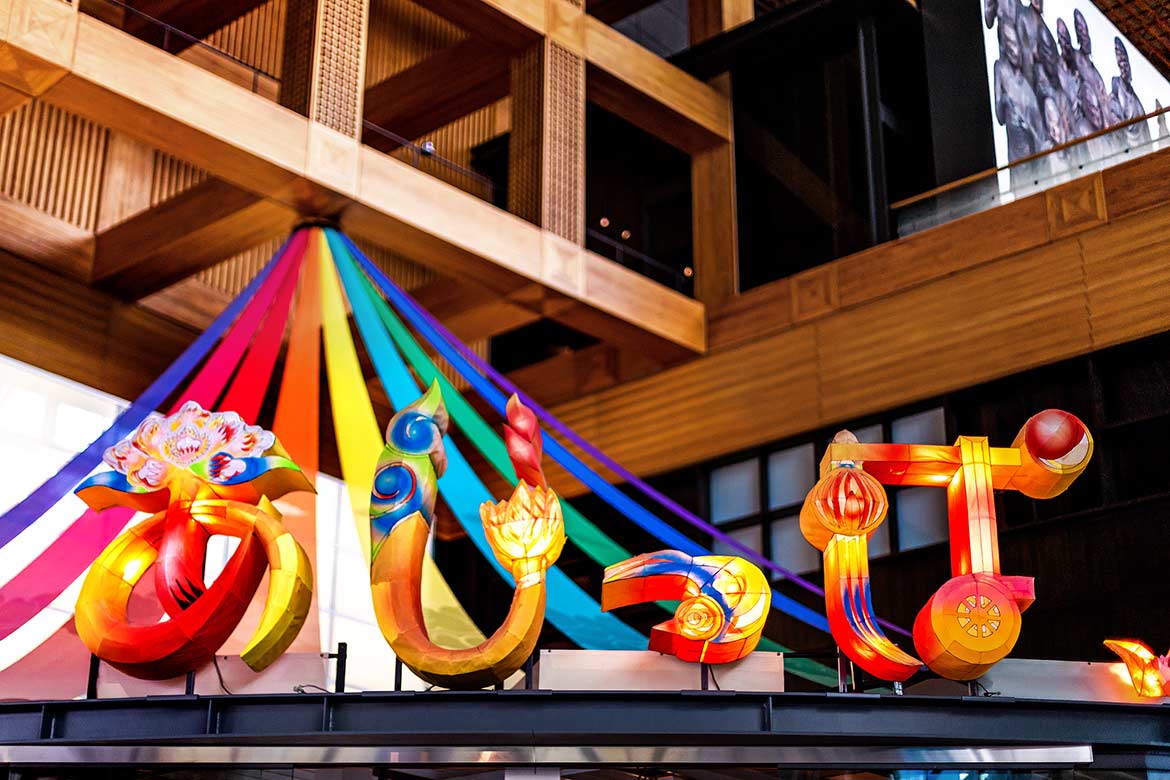 Ajippa, a free exhibition space at Kyūshū National Museum with a hands-on experience of folk toys and cultural items from different countries all over the world.

The museum is equipped for all sorts of visitors. It is barrier-free, has medical rooms as well as a nursing room, and allows assistance dogs. Or are you coming with children, who become grumpy in museums? Then, you should go to the free exhibit space called Ajippa, short for Ajia no harappa, translating into „Asian playground“. It shows folk toys and cultural items from several Asian and Western countries, with which both young and adult children can discover Japanese and foreign cultures in a hands-on experience.

About three to four special exhibitions each year, ranging from modern art such as van Gogh’s paintings to traditional Japanese art objects, expand the museum’s offering even further. You can visit a tea house and there are performances and plays in a seated theater hall. There is also a so called backyard tour on Sundays, which leads to the storehouse and restoration rooms as well as the seismic isolation structure in the ground. Damn, if only I had known about that tour when I was visiting Kyūshū National Museum.

But I enjoyed my time there thoroughly without the tour as well as any special exhibition. The museum’s building seems massive when you enter, but spending your time here is actually refreshing. You may even want to stay for lunch or a snack here and get some more souvenirs in the magnificent museum shop.

All in all, it is possible to visit the attractions mentioned in this mine series within one day if you arrive early and have a quicker speed. But when you prefer a calm pace and taking your time, I suggest to spend two days in Dazaifu with either staying overnight or go back to the close-by Fukuoka by dinner time.

Here are a few further spots to check out, if you find that the above introduced itinerary still isn’t enough for your curious feet! All of them lie in the west of the described locations and I personally haven’t seen them myself yet. 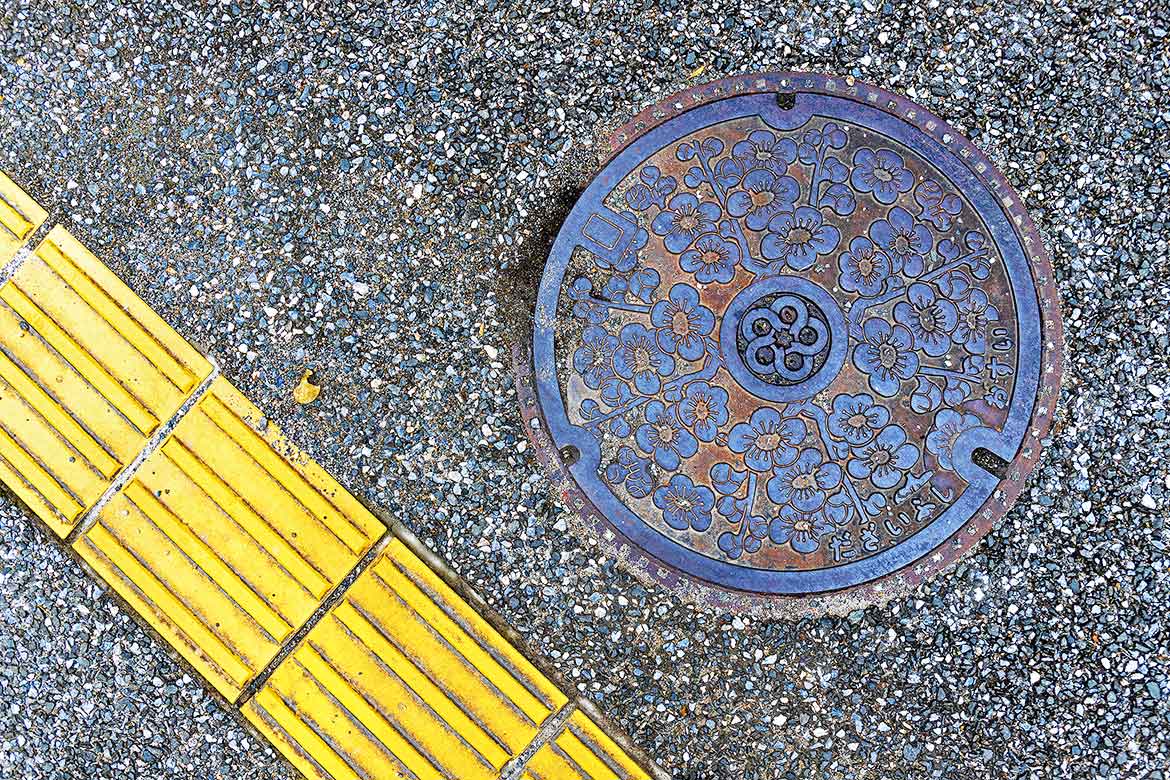 Manhole cover with ume blossoming twigs and the city emblem, yet another rendering of the ume blossom.

History buffs might be interested in the Dazaifu Government Office Ruins, the historical site where Dazaifu once controlled the affairs of all Kyūshū. As the name indicates, only ruins can be seen, but signboards provide information in Japanese and the adjacent park has a nice appeal to spend some resting time or a hanami—blossom watching—picnic.

The temples Kanzeon-ji and Kaidan-in lie next to each other and a bit closer to the previous destinations than the office ruins. Kanzeon-ji was completed in 746 after 80 years of construction. It is most famous for its bronze bell from around 698, which is one of the oldest in Japan and a designated National Treasure. The temple has been the most influential Buddhist institution in Kyūshū and exhibits Buddha statues from Heian period until Kamakura period in its treasure hall today.

The Kaidan-in was established in 761 by Jiangzhen, Ganjin in Japanese, a Buddhist monk from Tang dynasty China. Until 1703, the temple was actually a part of Kanzeon-ji, where monks and nuns were ordained. Its ordination platform still exists today and is said to contain soils from India, China, and Yamato, today’s Nara.