Even after leaving the top ten travel destinations behind, Japan is presenting you an abundance of beautiful spots. Among them is Dazaifu, a small city just a short train ride from Fukuoka in the North of Kyūshū. It is just the place for you when you love Japan’s exceptional synergy between cultural heritage and top-notch arts.

The rich traditions of Dazaifu’s shrines and temples are complemented with contemporary design, art, and architecture. In the Kyūshū National Museum, you can learn about Japan’s cultural history to round up your trip. But before you leave, don’t miss a stop at one of Japan’s most unique Starbucks branches, which was designed by Kengo Kuma and Associates who are deeply connected to NION. 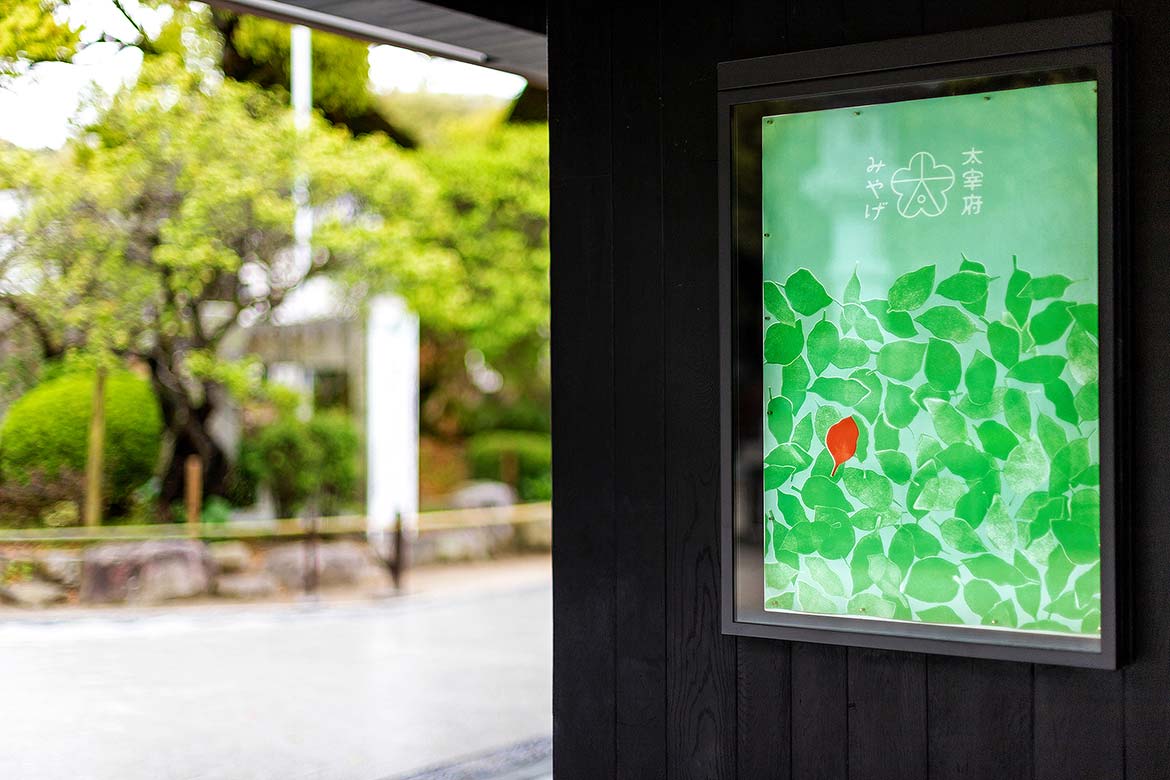 A poster at Dazaifu Tenman-gū’s information center and shop, shot in April 2019. It says „Dazaifu O-miyage“, Dazaifu gifts, and is changed according to the season.

From Nara era, through Heian times, until Kamakura period, Dazaifu held the imperial office of Tsukushi, today’s Kyūshū. Administrative and military decisions were made here and foreign relationships were cultivated with the embassies of China and Korea.

In Muromachi period, the city lost significance after the Mongol invasion and due to the decline of imperial authority. But even though the political center had been moved back to Hakata, today a district of Fukuoka City, it seems like Dazaifu could keep some of it wealth.

Unlike other smaller cities in Japan, you won’t notice a slow weathering with shops gradually closing and the youth disappearing to the big cities. Instead, taking side streets during your visit offer pretty surprises in form of decorative doors and walls or an occasional tiny shrine or Buddha figure. 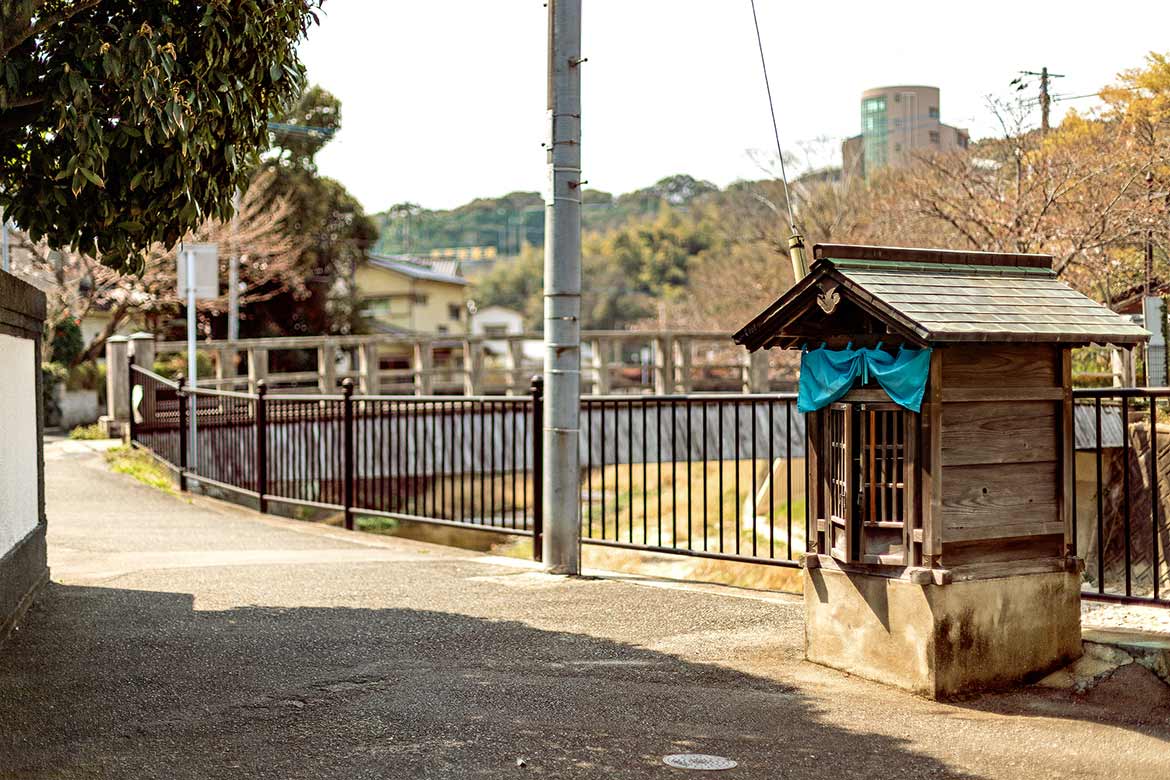 Inside Dazaifu City a small shrine alongside the river Mikasa-gawa.

In Heian times, Dazaifu was also a place of exile for high-ranking courtiers. Among them was the renowned politician, scholar, and poet Sugawara no Michizane (845–903), who fell into disgrace after a rivalry with a member of the powerful Fujiwara family, Fujiwara no Tokihira. Demoted and exiled for life, Michizane eventually died in Dazaifu and was buried there.

But disaster struck so many times, that it was believed, his resentful spirit brought misery over Heian-kyō, today’s Kyōto. The capital suffered from drought, plague, rainstorms, and floods. Lightning stroke the Imperial Palace multiple times and several sons of the emperor died. To calm the seemingly revengeful Sugawara no Michizane, his title and office were restored, records of his exile destroyed, and the shrine Kitano Tenman-gū in Kyōto was built in his honor.

Yet, even that wasn’t enough and disasters continued, so Michizane was deified as Tenjin-sama and Dazaifu Tenman-gū built on his resting place. As a matter of course, Tenjin was regarded as a god of natural disasters and revered to prevent them for the first centuries. In Edo times, though, scholars and educators recalled Sugawara no Michizane being one of the greatest poets and scholars of Heian period. A shift made Tenjin what he is today: The patron of scholarship, god of education, and by extension god of literature and god of arts. 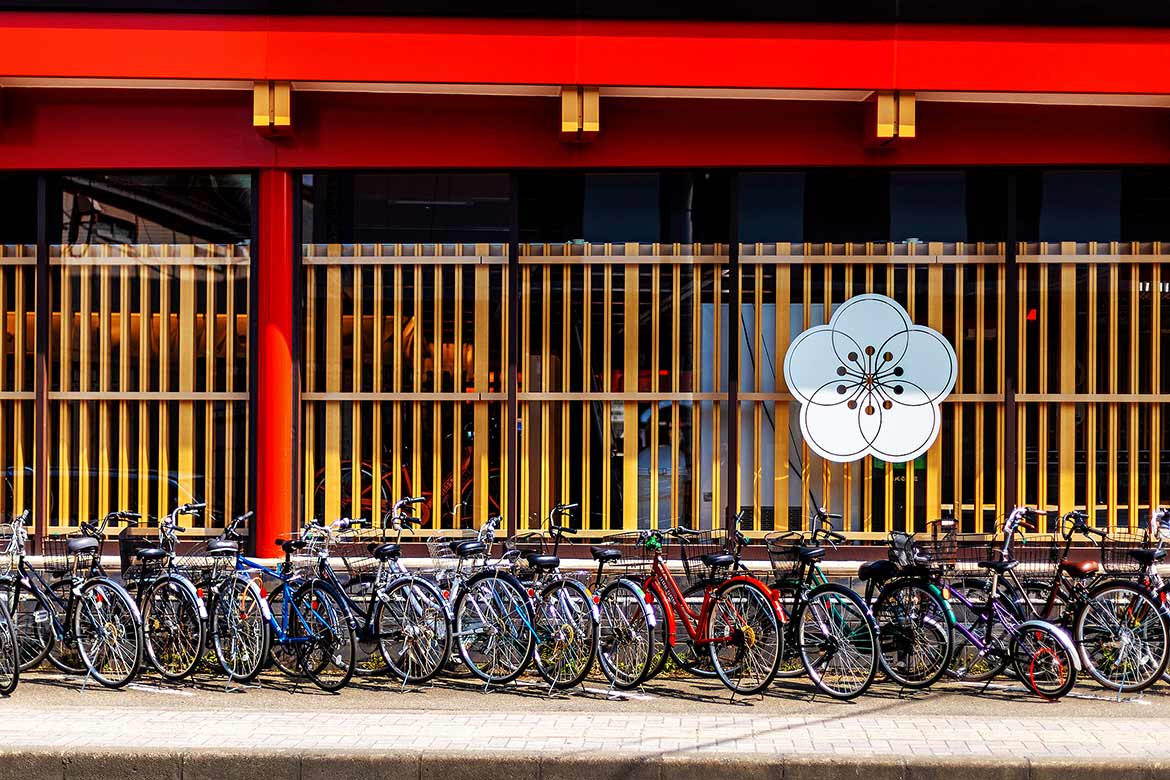 An outside view on Nishitetsu Dazaifu Station reflecting both its traditional as well as modern aspects.

When arriving in Dazaifu by train, Michizane’s love for the ume, a fruit tree with blossoms heralding the beginning of spring, becomes immediately apparent. The modern station building implements traditional aesthetics and red ume blossom crests on white banner rows lead the way to the exit. Following the crowd at the well-spaced station forecourt, you turn right and enter Dazaifu Tenman-gū Omotesandō.

Walking along the in anthrazite, chrysanthemum patterned cobblestones paved pedestrian street, gets you in the mood for the divine grounds of the main shrine. You might want to take your time reading some of Sugawara no Michizane’s poems on the way if you understand Japanese or find some souvenirs and gifts in the beautiful shops.

Don’t forget to treat yourself with a warm, freshly prepared ume-gae mochi, a Japanese snack with a rice pastry crust and red bean filling. With their savory-sweet blend and a slight grill aroma, ume-gae mochi are less sweet than other Japanese confectionary and just so very delicious. It is said that one of Michizane’s caretakers made them for Michizane and left one as an offering after he passed away. 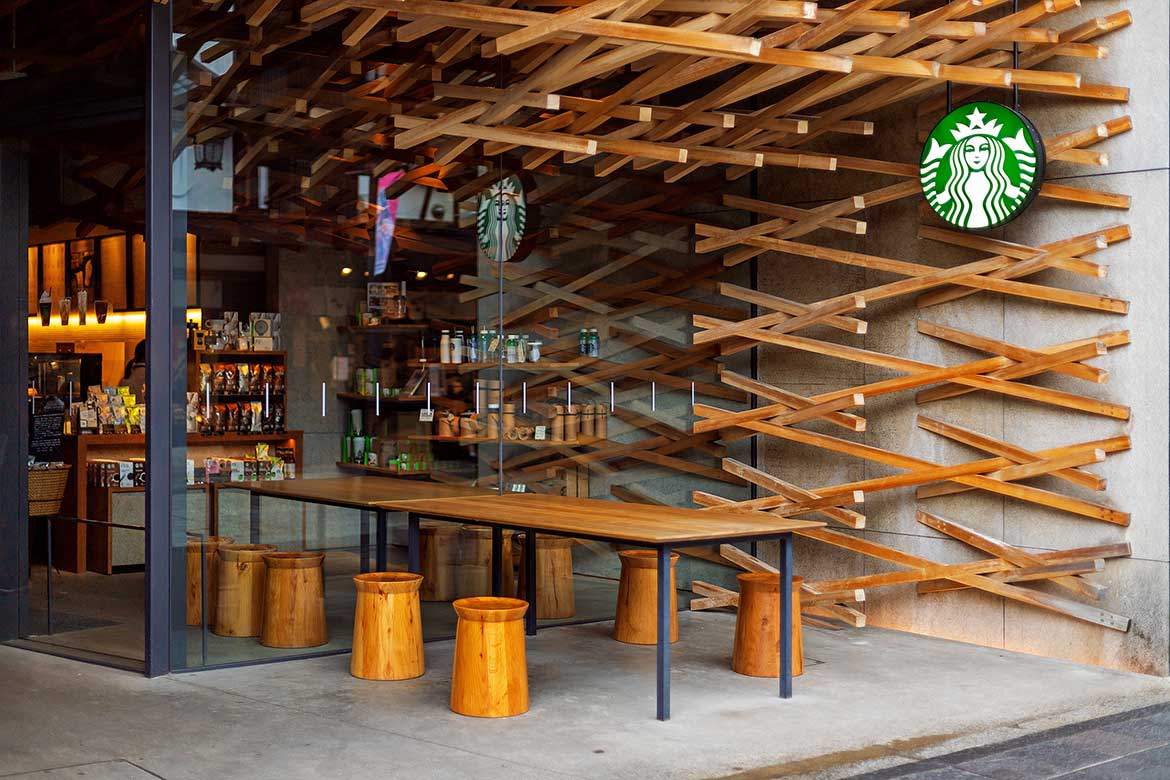 If you crave some more Western snacks or a hot beverage, the local Starbucks branch might be your deal. As a specialty, they serve an espresso version of their Yuzu Citrus and Tea drink here with espresso instead of English breakfast tea. But the coffee shop should be on your list even if you don’t plan to pay it a visit.

Designed by Kengo Kuma and Associates, its architecture catches your attention with rhombical intersecting wooden beams. Your view is automatically guided through the glass front along a tunnel of the crisscrossing structure to the back of the coffee house, where a small Japanese garden offers a tranquil view to the outside. A long picture with the common motif combination of ume blossoms and white-eye birds, mejiro in Japanese, as well as a diamond lattice varnish layer connects the modern interior with the history of the location. The painting seems to be switched according to the seasons, so you should probably come visit again another time. 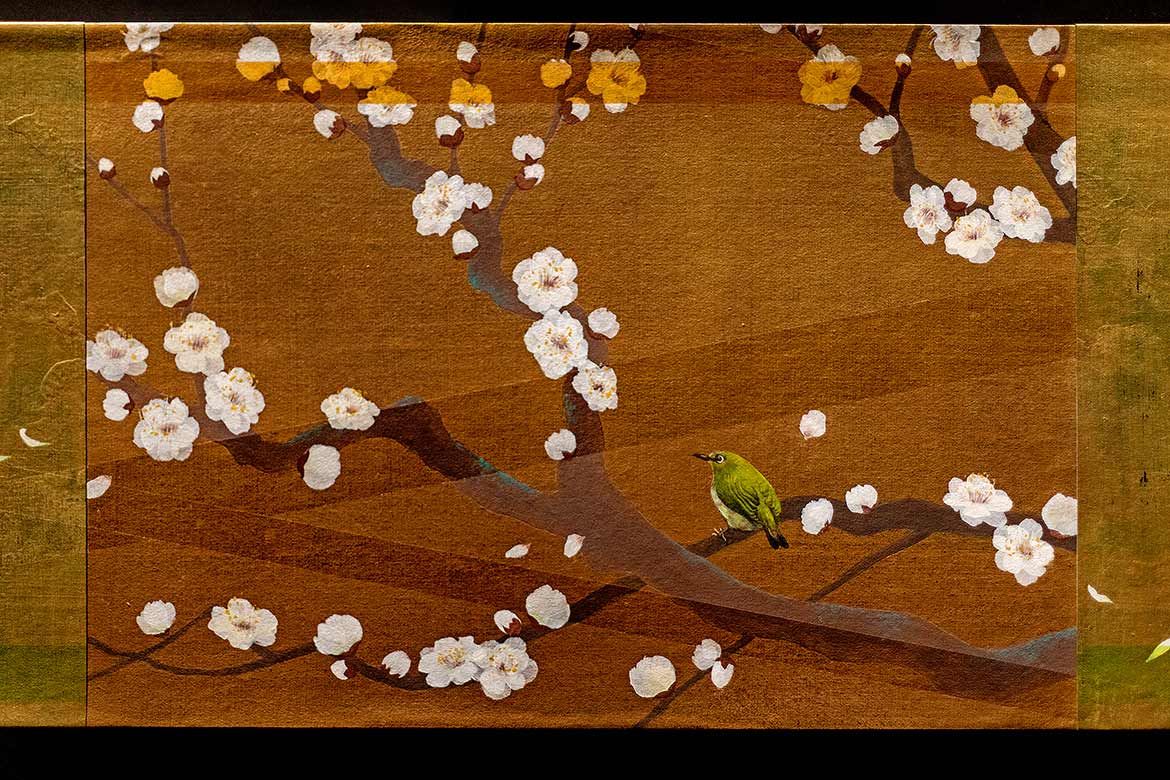 Painting inside Dazaifu’s Starbucks branch with blossoming ume twigs and a white-eye bird, mejiro in Japanese.

By train: It is most convenient to get to Dazaifu by train. Board the Tenjin-Oomuta Line at Nishitetsu Fukuoka Station (close to Tenjin subway station) and get to Nishitetsu Futsukaichi Station. Change into Dazaifu Line there by following signs, which are also provided in English. Then, arrive at the terminal Nishitetsu Dazaifu Station two stations and five minutes later. The whole journey costs 400 yen. The trains go regularly, are usually crowded, but not overly packed.

By bus: There must also be a bus from Hakata bus terminal, which is a five minute walk from Hakata Station. The ride takes 45 minutes and costs 600 yen.

By car: When traveling by car, you should probably check first where to find a good parking area. I couldn’t find proper information, but can imagine that the parking spot of the Kyūshū National Museum could be an option for 500 yen per time.

Getting around: Essentially, all cultural highlights of Dazaifu are accessible on foot. But if you want to get to Kamado-jinja by bus, turn left when exiting the main exit of Nishitetsu Dazaifu Station. There is a bus stop on the other side of the street, parallel to the station. Digital displays announce the upcoming busses in Japanese and English. Take a bus bound for Uchiyama and get off at the terminal Uchiyama (Kamado Shrine) bus stop. For other directions, you may ask the staff of the tourist information center inside Nishitetsu Dazaifu Station. They do have English speaking staff as well.

Learn about Dazaifu’s variety of shrines in the upcoming second part of this mini series.