How I became obsessed with waste separation in Japan

Recycling and waste collection systems vary all over the world. The rules for separating trash in Tokyo are definitely different from those in Berlin. Besides, you have to worry about another type of garbage almost every day.

I grew up in Freiburg, a so called green city in the South of Germany, where waste separation was already a thing in the eighties. Since then I have lived in several cities with different approaches to handle waste and the strictness of its separation.

When I lived in Japan three years ago, I had to think in two new big categories: combustible and non-combustible. For this, in my first shared apartment, located in the western suburbs of Tokyo, we used special plastic bags that were available in the supermarket – an easy way to pay the fee for the garbage disposal.

I lived with a Japanese guy who didn’t take much time to explain to me the details of waste separation. That’s why I often trusted my gut feeling if an object was combustible or not. No wonder I was frequently confused about the objects he – in my opinion – had thrown into the wrong bag.

Turned out I had a pretty romantic idea of what garbage to burn: paper, wood, food scraps, fabric, wool – but by no means plastic! In Japan, plastic burning is even considered as being part of the official recycling process which misleads to very high recycling rates.

Every day was trash day

After three months, I moved into a small one-room apartment in the eastern part of central Tokyo. Fortunately, I got a detailed list from the property manager that explained the different categories and on which day I had to put what kind of garbage in front of the house.

Combustible garbage would have been picked up on Monday and Thursday: paper, rubber, leather, CDs, plastic products, fabric, diapers and food waste. I collected the latter separated from the rest in a covered mini waste bin next to the sink to keep the cockroaches away, as my regular garbage cans in the apartment had no lids. But at least I could now use normal and quite cheap plastic bags instead of buying specific ones.

Every Tuesday it would have been time for the following categories and different containers set up only on this day in front of our house:
1. newspapers, cardboard and milk cartons that would have been washed beforehand, cut or torn apart and then dried – all held together with a thread.
2. aluminium and steel cans
3. PET bottles that have first been rinsed and then compressed and rinsed glass bottles – both without lids because they would have been picked up on Mondays and Thursdays with the combustible waste.

On Saturday, plastic and polystyrene packaging bearing the recycling symbol would have been collected. If there were any food leftovers on it, I had to rinse them beforehand though. Otherwise I had to throw them into the combustible garbage bin.

Since the size of my apartment was only 11 square meters, all the garbage cans and bags took up quite a lot of space. And hence almost every day was garbage day even my mind has been occupied with too many thoughts about waste. (In Berlin I can throw things away whenever I fancy, because the different garbage bins are always available, located in the backyard of my building.)

Another complicated thing was the lack of trash bins in public spaces. Therefore, I always carried a tiny plastic bag with me to dispose my trash later – either at a convenience store or at a station, but most of the time at home. 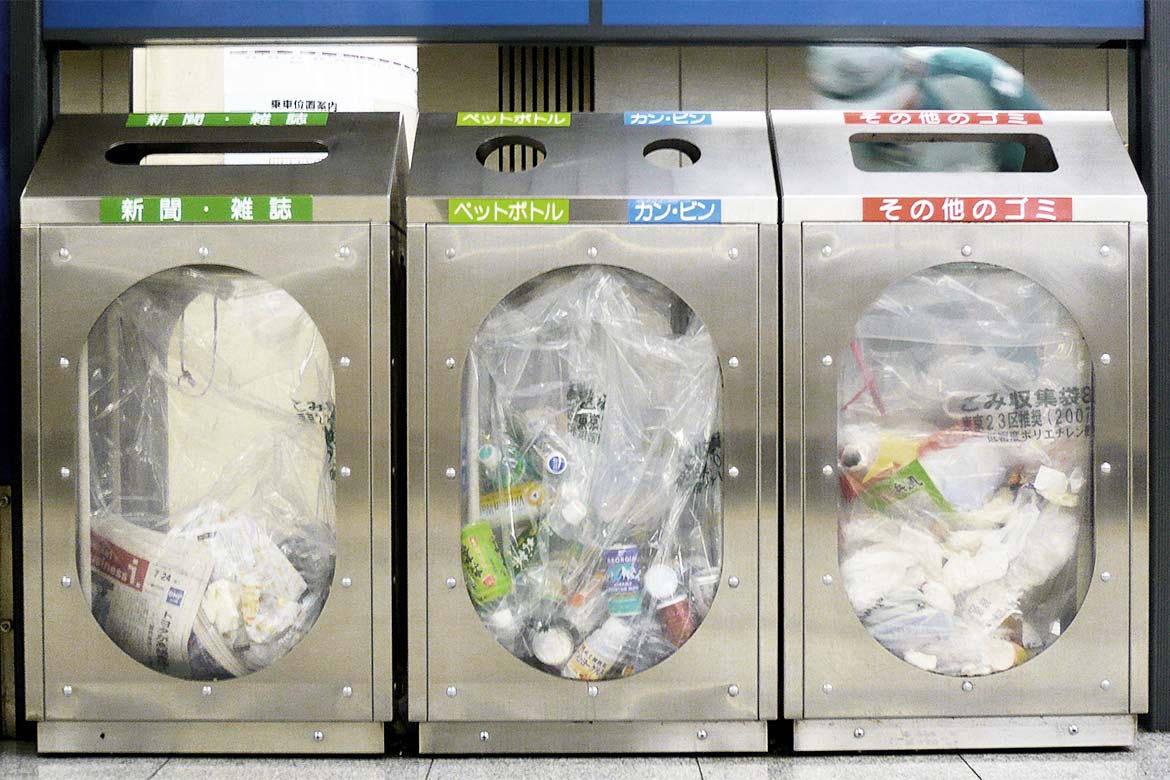 Japan’s awareness of the plastic problem is slowly changing

Japan is known for an excessive packaging practice and sometimes it was quite overwhelming that so many things were wrapped up so many times. Obviously, the average Japanese person generates 1.8 kilograms of plastic waste during a period of three weeks and the amount of microplastic waste in the seas immediately surrounding Japan is much as 27 times bigger as the amount in the world’s oceans on average.

But I hope things are slowly changing: on this year’s Zero Waste Day at the end of May, Tokyo Shinbun published a huge editorial with “Plastic Floating in our Seas” as a headline. To gain attention for this topic, they carved the whole editorial page into the sand of a Japanese beach and took pictures of it.

Japan also plans to make it mandatory to charge for plastic shopping bags at shops and supermarkets. This is quite a thing! It was always a challenge for me being fast and loud enough to tell shop assistants that I don’t need a bag – especially at convenience stores where they were trained like machines to put everything in plastic bags. It has been a bit easier when I lived outside of Tokyo. There, the Seven Eleven evening shift guy knew me after a while and always praised my eco bag.

I haven’t been to Japan in two years, and I am really curious if I can spot a difference regarding the use of plastic during my next visit.

Header picture by Koukichi Takahashi on unsplash, trash picture by S. on CC-BY-SA 2.0 licence on flickr. Thank you <3