How a sugar-free diet will make you feel more Zen

We have too much stress. Hardly anyone will deny that. No wonder that ancient traditions are experiencing a revival. This includes Zen Buddhism, which originated in China and is derived from the Sanskrit word Dhyana, which means “immersion in a meditative state”. But one does not have to resort to meditation in order to feel calmer in everyday life.

Always focus your attention on the task at hand. This is the message that Zen gives us. No acrobatic exercises or months of preparation are needed. It is so simple that it almost sounds too good to be true. The same applies to our daily sugar consumption. Most people are not aware of how much sugar is in our food. Even less widespread is the knowledge about the health consequences of sugar and the blood sugar regulating hormone insulin.

Neither Zen nor a sugar free diet offer promises of salvation, esoteric knowledge or are miracle cures. The latter is currently being scrutinized by scientists. The spread of diabetes and other serious diseases associated with too much sugar in food is attracting the attention of the public and doctors.

Numerous studies have shown this: The consumption of too much sugar has a negative effect on health and cognitive abilities. But that’s not all. Too much insulin, the sugar- regulating hormone, leads to insulin resistance in the cells and we regard it as a precursor of type 2 diabetes. Furthermore, people who are insulin-resistant experience stress differently from those who are not insulin-resistant.

Why we should rethink our daily sugar consumption and what consequences this can have for our health and well-being is explained below.

In Germany, there were about 7.5 million type 2 diabetics in 2018, plus about 2 million affected persons who are still undiagnosed, according to the German Health Report Diabetes 2018. According to this report, about one in ten germans is diabetic. A large number of patients do not even know about it. What is not recorded, however, but is currently causing a sensation in the media, are the effects of sugar even in apparently healthy people.

For example, fructose is the fruit sugar that is artificially added to many foods. Fructose sounds natural, but fructose is metabolized differently by the body than other sugars and therefore often remains under the radar of nutritionists and health-focused consumers. In fact, artificially added fructose can cause non-alcoholic fatty liver disease, metabolic syndrome and reduced mental performance.1

In the early 1980s, sugar was replaced in lemonades by fructose syrup/high fructose corn syrup: cheaper, sweeter and, above all, promoted as healthier, it began its triumphal march and is now an indispensable ingredient in many products – not only sweets and candy, it is also found in hearty foods.

The problem is that fructose is only metabolized in the liver and therefore the body has only a small storage for fructose. In addition, the body reacts to fructose with a low release of insulin, which has so far been shown to be positive for health. In reality, this means that the hunger hormone Ghrelin is not suppressed.2 As a result, we do not feel full. We eat more when we consume fructose. This overeating leads to overweight, which in turn promotes insulin resistance (pre-diabetes). 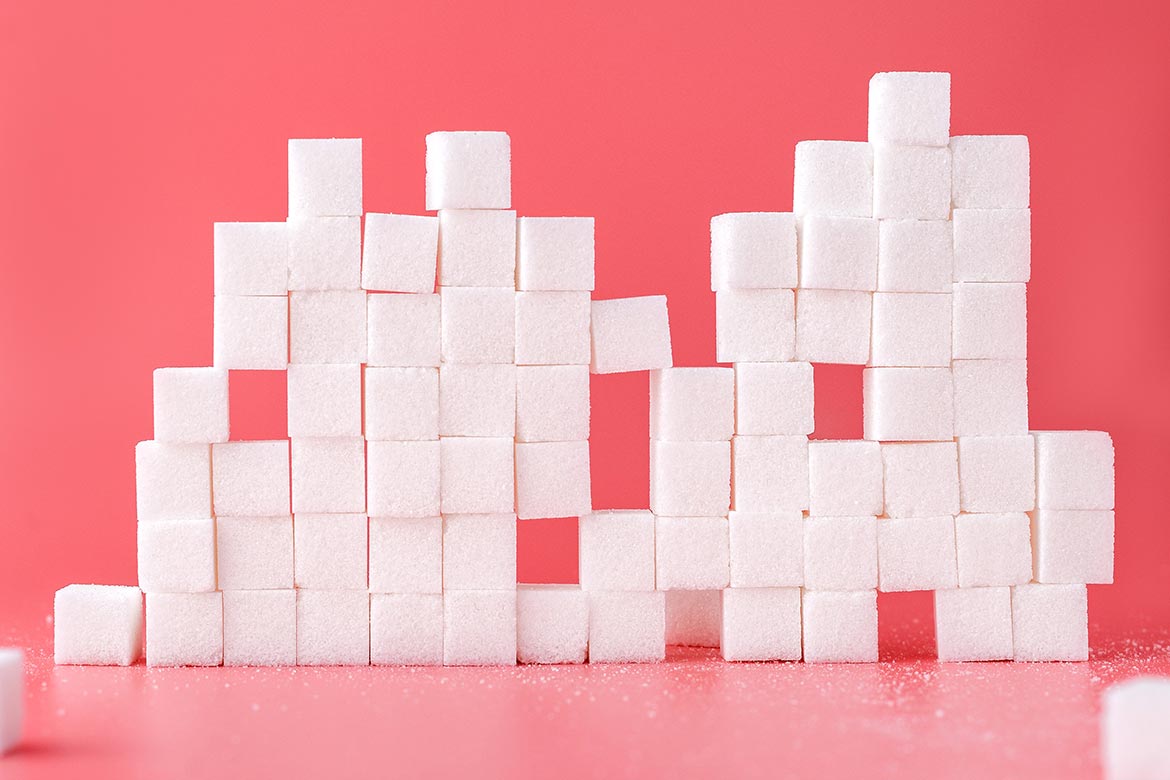 The brain reacts to sugar withdrawal in a similar way to drug withdrawal, which has been demonstrated in animal experiments.3 Over-eating, withdrawal symptoms and cravings were the result. At the same time, the effect of dopamine is reduced.4 Dopamine is associated with reward behaviour and addiction and a deficiency can cause depression. Anyone who wants to do something good for their brain should think about their sugar consumption.

On the website of Deutsche Gesellschaft für Ernährung e.V. one can find the following statement: “Sweetened drinks increase the risk for obesity and diabetes mellitus type 2” (March 2019). There are at least two reasons for this: People who consume sugar-sweetened beverages consume too much glucose. If this glucose is not broken down, the liver converts it into fat. A non-alcoholic fatty liver can lead to insulin resistance (type 2 diabetes). But sugar is not only glucose. Sucrose, or what we call „white sugar“, is half glucose and half fructose. Added sugars like sucrose that contain fructose is one of the causes that there is such a high increase in type 2 diabetes.5

High sugar consumption does not only lead to an increase in insulin. Memory also suffers from too much sugar.6 It has even been shown that high carbohydrate consumption increases the risk of dementia in older people.7

Stress leads, as Eller et al. could prove in 2006, to an increased concentration of the stress hormone cortisol. Cortisol increases insulin levels, which in turn increases insulin resistance.8 Insulin-resistant people react more strongly emotionally to negative stimuli.9 Although research on this subject has yet to be intensified, it points out that if there is an imbalance in the sugar-regulating hormone insulin, the person affected feels stressed more quickly.

How Zen can help us reduce sugar

What can and should we do with all this gruesome news from the world of science? Trigger a sugar revolution? Making politics accountable? Zen Buddhism can give a simpler but more radical answer: Concentrate on what is in front of you right now.

To stay healthy and feel good, it helps to take a look at everyday things and make us aware of where we can improve our quality of life. Nutrition is part of our everyday life and we should therefore pay special attention to it.

What you do every day has more weight than what you do once in a while. This teaches us zen. Too much sugar in our daily diet causes major health problems, as I have been able to explain in detail. Conversely, this means that a reduction in sugar has a lasting positive effect on health and those who are healthy are also better equipped against stress. In other words: You want to feel more zen? Eat less sugar.

Sugarcubes picture by Mae Mu on unsplash. Thank you <3