From Berlin to Hanoi: what travel taught me about bridges

Fabienne became one of the first members of NION Community when she lived in Berlin. She was a traveler before, but her attitude towards trips and friends around the world has changed over the years.

Travel is about crossing bridges. It is so by essence, allowing you to bridge the distance between you and other places, cultures and people. And with the Internet and today’s technology, the gaps between all these things seem to be filled more easily than ever. Even when you’ve come home, or moved places, you keep crossing the world, as modern travel connects us together constantly. At least, that’s what it feels like.

I became able to work remotely and to start my journey as a long-term traveler when I turned 25. That was four years ago. Thus began a sort of travel bulimia: I was piling up destinations, constantly restless about where to go next, eager to discover but constantly running out of time, meeting hundreds of people whom I wanted to keep seeing but never could, except occasionally on the edge of half a couch. I was having thousands of virtual conversations through social comments, making as many new Facebook friends and never being able to feel at home nonetheless. As my phone filled up with new contacts all over the world, and allowed me to jump from one continent to the other in a finger snap, I was living my best selfish life.

This is a story of how I came to understand the sense of travel goes beyond crossing bridges.

The first attempt at a home: Berlin

When I moved to Berlin in 2016, I had been traveling the world without a base for a whole year. I genuinely thought Berlin would become home, for I was moving to live with two of my best friends and you know what people say, “Home is where the heart is”, and my heart
definitely belonged to them so I thought that could be it. I had always been sensitive to the vibe of the German city anyway, although talking about a “vibe” for Berlin feels like an understatement: we should say a soul already.

I liked the green spaces in Berlin, the large avenues, the radically changing atmospheres as you cross from Neukölln to Friedrichshain, into Mitte and all the way to Tiergarten, the hidden dens that only Berliners can take you to at the heart of the night. I liked the fact that – as opposed to Paris – the distance between two U-Bahn or S-Bahn stations made you actually walk and feel your body. I liked its hot summer and how it made you want to buy fresh groceries at the Turkish market rather than the super one. I liked its very cold winter and how cosy it would feel to find shelter in small coffee shops or concept stores at the corner of what could look like an austere crossroads – and that’s how I found the very first NION community space.

Naho was sitting tapping on her tablet, at a table made of crates in the middle of what was a concept store selling vinyls, kimonos and ceramics, back then. I will never forget how this cute Japanese shop in Moritzplatz sprang up like an unexpected treasure chest in the middle of January (I have always been passionate about Japan), and at the same time, was such an unsurprising little spark in Berlin urban jungle (sparking precious new hideaways is one of the things Berlin does best). When I met NION community catalyst – she didn’t even have this title at the time – I guess I didn’t really know what I had been looking for, but it found me: a chance to believe in an ambitious project, grounded in space, tied to a city but with the dream of building a concrete bridge between two countries I loved, two cultures and two peoples. NION was all about rooting down the essence of travel. How fascinating.

From one community meeting to the other, as we worked on how to make NION grow, how to bring people together around a topic that sounded sometimes too big or too original for an ordinary life, how to allow ourselves to find a place in a still budding project that hopefully would radically change our living space, it touched me how valuable regular physical meetings were. Valuable from a project management point of view, but also valuable in feeling the strengths, emotions and driving forces between people. It makes you actually feel the potential of human communities, and the more you’re in touch with them, the stronger your basis for building projects grow. But however inspiring that was, the internal urge to keep moving struck again and I left Berlin despite a very strong feeling of unfinished business in March 2017.

At the threshold of a community: The Railway Hanoi Project 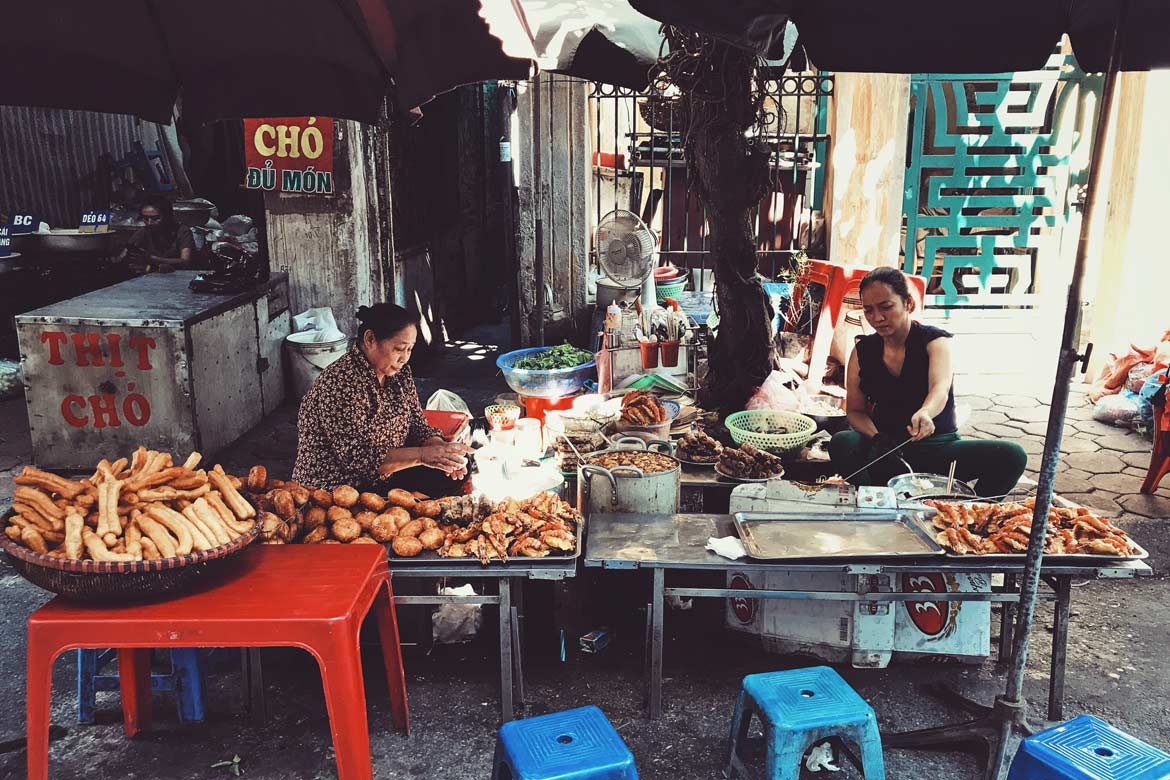 Fast-forward to 2019. Happy new year world! Almost two years have passed and I’ve settled down in Hanoi, Vietnam. It’s far from Berlin, but not that far in spirit, or in History. To say the least, it’s also a city with a very deep soul, that’s been broken and rebuilt, a city where forces encounter forces, fight, make love and thrive. What struck me and, I guess, made me stay in Vietnam was the creative energy bustling from everywhere, everybody and everything. I came to Hanoi with the plan of crossing the country in 30 days from north to south and certainly not the plan to stay. Well, I never made it south.

I’ve been living in the city for 14 months now. What have I been doing? Long story. The best way to summarize it is probably to say that I’ve been growing. 4 months into moving in Hanoi, I met a Vietnamese girl whom you could call a sparkling gem but it would take me a whole other article to talk about her – all you need to know for now is that her name is Thao Quach and she made it a mission to make this world a better place. She does this through tourism, joy and love, and embarked me onto a long-lasting project of our own. 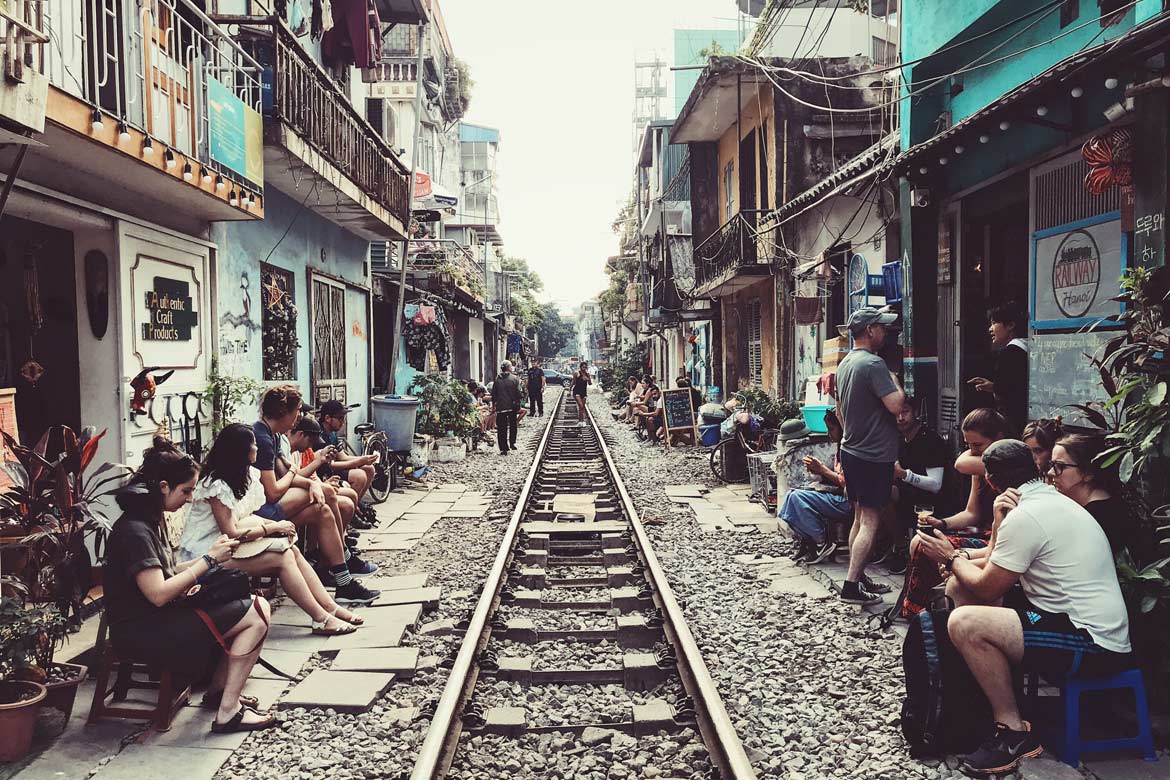 This is Hanoi train street. It’s famous for… its super instagrammability. We run a cute coffee shop with a jazzy vibe down there, very close to the train tracks. It’s small, the walls are painted green and there are flower pots hanging down the top window. If you google The Railway Hanoi, you will find us. All day long, we welcome tourists who come to see with their own eyes how close to the houses the passenger train between Sapa and Hanoi runs. We sell traditional Vietnamese coffee and craft beers hand-brewed in Hanoi. We open at 11 am and close just after the 7:30 pm train. And the rest of the time, we help the community thrive.

Along the train tracks, life is not always easy. Not only because a train runs through several times a day, and you have to move everything in swiftly, including your children – but precisely because there is no gap between the train tracks and your house, between your house and your neighbors’, between your neighbors’ houses and their neighbors’. This proximity makes the community of Hanoi train street very strong and unique. And sometimes hard to penetrate, even if with time, smiles and patience, aunties and uncles from the train street have even welcomed a total stranger like me, thanks to the bridges built by my Vietnamese family of The Railway Hanoi. So, a strong community for sure, but with uniqueness can come difficulties to integrate the rest of the Hanoian city hustle and bustle.

So Thao Quach created The Railway Hanoi Project. It has a community mission: our neighbors have given us a place in their lives and space. The tracks bind us together. It is our duty to give back to them and we do so by opening up the street to the world in the most responsible way possible – at least, we try hard to do so. We recruit volunteers to give free English lessons to the kids, the young staff wakes up in the morning to chat, drink tea and give massages to the elders of the train street. Occasionally teach them a few English words. We help neighbors to write signs in English and launch small businesses so they can benefit from tourism directly. We call for artists to come and paint the walls of our train street, making it more attractive to foreigners and locals alike.

From crossing to building bridges: a lesson from the heart

My main task in this project (besides creating nice communication things such as leaflets, articles and Instagram posts) is to organize street food tours for French and English-speaking tourists. I guide them along the tracks and introduce them to the richness of Vietnamese food and culinary culture. Part of the benefits we make from the tours goes back directly to the train street community. But is money the most important part here? I don’t know, you tell me.

It seems to me that the most valuable takeout comes from the experiences we live when building bridges to be crossed by tourists and locals, French-speaking families and Vietnamese youngsters, foreign and local kids, also helping by the way a French travel blogger to play an active part in her adoptive community. 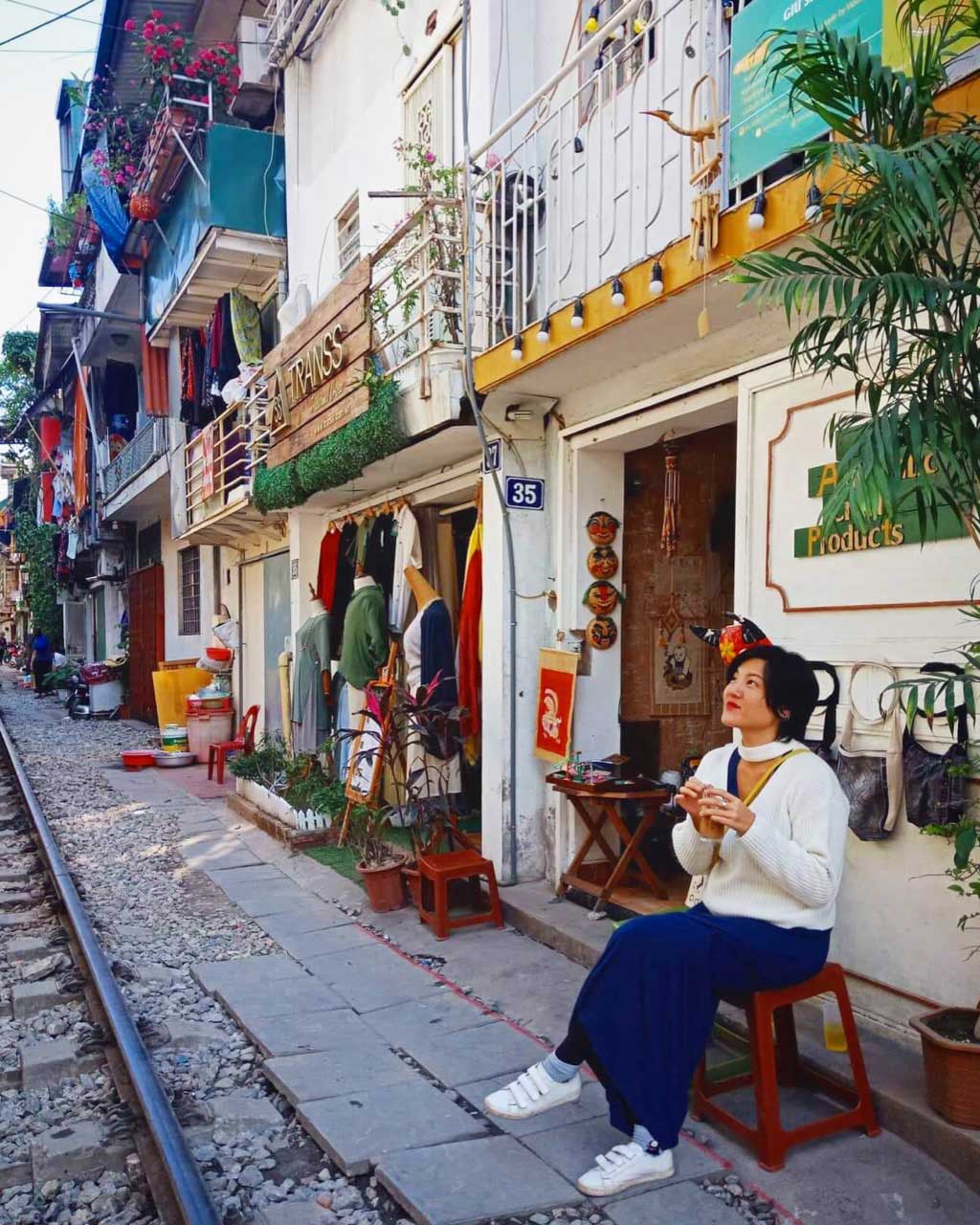 So, the traveler I am has grown from Berlin to Hanoi: of course I still travel a lot, but the restlessness has faded away and lessons have been learnt. Don’t get me wrong: all the stories heard, meaningful experiences lived and paths crossed, however brief they’ve been, have nourished, enriched and changed me. They have paved the way for finding a proper place in a tangible community. I used to think that the excitement of travel came from going places and meeting new people all the time. I’ve realized that for me, inspired by the people I’ve met along the way who put their energy into building and reinforcing communities, the excitement comes now from the belief I can be playing an actual part in this world, making my own world a better place.