Experience nature in the city

At last week’s ideation workshop “We, City, Nature.”, NION community members developed several tangible interventions and actions to draw attention to the fact that there could be more nature in Berlin.

The aim of the workshop was to, as a community, collectively come up with tangible, reachable goals that we could then turn into actualized events/projects. By splitting into three groups of two people we had open discussions of moments in life, where we felt that nature was present in a good way. We also spoke of the places in which we felt Berlin could improve in its relationship to nature. Following this, through facilitated brainstorming, which was limited to two separate rounds for 2-3 minutes each, everone was given a marker and a pad of sticky notes and asked to write down, while keeping in mind previous discussions, initiatives (whether far fetched or seemingly simple) and just write it all down. After both rounds of brainstorming we collected the responses and stuck them on the board. We then grouped them based on similarities and tried to decide which ideas we wanted to pursue further in that moment. Finally, in two groups we came up with 3 plans for future NION programs that will hopefully come to fruition in the coming months.

Nature as an escape from the city

The weather was warm and the sun was out this day, which felt fitting for a discussion about the connections, or lack thereof, between nature and Berlin. The three groups of two were prompted with two questions

Q1. What’s your relationship to nature?
Q2. What do you wish to see more in Berlin in terms of Nature? 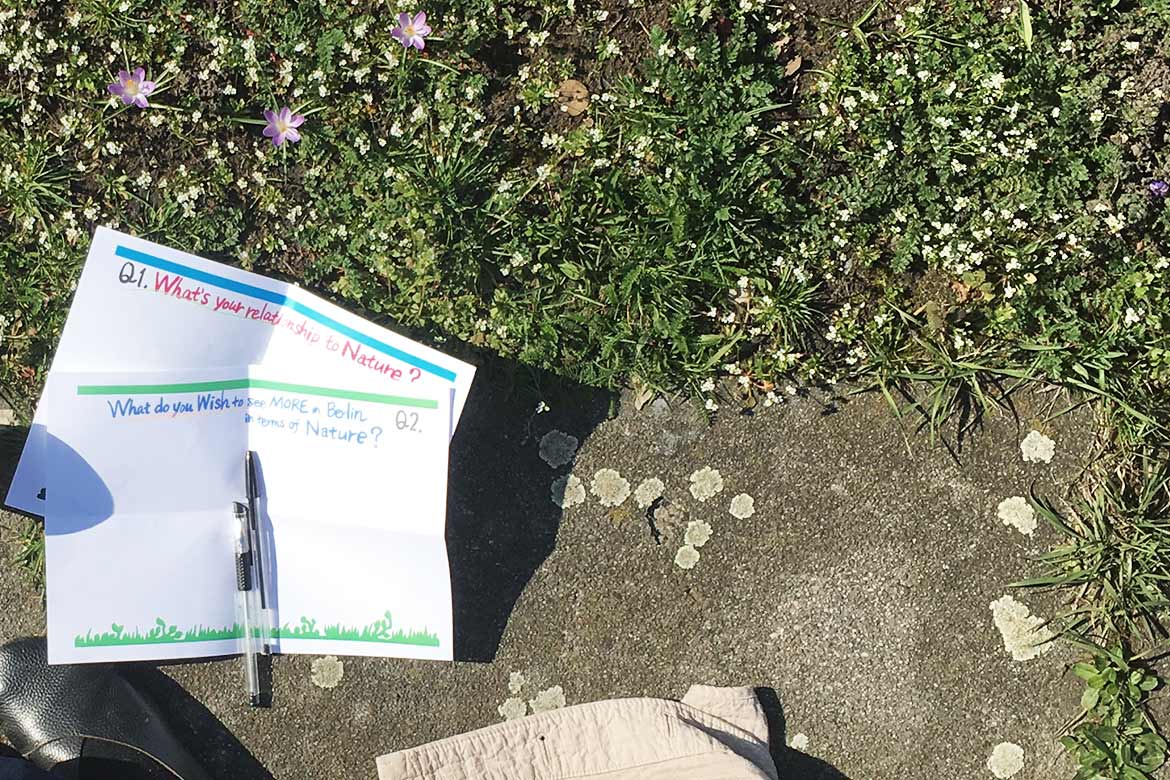 In my duo, I brought up my love of the birds in the city – I have been seeing many black crows with beautiful blow and white patches – as well as my desire for large windows as I am a person who craves natural sunlight as much as possible. When addressing the question of places in Berlin that I would like to see more of nature, I found myself struggling a bit more. For me, growing up in another big city, I have always considered nature as an escape. There are many things that I love about living in the city, but sometimes it is nice to get out a spend time in the clean air and the clear skies – I’ve always enjoyed looking at the stars. Waking up in the morning and hearing the birds chirping in the spring and seeing the beams of sunlight shine through the window is exactly what I’m looking for from my city. When I want to get away from some of the noise and some of the “hussle ‘n’ bussle” this is when I like to spend sometime sunbathing on the beach or hiking in the mountains/woods.

Sure, there are things that can be found in nature that one might struggle to find in most cities, but the same thing goes the other way around. Somethings that came up from others included a desire for more access to seasonal fruits and vegetables. And more natural scents and sounds throughout the city. Also, the thought to mark occasions of change throughout the different seasons, like for example Summer Solstice.

From brainstorming to tangible ideas

With the many thoughts that arose after our group discussions, we then began the timed brainstorming. After the time concluded we had many different ideas ranging from “Scent bombs” sprinkled throughout the city, creating access to seasonal foods, and having sounds of nature playing in public transportation stations. In two groups, we then decided on which ideas we wanted to focus on. And through these two group discussions came up with four concrete plans.

The “Scent Bombs” would be pockets of natural scents that could be placed in public areas to better the environment through the sense of smell. The “NION Characters” will be designed images of things found in nature that could be placed throughout the city, like much of the street art we already see in Berlin. The third, the plan to have NION community members carry portable speakers that play sounds of nature and can be heard anywhere… the tram, the bus, the street, you name it! And the final one is a celebratory event for Summer Solstice that would take place both in the morning and evening of June, 21st to mark the sunrising and the sunsetting of the longest day of the year. This event is also planned to incorporate aspects and philosophies found in traditional Japanese Tea Ceremonies.

Overall, the day proved to be rather productive. But, additionally, it was a nice experience, even for someone who won’t actually be in Berlin to see these ideas take form, because it gave me the chance to still be a part of the discussions that will influence the development of the community. I am excited to check back in later in the year, when I’m back in the states, to see how wonderfully these initiatives are received.