When history meets nature:
a conversation between memories and cherry blossoms

There are places in Berlin where once greyness, a sense of emptiness and general malevolence soaked the air. Nature and human architecture sort of embraced it all. In those urban portions of land, the Berlin Wall stood – with its imperturbable presence. Nowadays, in different spots throughout the city, cherry trees from Japan took over, delighting senses of the passers-by, offering a calm feeling of reconciliation.

The symptoms of a perfect day to come reached my eyes as a warm sunlight entered the bedroom. A crystal-clear blue sky was another hint that served as a background outside the window. After getting ready and exchanging the last updates with Maike, I got on my bike and rode through Berlin to reach her somewhere we both didn’t happen to visit before.

April in Berlin may be unpredictable and seesawing when it comes to the weather; yet, it also brings wonderful shades of pink that are visible for a relative short timespan on special trees: cherry blossoms, charged with a meaningful touch of history – and authentic generosity.

The meaning behind some cherry trees in Berlin 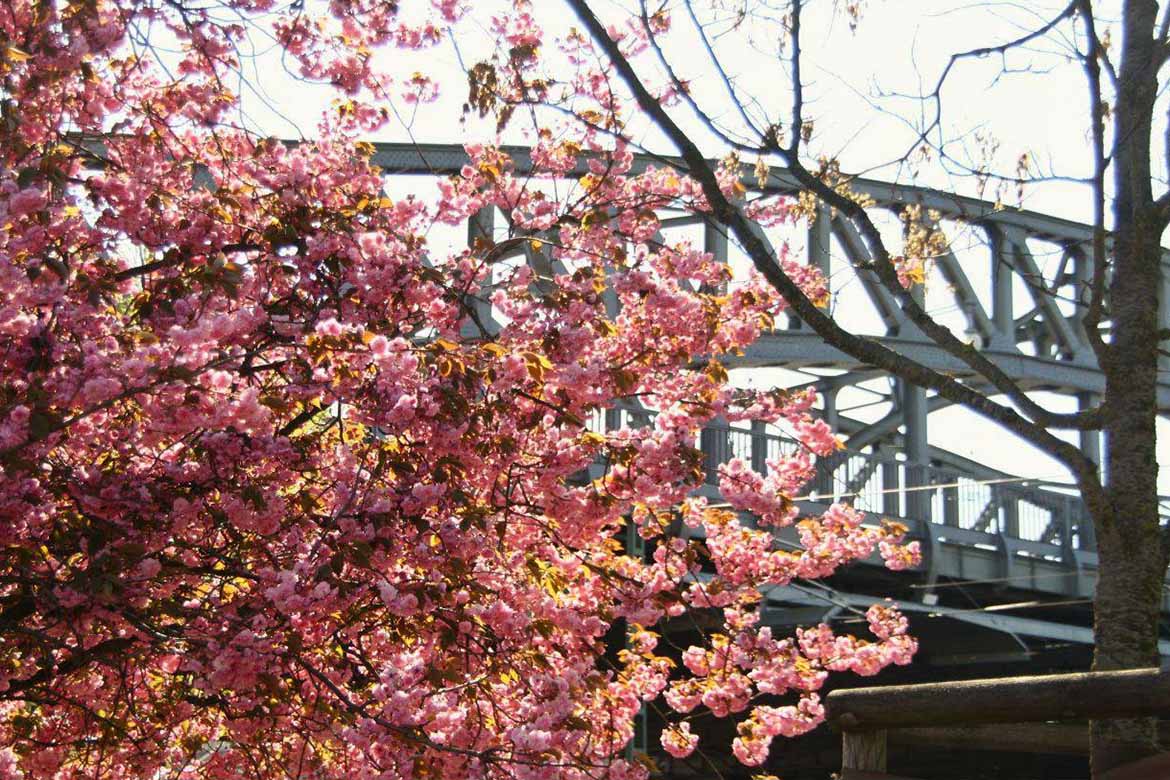 One year after the fall of the Berlin Wall in 1989, TV Asahi, a Japanese broadcaster, had the idea to ask their viewers whether they would take part in fundraising for the wounded Berlin, finally reunited as the whole Germany. The goal was to collect enough money to help donate and plant cherry blossoms along the way where the Berlin Wall and its death strips used to divide hearts and souls.

Those trees would regenerate year by year, bearing a constant and powerful reminder of peace and reconciliation.

If you happen to enjoy Spring in Berlin, then try to do it to the fullest strolling by the cherry blossoms spread out around the so-called Berliner Mauerweg, “the Berlin Wall Trail” – a hiking and bike route project that runs all along the strips of land dividing the West and the East patrolled by the GDR (former East Germany). Maike and I agreed to meet in one of the main spots along the Mauerweg where some of those trees form a lovely route – at Bornholmer Straße S-Bahnhof, where the memorial place Platz des 9. November is also located.

A stroll among shades of pink and memories

It was right after 2pm, the sun was shining bright and it was quite warm. People were commuting at the train station, where a tram line runs too – a typical sign of the former East Berlin urban layout. Maike got off the tram and I reached her, greeting and chatting while walking towards Platz des 9. November 1989 at the opposite side of the bridge. 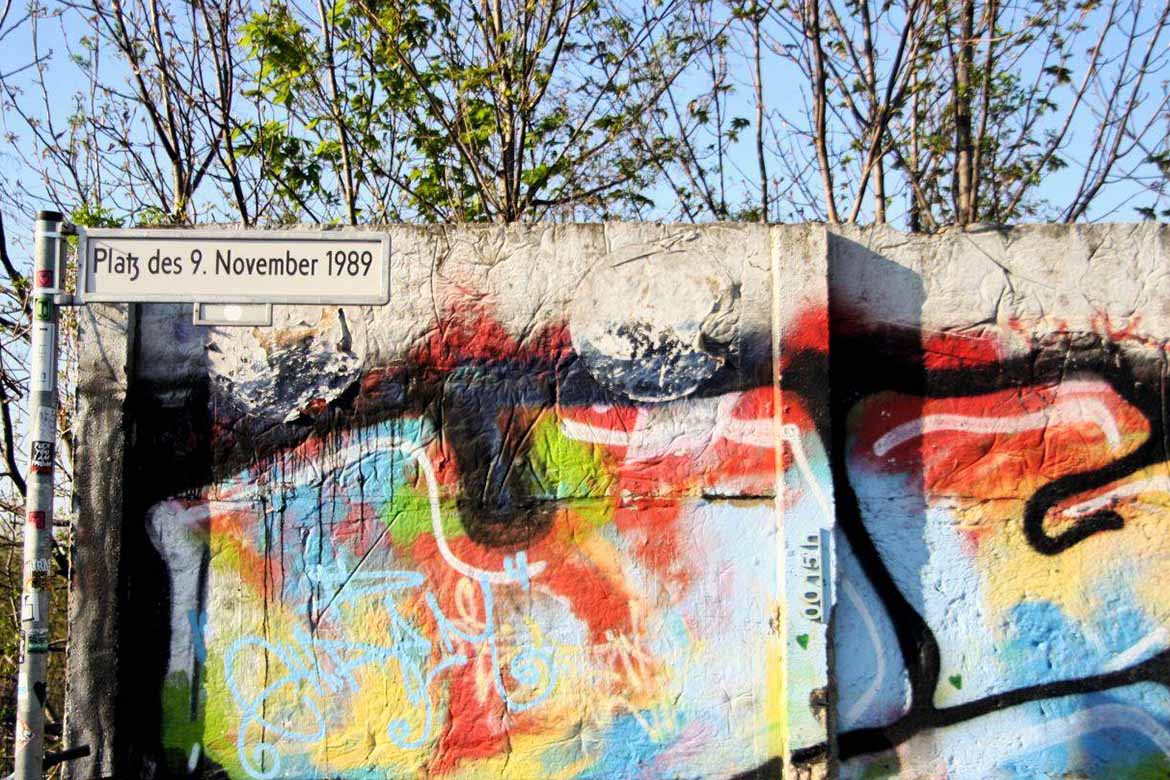 Ruins of the Wall have been standing there since 1989. Adjacent information panels and plaques are scattered as people can read moments of history that have crossed the area around Bornholmer Straße, where one of the GDR checkpoints used to stand – actually the first checkpoint that allowed East Germans to travel freely to the West once it was clear that the Wall had lost its status as a border.

In 1989, the night of November 9 – a day that also bears other significant events in the German history – people belonging to two different countries in the very same city could finally breathe the common air of freedom. 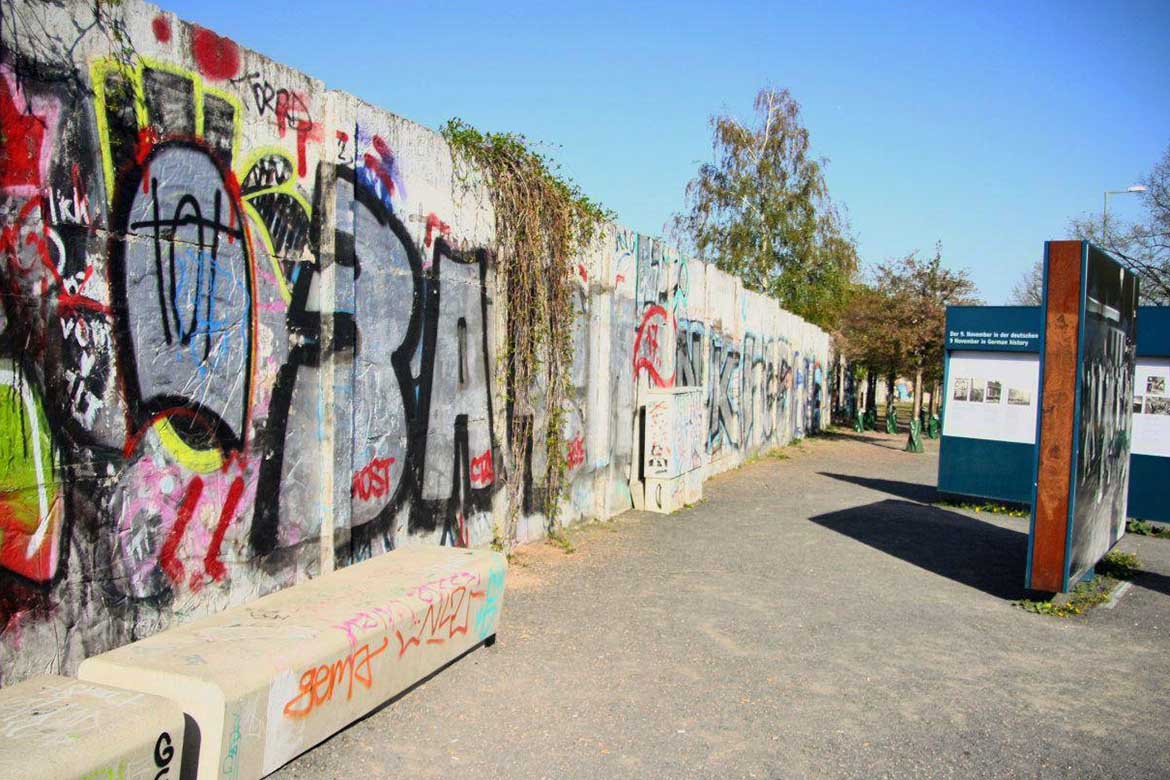 “We have always been told that people in East Germany lived in oppression and that their quality of life was miserable”, Maike explained as we were standing among beautiful cherry blossoms.
“Coming from the south of West Germany, I once took part in a school trip to GDR. In 1986 we were invited to meet our peers from the East and see how things actually were”. Maike brings me to a short period during her high school years when she had the chance to visit East Germany. “As Westerns, we had that sort of mindset that we had to save them”. 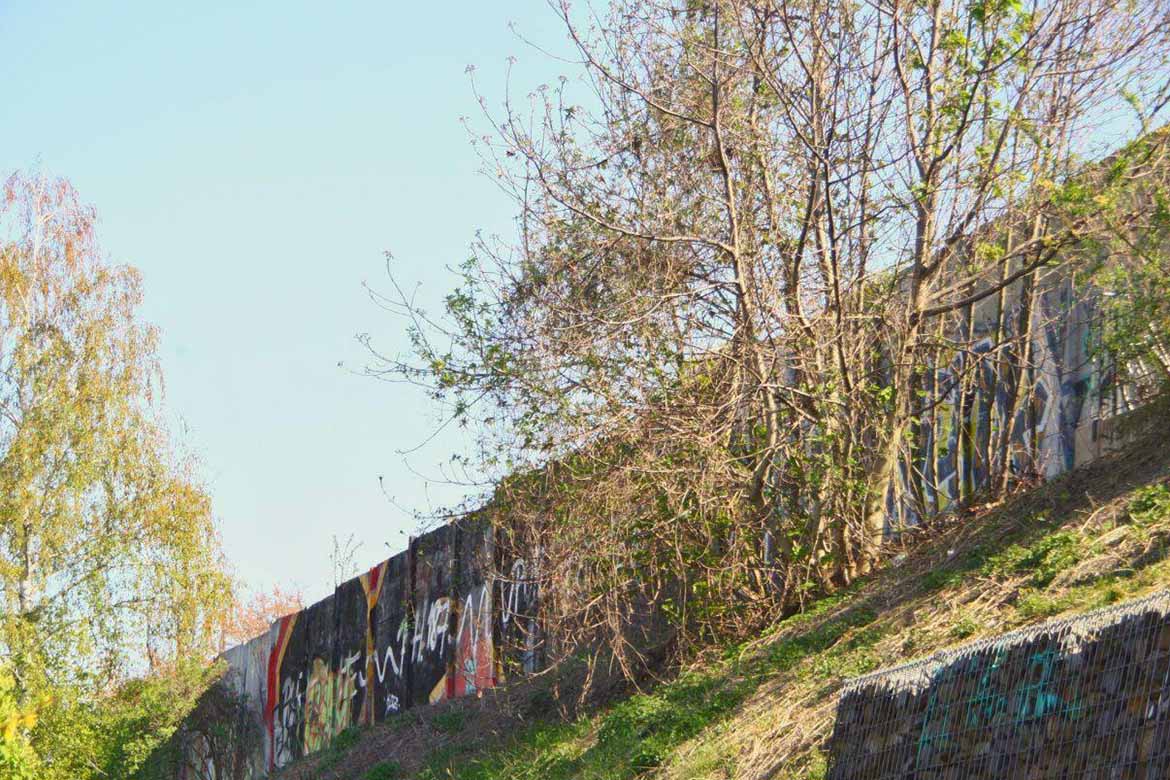 “GDR had no problem to show its system and country to us, Germans from the West”. I’m drawn to her memories, as she continues: “Our government portrayed East Germany in a way that perhaps was not as it really seemed to be. Of course many things weren’t good, but their society was structured in a different way – and for some aspects it was more equal and emancipated, while West Germany stuck to its traditional and conservative system”.

The small area of green grass and pink-shaded trees was crowded – not as any other touristic points of the city, though. People passed us by as Maike keeps on describing her experience in the East: “During that trip we could talk to our Eastern peers, ask them questions and interact with them. At the same time we could also notice the notorious state control – GDR officials had a constant eye for us. We heard of stories of students who tried to escape the East while being attached to the underlying side of school buses – we were not so surprised to see how strictly the officials were checking ours”.

Maike’s connection to GDR goes beyond her school trip in 1986. In fact, when she moved to Berlin in the 2000’s, she started working as a Community Editor for a leftist newspaper. There, readers were invited to take part to online debates and discussions and she learned a lot about their personal take on life in the GDR and the appropriation by the West after the Wall had fallen. “I am very ashamed how ignorant we have been back then” she explains.

About rabbits and embassies 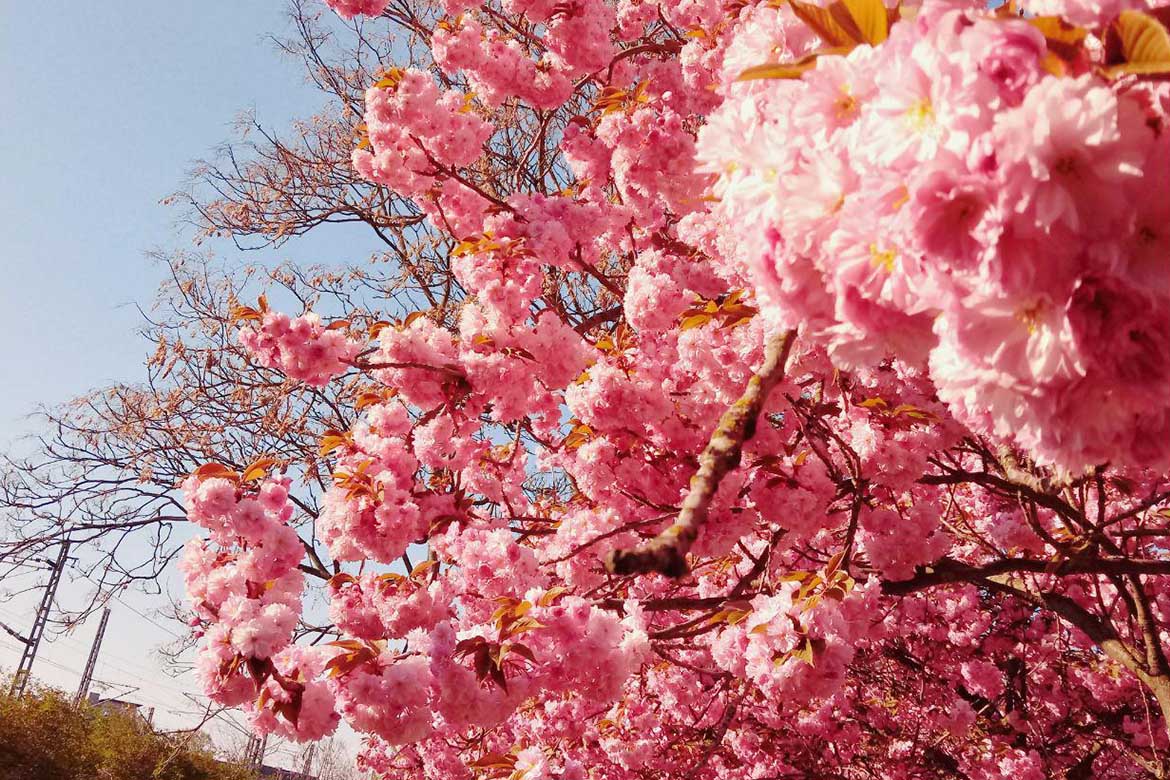 “Did you know that rabbits used to live on the death strip?”. This question amazes and intrigues me – rabbits? How come? “There is a well done documentary that tells the story of those rabbits. When the wall was built, they were trapped in between and soon considered the space as their original environment, without any enemies. The small animals became a symbol of courage as many of them were able to dig holes and do what most of the Eastern Germans couldn’t: cross the border!”. That is really a peculiar fact as I have never heard anything like that before. 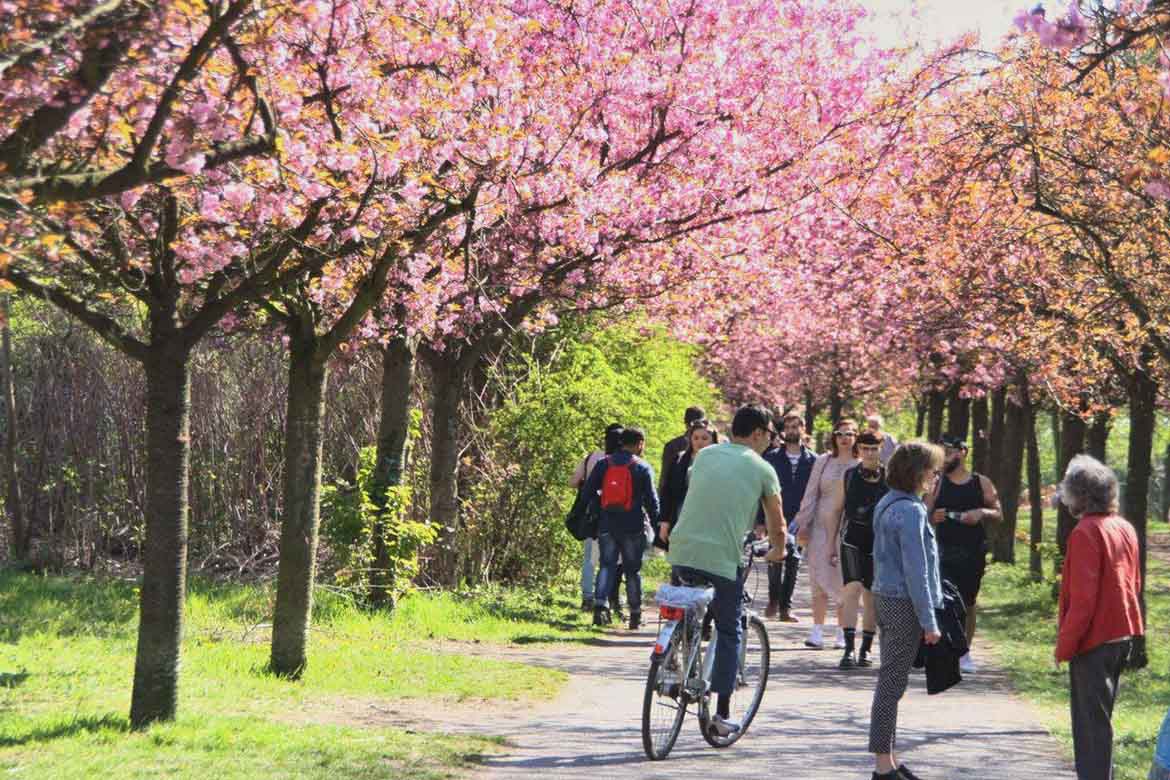 While those brave rabbits were metaphorically jumping and digging holes in our conversation, Maike and I kept on strolling among coloured trees and cheerful people. Our walk led us in other parts of the area around Bornholmer Straße, and when we approached again Platz des 9. November 1989 before saying goodbye, Maike shared another of her memories: “The fall of the Wall was not something that anybody would ever expect. However signs of impatience from Eastern Germans got more evident. I recall that one evening in September ’89 my dad came into my room, screaming about a piece of news he just saw on TV: about 4000 GDR citizens who had camped on the ground of the West Germany embassy in Budapest in order to being allowed to emigrate were allowed to do so. Their persistence got finally rewarded!”.

Cherry blossoms may have brought Berlin and Japan closer together, so far away from each other in terms of kilometers; yet, those trees will always symbolize the spirit of union and togetherness in the heart of a city that once was divided, split into two different worlds in the very same land.