What about cultural appropriation when it comes to Torii?

As a garden designer specialized in Japanese gardens, Anika is often confronted with gardens outside of Japan featuring elements seen as typically Japanese, including the Torii gate. To find out if that was okay, she explored the origin of the Torii and its use in Japan and other countries.

As a Kimono-lover, I followed the media hype arising around one single Kimono, the uchikake painted by Monet, in 2015 during an exhibition initiated by NHK and the Museum of Fine Arts in Boston, USA. During a weekly event it was possible for American patrons to try on a replica of the Kimono and take pictures with it.

What is cultural appropriation?

What happened left me speechless: a small group of Asian-Americans assumed this “cultural appropriation” even though this service was carried out by a Japanese initiator. Although a counter-group of Japanese-Americans and Japanese residents in the USA defended the exhibition, the service to try on the Kimono was stopped by the Museum.

But this didn’t mean that the discussion around Kimono worn by non-Japanese stopped. For quite a while foreigners were randomly attacked on social media by people from all over the world who echoed this first activists group when pictures of non-Asian in Kimono were posted.

Cultural Appropriation is defined by the Cambridge Dictionary as followed:

“The act of taking or using things from a culture that is not your own, especially without showing that you understand or respect this culture.”

Most of the people attacked truly appreciate the Kimono. Hence, if the culture, where things were taken from is supporting this, is it still cultural appropriation?

But what then came to my mind in connection to cultural appropriation wasn’t the Kimono, also not the cosplay of Samurai, it was the Torii, the red gates in front of Shinto shrines.

As a garden designer specialized in Japanese gardens, I am often confronted with gardens outside of Japan featuring elements seen as typically Japanese, including the Torii gate.

Today I would like to explore the origins of the Torii and their use in Japan and other countries and investigate if using them in a garden might be cultural appropriation. At the end I want to find a way to please everyone – Japanese people as well as non-Japanese. 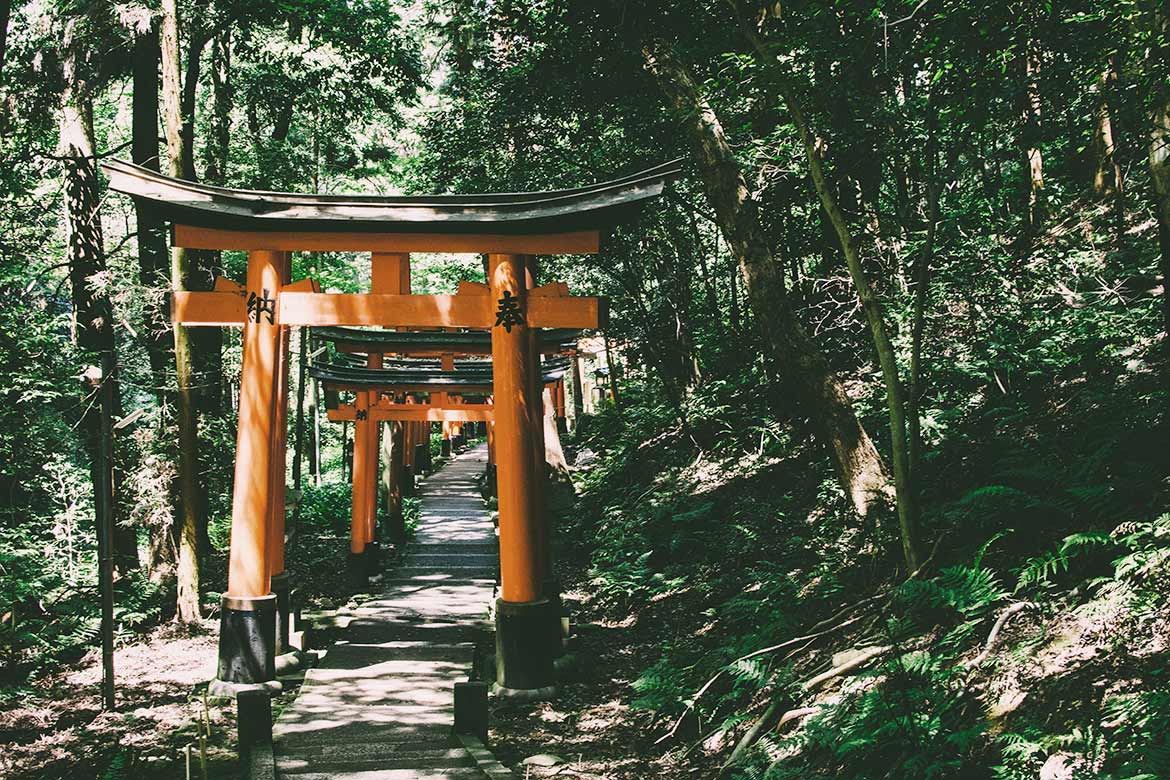 The history of Torii

The oldest Torii in Japan, verified in a written record, dates back to 992. It is not known whether the gates were invented in Japan or derived from torana (India), hongsalmun (Korea), or pailou (China).
However, in Shinto, the religion using Torii gates as a marker to their sacred spaces, posts with ropes and white paper in between were already used before the first Torii appeared. These simple posts could have been the predecessor of the simplest Torii.

The etymology of Torii

There are two main theories behind the origin of the term Torii. Taking the Kanji 鳥居 literally, the meaning would be “birds are here”. This isn’t far fetched as roosters were kept to guard of all evil. It is likely that the Torii was a marker for the presence of a rooster or that the bird used to sit on it.
Another possible meaning derives from the sound alone, not the Kanji, toori iru, which can be translated as “pass through and enter”.

The use of Torii in Japan

Torii are gates of various shapes and colors marking the entrance to a Shinto shrine. Shinto is one of the two main religions in Japan. Who enters through a Torii gate will cross the border between the mundane world and the sacred world of the Shinto deities.

While in present days everyone is free to enter a Shrine, it wasn’t long ago that this was not the case proved by a quote from “Shinto Symbols: Contemporary Religions in Japan, Vol. 7, No.1 (1966)”

The Torii is a kind of taboo (in ancient times it was prohibited to enter the area behind – ed. Note). It is improper to go under the Torii with any impurity, spiritual or physical, and there must be no stains, sores or cuts, and no disease.[…] The less devout and outsiders in general pass beneath the Torii with little or no idea of what its meaning may be.

The structure of a shrine 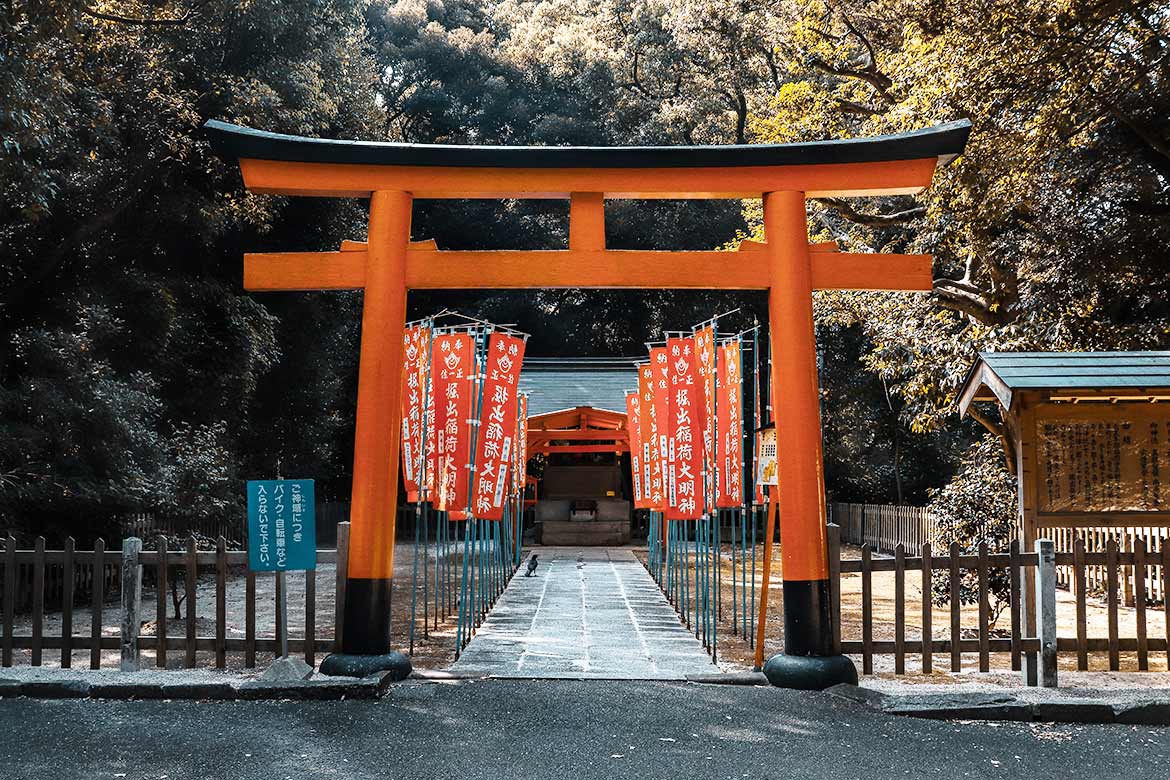 The Torii gate marks the entrance to the shrine. Usually some steps leading up to the approach to the main buildings behind it. A place to clean the hands and mouth with water is provided on the left side of the pathway. Several different buildings like the shrine office, a stable for horses or a stage can follow. At the end of the path lies the haiden, a prayer-hall, and behind it the honden where the deity is enshrined.

The Torii – a symbol for Japan

However, one of the first Torii appearing outside of Japan, inviting foreigners to pass through, appeared 1894 during the California Midwinter Exposition in America. This was the beginning of the Torii as a symbol of Japan.

While the constructors of similar exhibitions and garden designers knew about the meaning of the Torii and always included a small shrine building behind, the ordinary people missed the link between both and soon separated them to use the Torii alone as a symbol for Japan. They included it into their private gardens together with stone lanterns, pagodas or Buddhas.

[..and the Toriigate became a symbol of Japan, not Shinto, in the United States.]
from S. Goto & T. Naka – Japanese Gardens Symbolism and Design

Since then decades passed and the Torii was used all over the world to emphasize gardens and other structures as Japanese and the deep connection it has to Japan’s unique religion got completely lost.

Seeing the Torii as an inevitable part of the Japanese Shinto religion, it seems like cultural appropriation when it is used out of its context as a mere garden element.

The act of [..] using things from a culture that is not your own, especially without showing that you understand [..] this culture.

Using the Torii without a shrine building is fulfilling the definition of the Cambridge Dictionary.

However, it is not that easy. Taking Shinto itself into consideration, it is said that a deity is living in everything, in animated and inanimate things alike.This is one argument for Torii being used in a garden, often marking the entrance to it, because a deity will always live behind it within the garden, which makes it a sacred space.

Other people argue that if the owner of the garden believes that something important lies behind the Torii, it is totally fine to place it there. The last group feels uncomfortable with a Torii used in gardens and not in combination with a shrine. 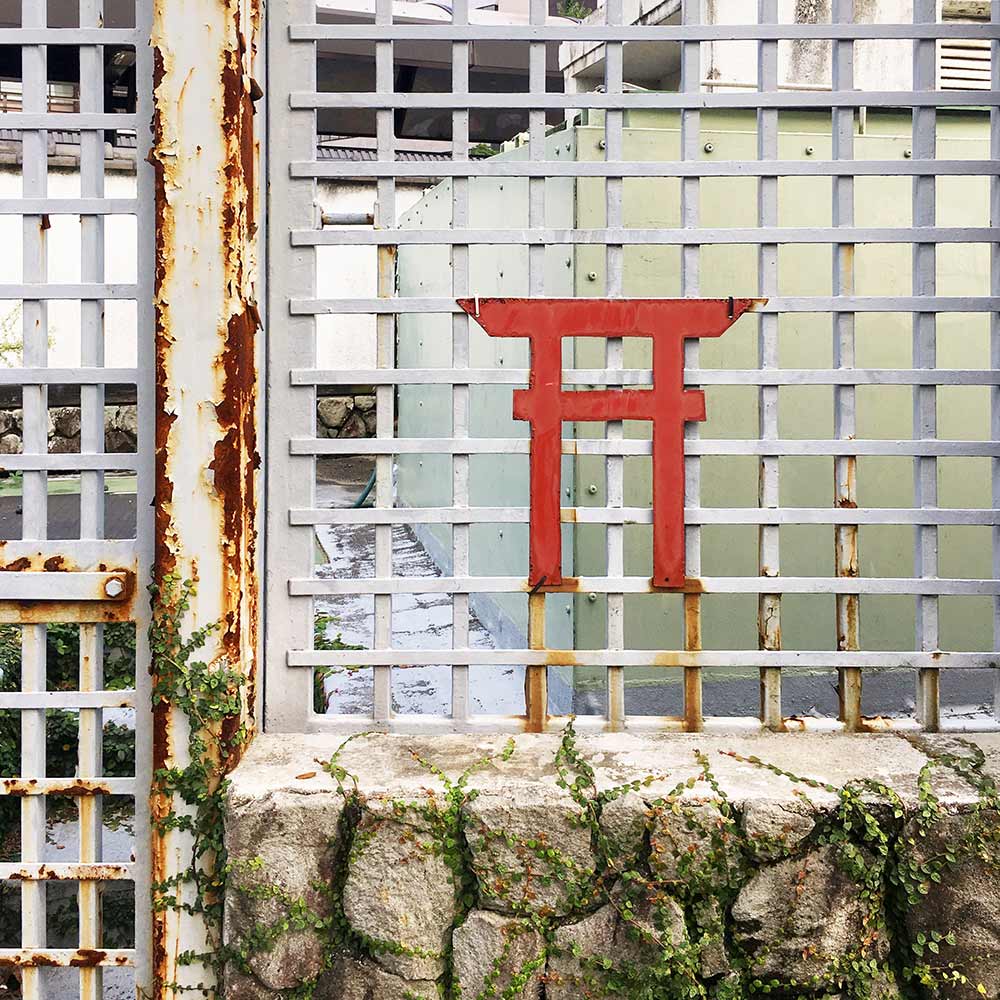 But aren’t the Japanese inconsistent themselves using the Torii in places to avoid strangers and dogs peeing there for example? Indeed is the option about this small charms ambivalent. Some Japanese see them as a totally appropriate way to guard their property, others find it inappropriate to use them like this.

What I believe is that we need to separate the Torii which is the gate to a Shinto shrine from the Torii which became a symbol for Japan, just like the cross in Christianity. However, foreigners using Torii in their garden should also understand the meaning Torii have in Japan and be aware that they are using an element which is, in its original context, a religious object.

With a mutual understanding between both parties, problems shouldn’t arise.

Header picture by Maicol Santos, Torii in front of shrine by DEAR, Torii in the woods by Jan Gottweiss, all on unsplash. Thank you <3