The desire to create should not be stopped!

When it comes to Japanese music of all kinds, Taishi Nagasaka is very well known in Berlin’s scene as DJ ONONiiONIONIION. In this part of his series about music, food and life you learn about Japanese anime heroes.

So here I am again, I hope you enjoyed my last article and some of you came to the Izakaya event. It was pretty fun! I like the atmosphere there because age, type, or style of people don’t matter. You can talk or dance with your mates but there is no pressure either! Just enjoy yourself. If you’ve missed it or if you want to come again, here is the next date already: 17th May at the same location, Oblomov, this time with 60’s J-pop.

Introducing my Psych J Pop Band “Jaguar No Me” to Berlin

In the meantime, I also I got to know Japanese photo/videographer Masahiro Saito. He came to see my drummer’s house and afterwards he shot my band’s show at Arkaoda. I was just surprised about Masahiro’s sense for framing and his ability to capture the moment and I think the result is genius!

I was wondering what to do regarding my band’s 1st Music Video, but then I just called Masahiro and another friend, Jakob Gross, who is also a cameraman. He is very sincere, accountable and has amazing skills. I am pretty happy about the result. The next show will be on 9th May at 8mm, save the date!

And there is even more! Maybe I am doing too much – but on the other hand, why not? The desire to create should not be stopped! I want to invite you to an experimental evening at Klunkerkranich! I guess most of you have heard of the place, it is on the rooftop of Neukölln Arcaden and has the best view of Berlin! I don’t want to write too much about it, so just trust me and come on over! I have a monthly night of International Pop music, and the next one will be a SPECIAL JAPANESE evening with Japanese Pop, Psychedelia and even Butoh dance! Luckily I know many people here in Berlin and have the chance to bring them together!

Nowadays, I don’t perform experimental music that much, but I used to for more than 10 years! At Klunkerkranich you can experience my impro performance project Iwazu Mo Gana. Berlin based Japanese djembe player aka my bad brother, Kiyoshi Fujikawa (Tau, ex-Mystical Communication Service) and I founded the band 6 years ago. I will play analog synth percussion trigger, do sound manipulation and sing.

The idea is to create some kind of new combination between (non western) traditional and (western) experimental music, which don’t get along that much for some reasons. But it is possible in Berlin! Currently, we perform with Japanese qanun player Shingo Ali Mastuda, who broke into the Arabic and Turkish music world on his own, and with Berlin based Butoh dancer, Yoshihiro Shimomura, who is also an ex-Shibusa Shirazu dancer. He doesn’t perform that much anymore for some reasons, but he is also one of the hidden diamonds. Therefore, I’m pretty happy to involve him!

In addition to that, there will be Berlin based performer and singer Chika Takahashi from The House of Red Doors behind the desks, and Japanese psychedelic musician Kazuo Tsubouchi from Sundays and Cybele (actually I play the bass for them nowadays), released from Kikagaku Moyo’s label, Guruguru Brain. And of course me, DJ ONONiiONIONIION.

All night all sorts of Japanese music! It will be super interesting! Don’t miss the rare chance. 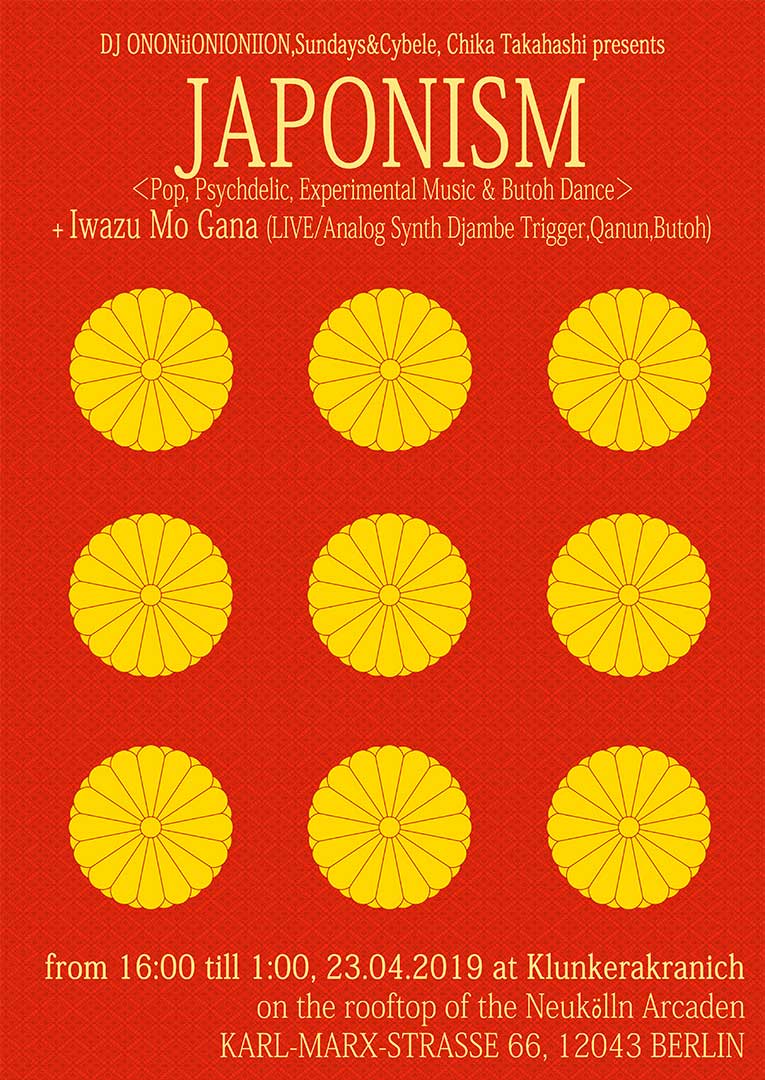 My interest in superhero and anime music

This time, I would love to show you an amazing track I bumped into recently. I am super curious about 70-80’s Japanese anime music in general, and found this track on one of my new anime/superhero compilation vinyls. It is part of ああ、電子戦隊デンジマン/Ah, Denshisentai Denjiman, a series shown between 1980 and 81. Japanese superhero series have started with 秘密戦隊ゴレンジャー/Himitsu Sentai Gorenger in 1975, and this Denjiman was the 4th series of these.

When I was a child, i was watching the ones from late 80s and early 90s, and now I feel so nostalgic! I don’t remember any content except that there were always the 5 different colour heros who beat the bad one, then the bad one became bigger and the heroes turned into super machines! It was always same, but I was just crazy about them. It’s the same now with my son.

Recently, I showed him these super hero staffs from the late 60’s and 70’s, including Ultraman, Masked Rider etc., the older ones from my father’s generation. It is great that we can now watch them together, and maybe because of the lack of technology, and because they are different to what I have seen as a child, they are much more interesting to me.

Music, set design, words, design of the monsters, cheap computer graphic etc. You should check out some of them online. Although you don’t find everything, there is still a lot to discover!

Anyway, see you at the events?

Header picture by Emran Kassim on flickr by CC BY 2.0 license. Thank you <3