Some kind of sake ambassador

Recently, I got invited by Bastian from Gō 合 Sake to a remarkable food pairing event in Berlin. I learned a lot about sake, had a chat with a famous brewer from Japan and someone even sang just for me.

Sake is still underrated and not well known in Germany. Many people assume that it is some kind of hard liquor that is best served hot. It is even more confusing that sake 酒 means just alcohol in Japan, whereas nihonshu 日本酒 (lit. transl.: Japanese alcohol) is the correct Japanese expression for what we know as Sake.

Made by fermenting polished rice, sake is usually referred to as rice wine, which is also misleading since the production process is more akin to that of beer. But it does look and taste a lot like wine.

As with other alcoholic beverages, there are also large differences in the quality of sake, leading to various categories. They are mainly based on semaibuai 精米歩合, the ratio that indicates how much of the rice bran has been removed during the polishing process. The more the better.
But beware: the semaibuai percentage number tells you how much of the rice grain is left after polishing! To get an idea: white rice that we usually eat has a ratio of 90% – not very intensively processed.

The rice type also influences the quality of the sake, but above all it is important how few distilled alcohol is added during the brewing process. Usually, premium sake is only made of rice and water with the help of koji and yeast and is called junmai then. If nevertheless a very small amount of alcohol has been added to a premium sake, then only to create a certain taste.

Designed in Berlin, made in Japan

In order to raise the profile of sake in Germany and to make it available outside of Japanese restaurants as well, Bastian founded Gō 合 Sake in 2017. Together with the masters of Arimitsu, a brewery located in Kochi prefecture, famous for its pure and soft water, he created his first product, a premium sake, still affordable and ready to become mainstream: “Gō 合 Sake Junmai” with a 60% semaibuai ratio.

Bastian brings a breath of fresh air into the German street food and gastronomy scene, never resting, always on his mission to convince people of Gō 合 Sake and sake in general.

That’s why he has recently added “Gō 合 Sake Junmai Ginjo” (50% semaibuai ratio) to his program, of course also produced without further additives. It is now available in his shop, sold in 300ml and 720ml bottles.

To celebrate and introduce the new family member to his friends and supporters, Bastian invited us to a very special sake and food pairing event at Blogfabrik.

Chef de Cuisine Yurim Byun from Eat Me Berlin created wonderful delicacies that were accompanied by several sake from Arimitsu Brewery and Tosa Brewery, both located in Kochi prefecture. As a newbie I drank sparkling sake – with the funny name “John” – for the first time, and was quite surprised by the tasty Yuzu Sake that was served with the dessert. Imagine combining regular wine with some kind of lemon flavour! 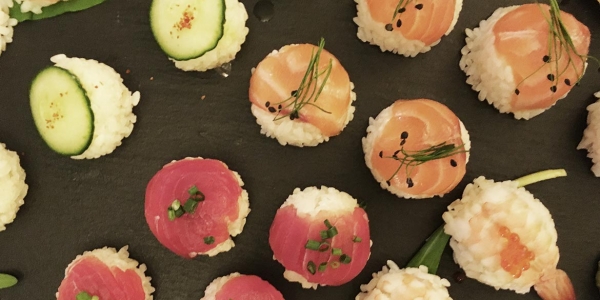 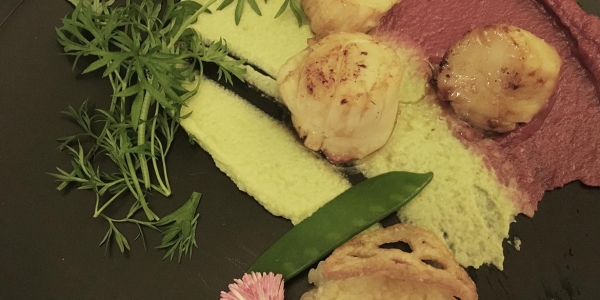 All evening long, I’ve been surrounded by many different people with various interesting backgrounds. One of the guys was not only a food blogger but a professional opera singer! When I told him that I played the snare drum on the theatre stage of my hometown during an opera a long time ago, he immediately started singing this very part of “La Bohème”. That was my biggest surprise of the evening and I was pretty touched.

Beyond that, I felt very honored that Tosa’s CEO Muneki Matsumoto was sitting right next to me when he was not busy offering sake to the guests. He told me that the company was founded in 1878 and has been run by his family for six generations. When I asked him if everyone in his family was brewing sake, he smiled and said: “No, but they drink some.”

I finished the lovely evening by making a secret wish, as every table setting included a little Daruma. These figurines come with empty eyes, the recipient fills in one of them upon making a wish. The other eye stays blank until the miracle is fulfilled. So, bring it on!