A perspective on Japan that goes beyond the clichés

Europeans often have a very corny idea of what Japan is like thanks to the narratives of travel agencies and travelers. But beauty also lies in the details of everyday life, for example in your neighborhood.

I have been to Japan several times. Mostly as a tourist, but in 2016, I lived in Tokyo for six months to learn the language and, above all, to take a close look at everything and getting to know the country and cityscapes from an everyday perspective that goes beyond the clichés.

Even during my second visit to Japan, it was sometimes difficult for me to recognize the beauty in the local street scene. A consistent structure is often missing, many different types and styles of buildings are mixed up, most of the houses were more convenient than beautiful, and there are hardly any street names.

A Japanese friend told me that she once had a visitor from Europe, who was very disappointed that there were so few traditional buildings to see. I think that we have a very kitschy, romantic idea of what Japan looks like, thanks to travel agencies and most of the travelers who tell the same stories over and over again by photographing temples, shrines, beautiful traditional houses, minimalistic buildings and interiors.

Reality is often different: chaotic, sometimes run down old little houses stand next to huge ugly office buildings – and in between there are always black above-ground power lines that run randomly wherever they’re needed. This was not what I had expected, when I came to Japan for the first time, but over the years I have developed a deep love for all these things. To share it, I take you on a walk from my apartment to the subway station in Monzen Nakacho, Tokyo, where I once lived. 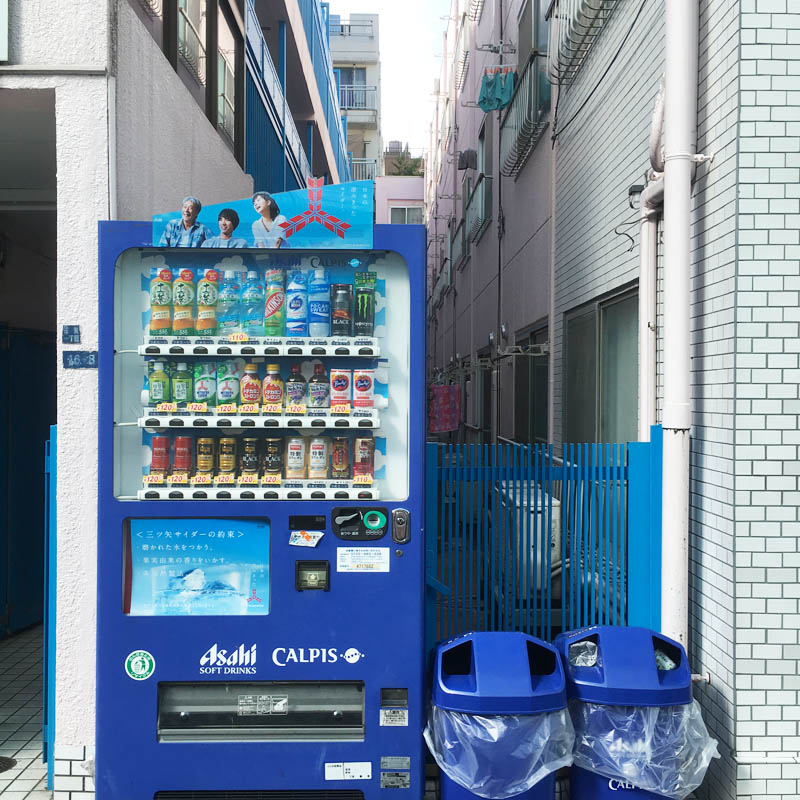 Right in front of my house was a vending machine – which probably went hand in hand with the coin-operated launderette on the ground floor. When it was very hot, I bought the third drink from the top right – although Pocari Sweat is not a good product name at all. 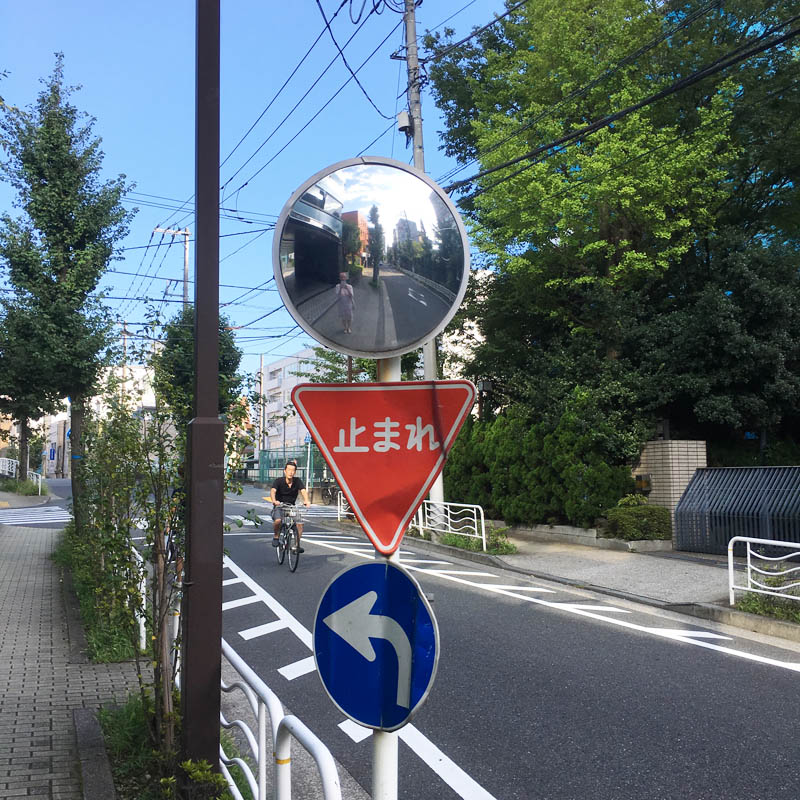 It did not take long to reach a slightly larger road, from where I could already see the small bridge that I was looking forward to every time. Since there was a large company building on the left hand, there were a lot of people around, especially at noon – most of all men in suits and white shirts, but also women with bobbing skirts, elegant blouses and lacquer shoes. Everyday Tokyo is quite conservative and boring when it comes to fashion. It is a false assumption that everyone would walk around with colorful hair and in freaky clothes. Instead, women wearing pleated or bell skirts, nice pumps, three quarter length trousers with wide legs, as well as wide, simple tops or those with frills, a high neckline and in dignified colours, dominated the subways. 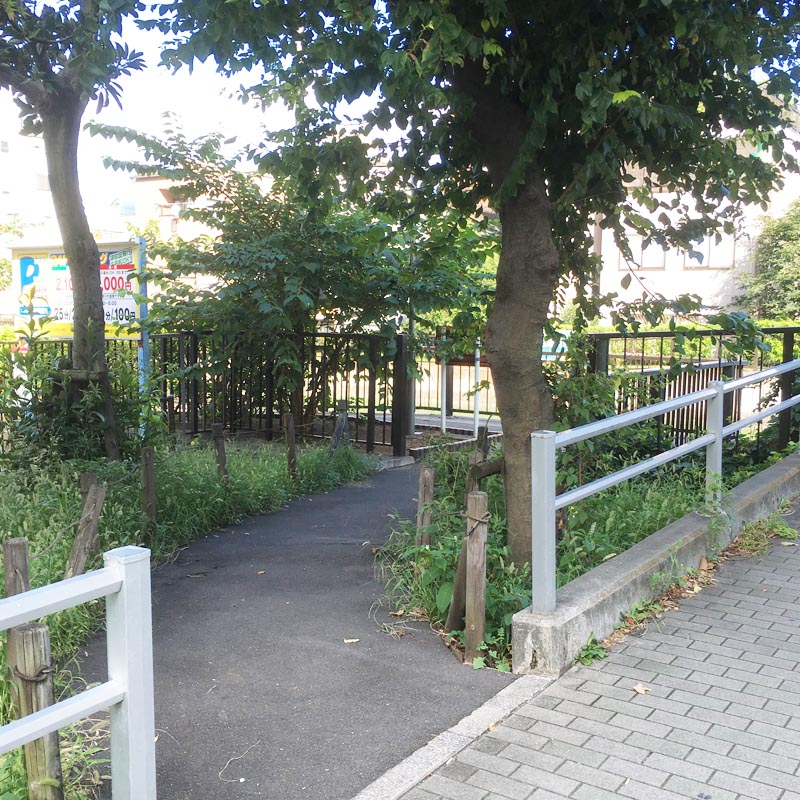 Here, either construction workers sat on the ground and took lunch breaks or Salarymen stood in a circle and talked. Sometimes a man held a fishing rod over the balustrade into the water and hoped for a catch. On rare days, all three events took place at once which gave me a lot of pleasure. 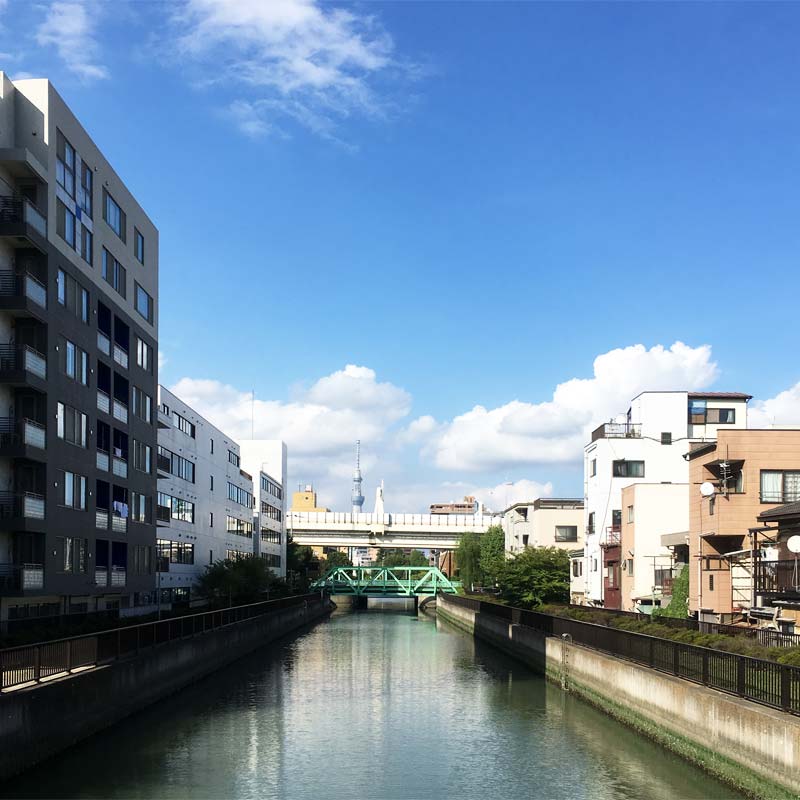 When I crossed the bridge, my first look was always to the left towards Skytree. In the evening, it was prettier, though, because of the Illumination and different lights circling around it. 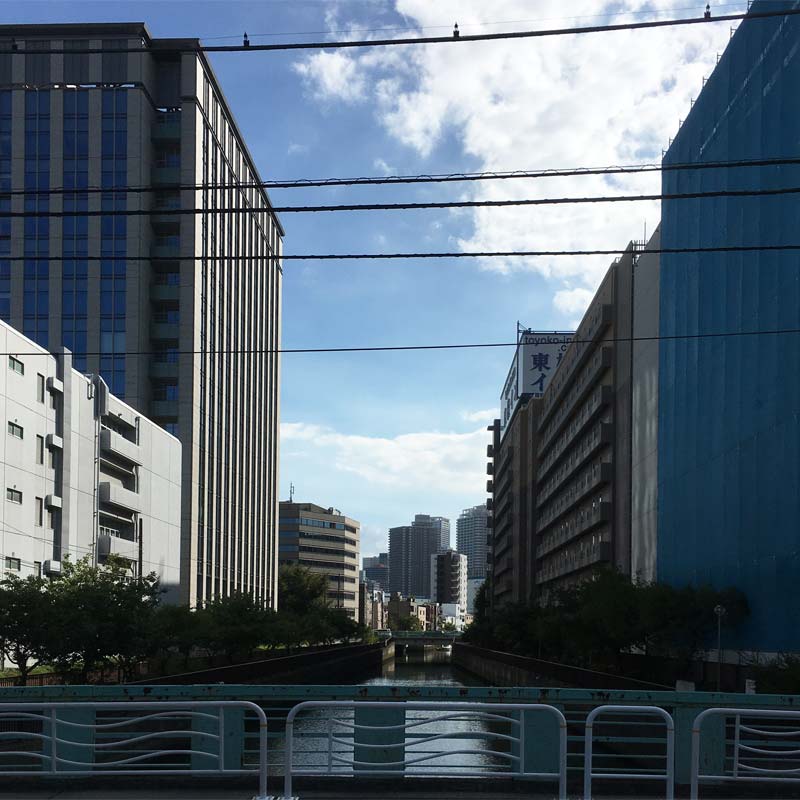 The view to the right seemed less beautiful at first, but I liked the clenched arrangement of different skyscrapers in the distance, which told me that I was in Tokyo and not in a small town. It was easy to forget, because there were no street noises at all and it was incredibly quiet.
A phenomenon I have often encountered in Japan – even a few minutes walk from Shibuya Crossing.

An old couple lived here. On Sundays, the window was covered by a blue curtain, whereas it was open and served as a tiny sales point for baked goods and tea during the week. When I passed by in the afternoon and cast a quick glance through the door, I saw the old lady sitting on the floor at the table. I imagined that she had lived here for decades and had simply adapted to the world outside by supplying the office people with lunch snacks. There was always an intense smell of wood and the past.

When I moved to this area, I had my first encounters with a lot of cockroaches. I could hardly sleep because of my disgust and was therefore completely exhausted. And yet, I imagined how the old couple, unlike me, lived in peaceful coexistence with the animals, just because it has always been that way. Unfortunately it did not help me to relax, but in the end, chemicals and all kind of cockroach traps did. 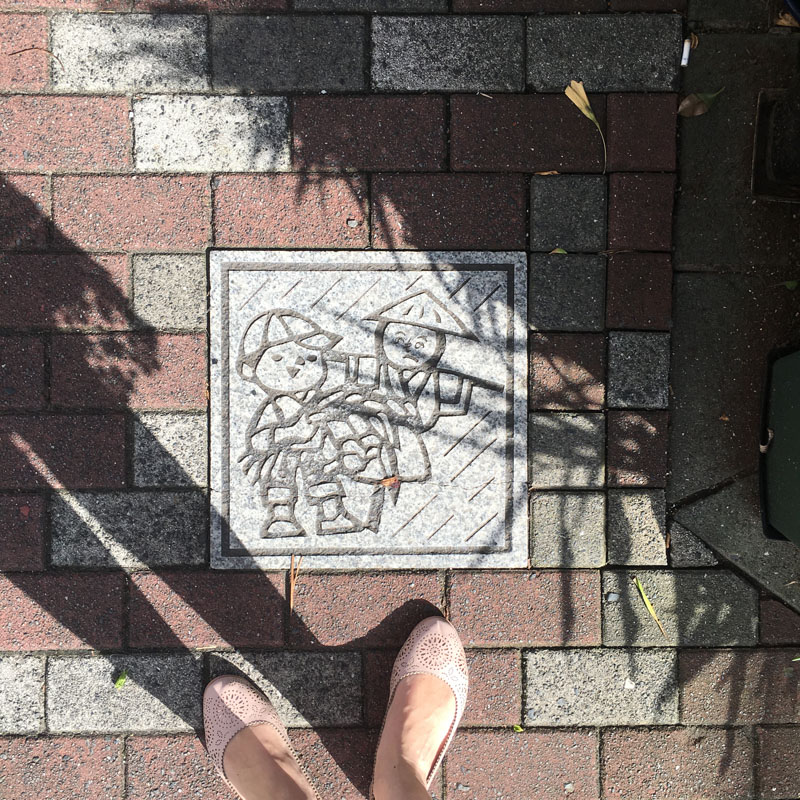 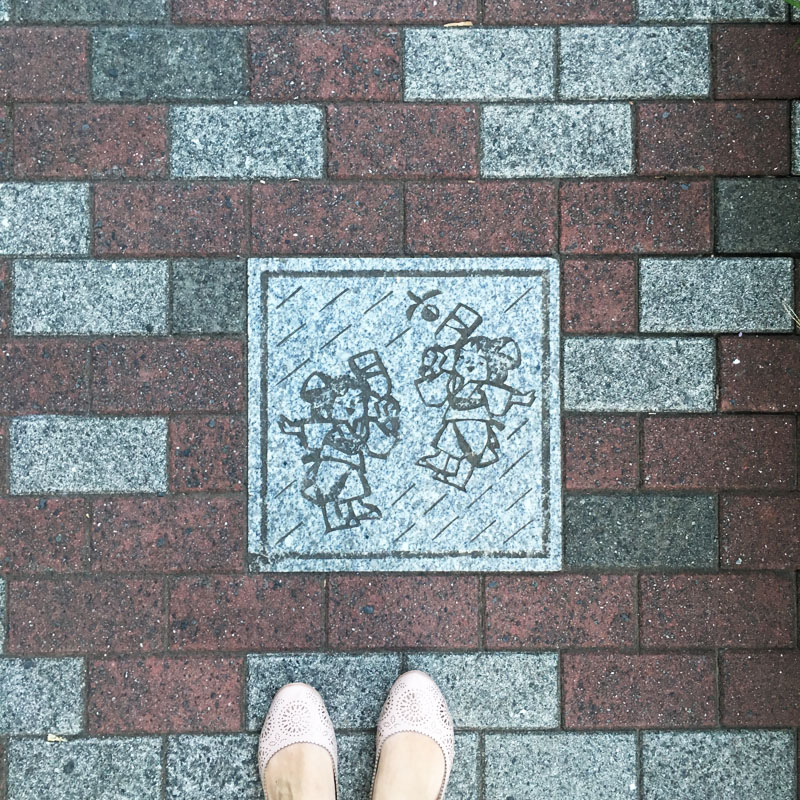 The pavements in this area had all sorts of ornaments. The pictures show field workers, geishas or samurais and always made me smile. 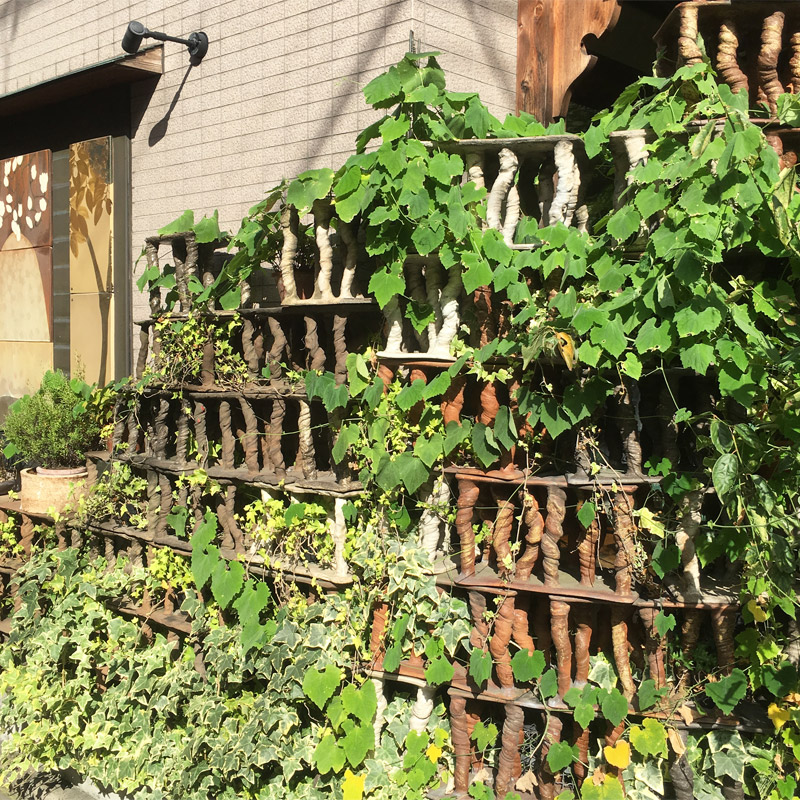 I was fascinated again and again by this wall of plants behind wich I suspected an expensive restaurant. In the evenings, I was able to see a room with a bar, where elegant people – most of the ladies wore delicate kimonos – had drinks served by a well dressed waiter. 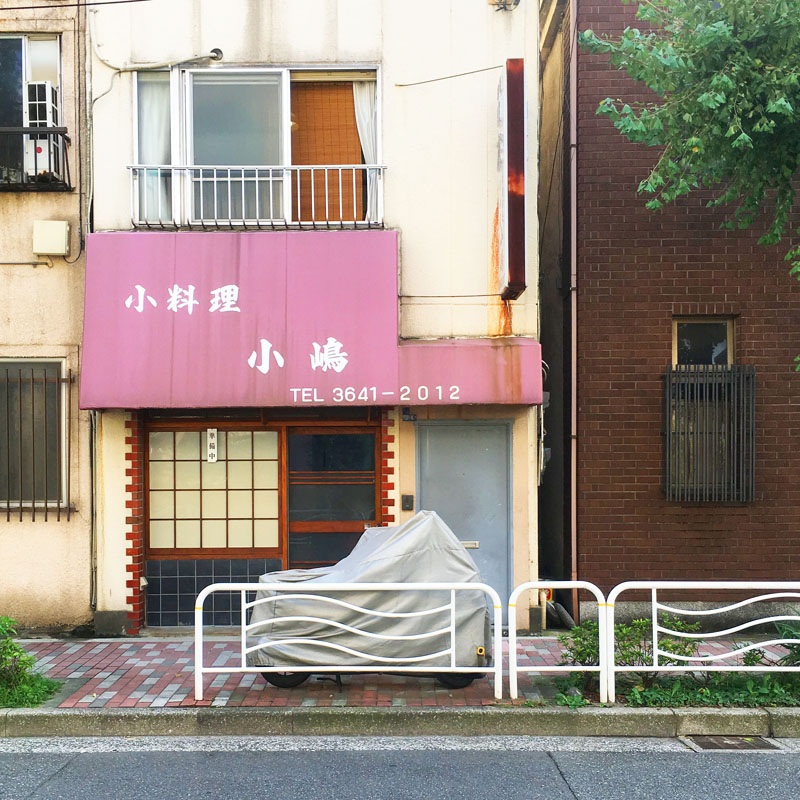 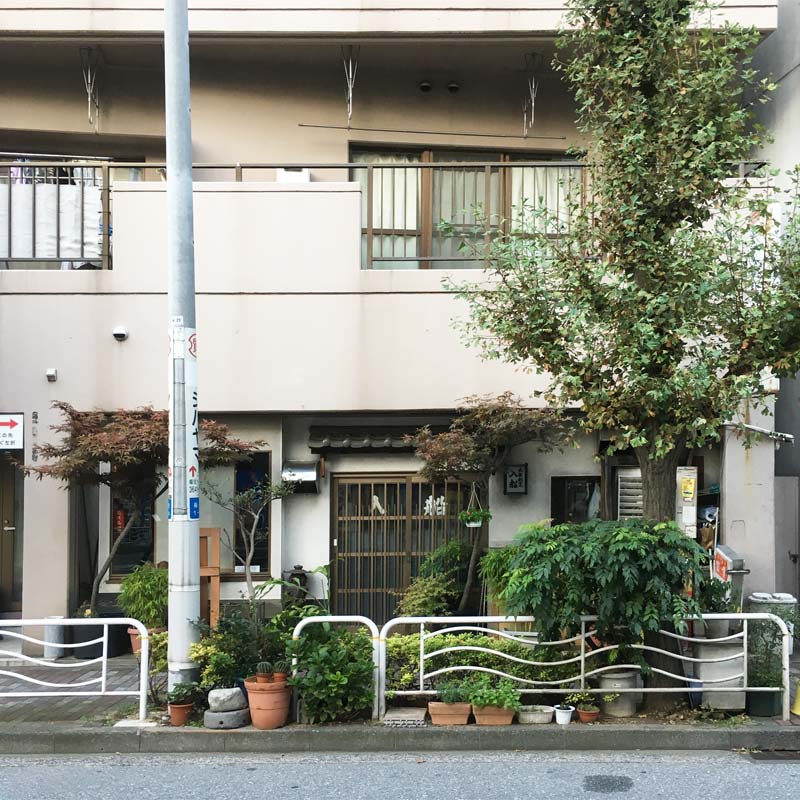 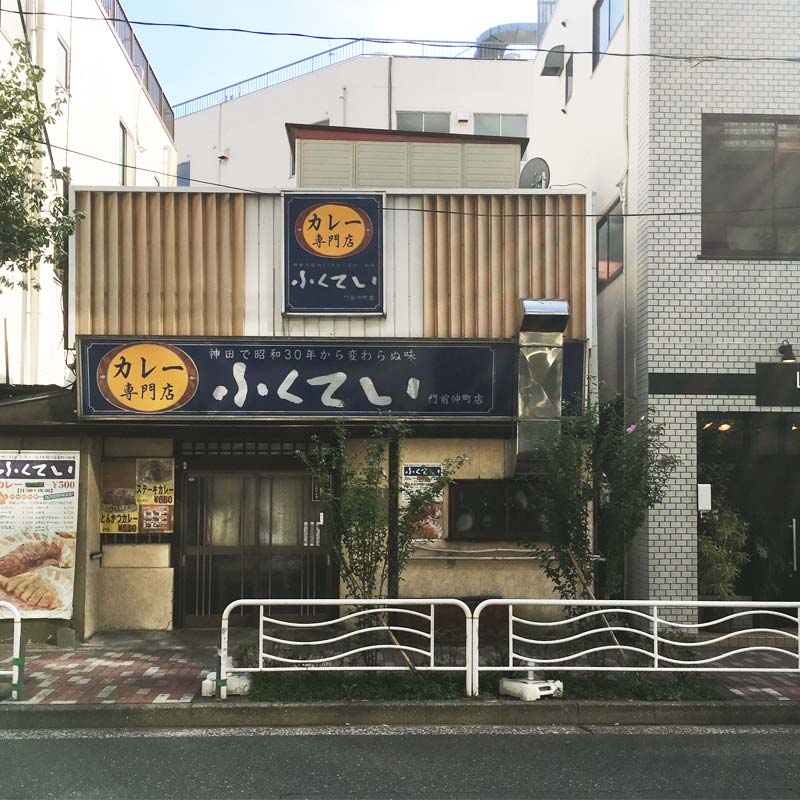 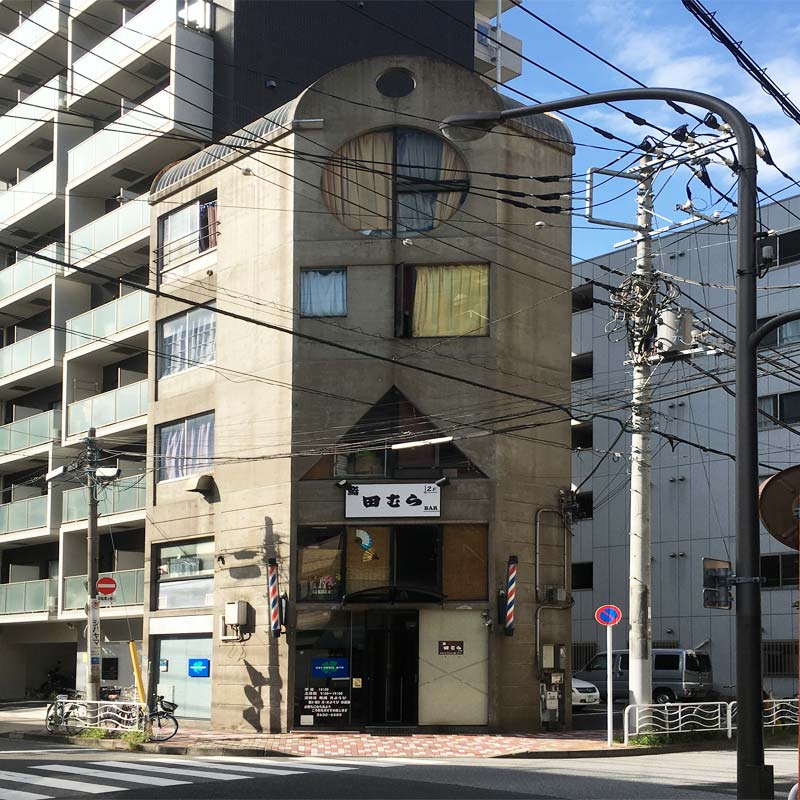 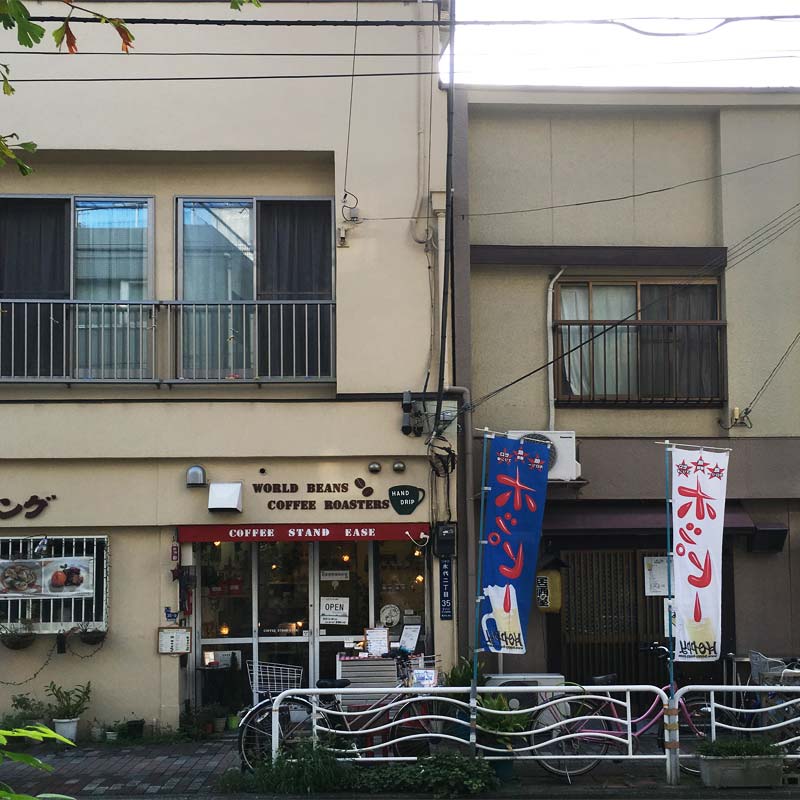 On weekends, the restaurants were closed, but at least I had the opportunity to take pictures without anyone feeling bothered. The street was quite deserted, and I still remember how this fact worried me when I visited the area for the first time, on a Sunday. Since then, I often went home late at night and have never been afraid, on the contrary, I was able to enjoy the wonderful summer night atmosphere. I have never been so relaxed in Berlin due to many street harassment experiences, and I sometimes miss this freedom. 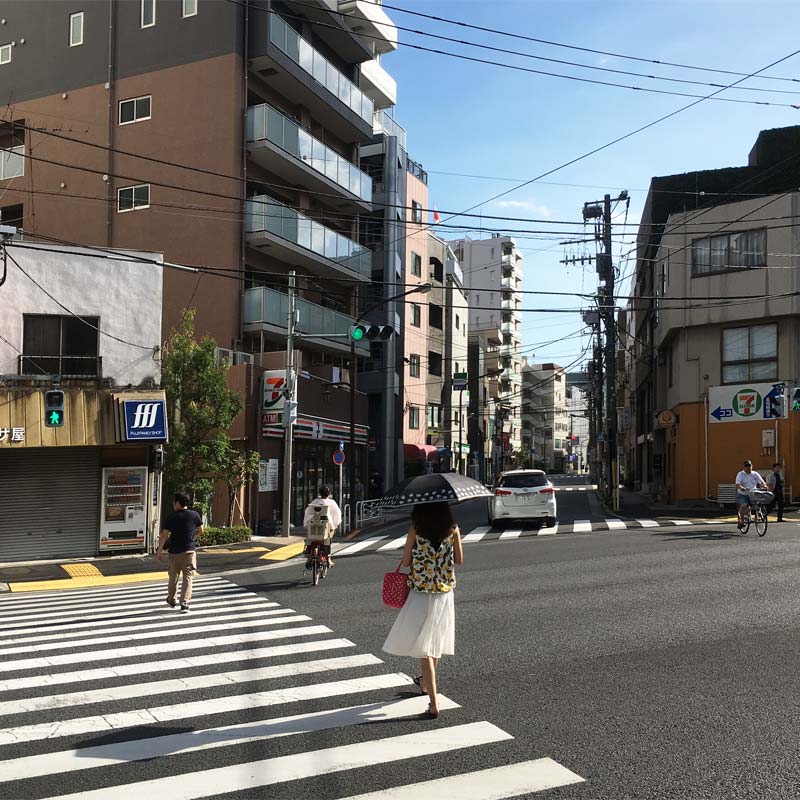 The traffic light phases were always very long and sometimes I had to wait in the summer heat for several minutes, protecting myself with a small parasol. A challenging situation, especially when I was in a hurry, because nobody crossed the road while the sign was red. When I dared to do so once because I would have been late for class otherwise, people stared at me with horror. However, I had long since copied the proud, ignorant attitude of many women in Tokyo, and in such moments I simply walked a little more upright than I already did before. 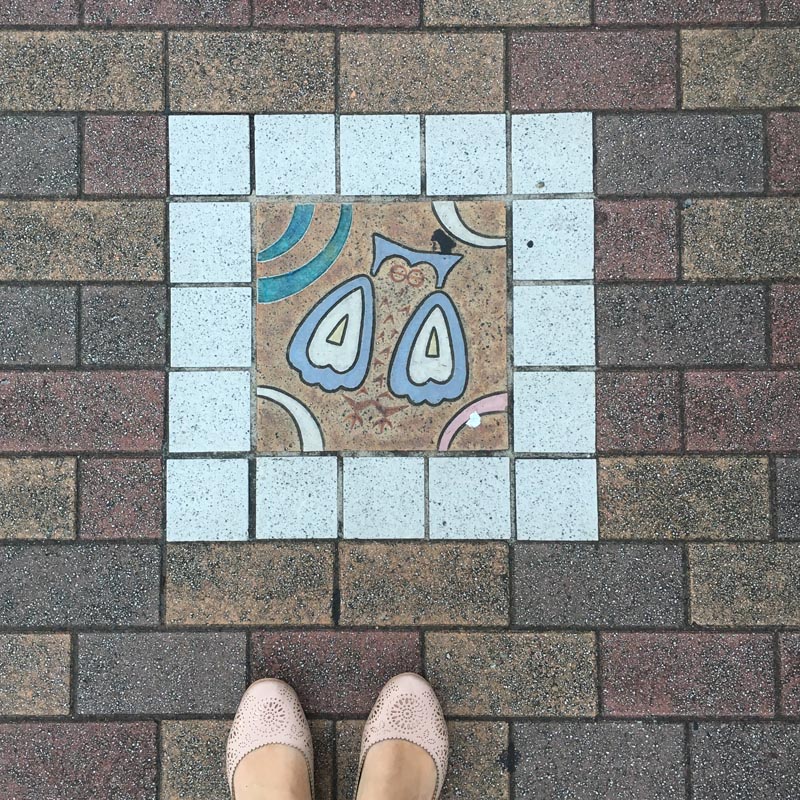 As I crossed the street, the pavement ornaments changed. From here on, I was delighted with pretty animal mosaics. 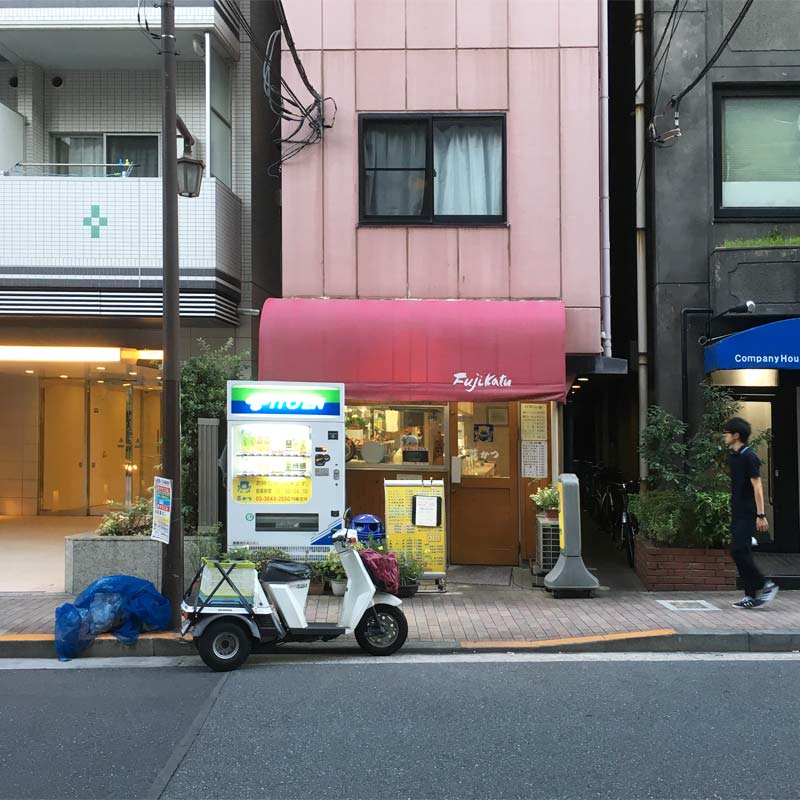 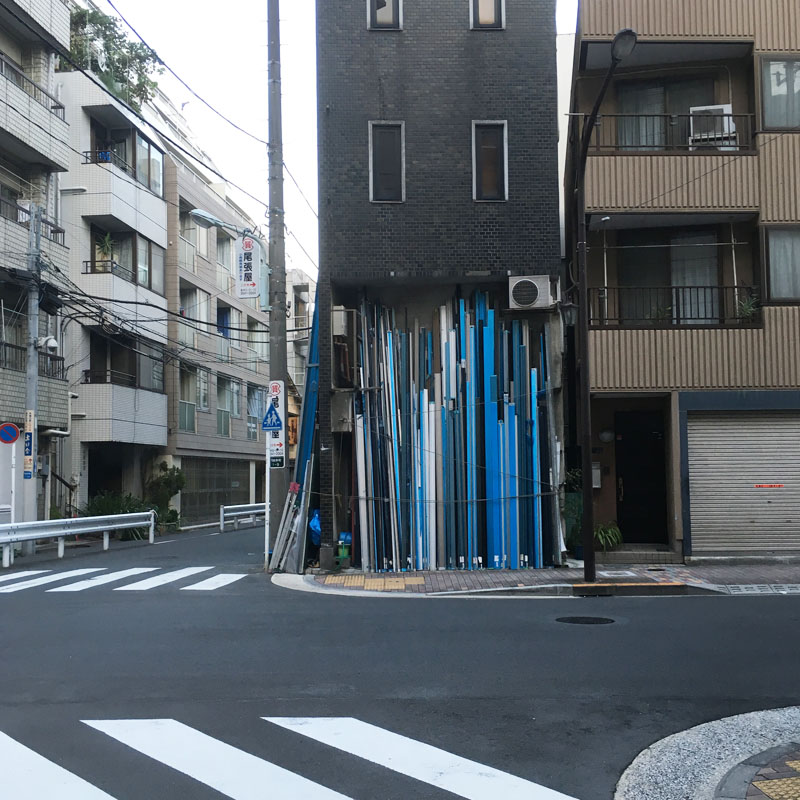 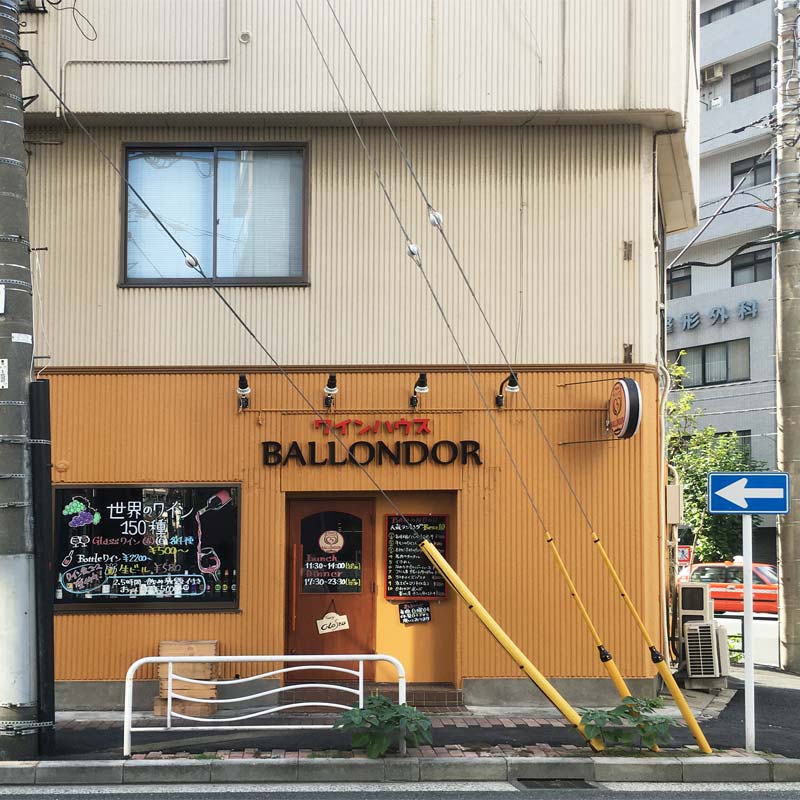 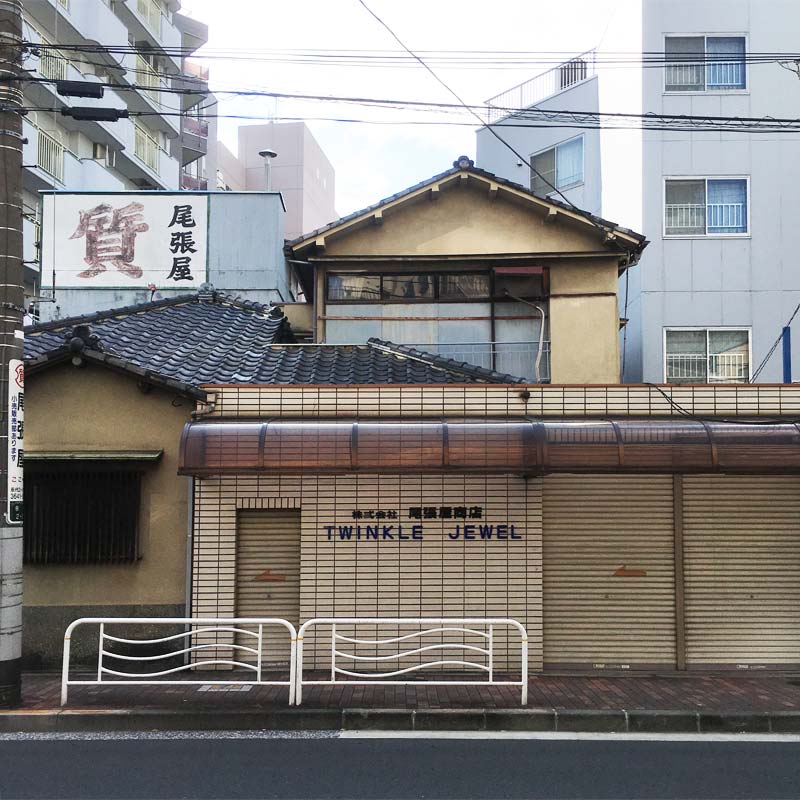 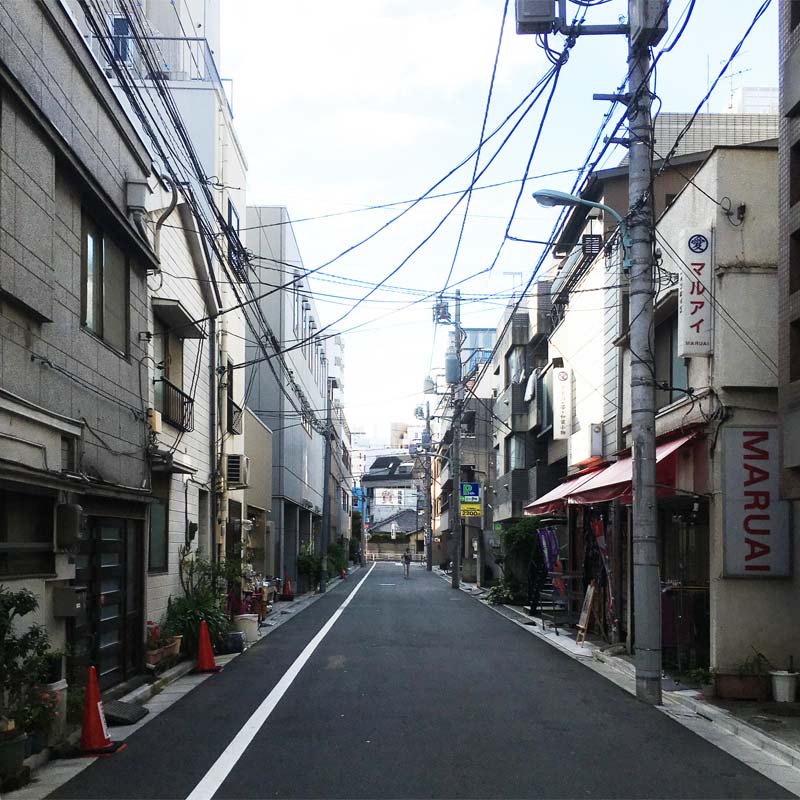 After I had passed all these spots, I got to the main road, where it was suddenly loud and bustling. 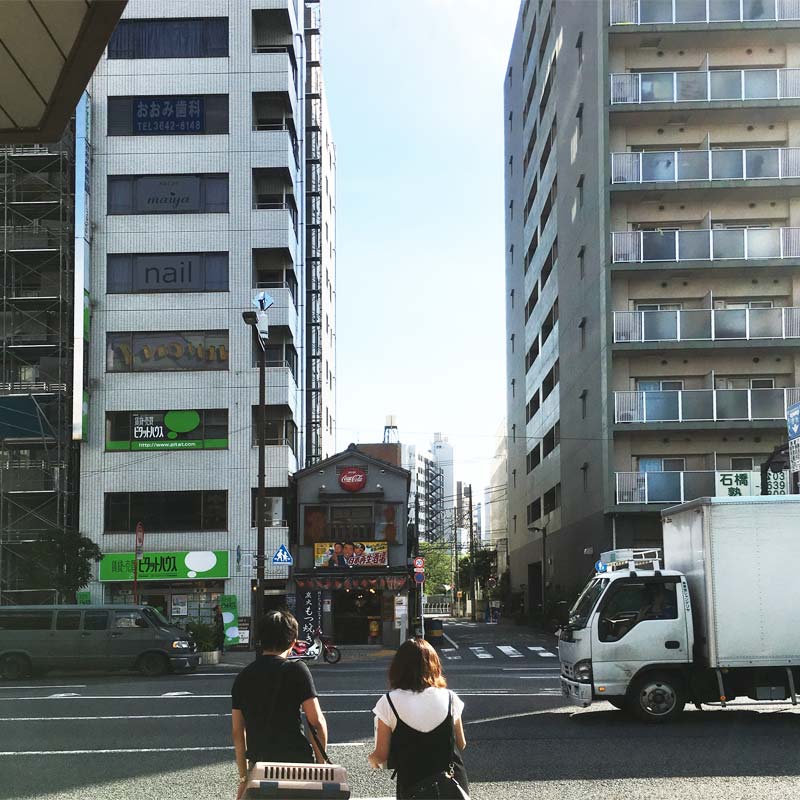 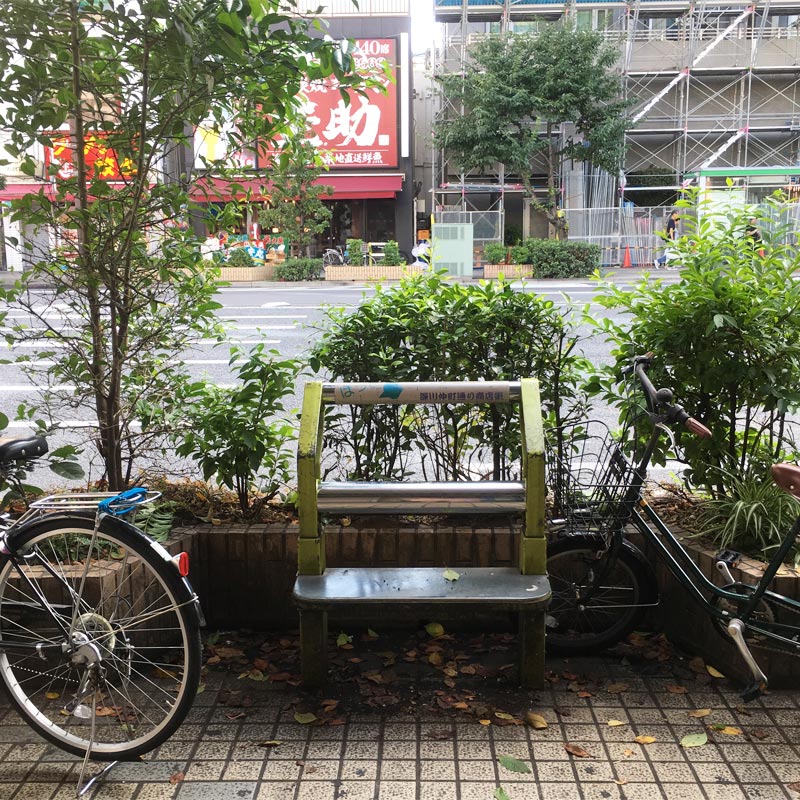 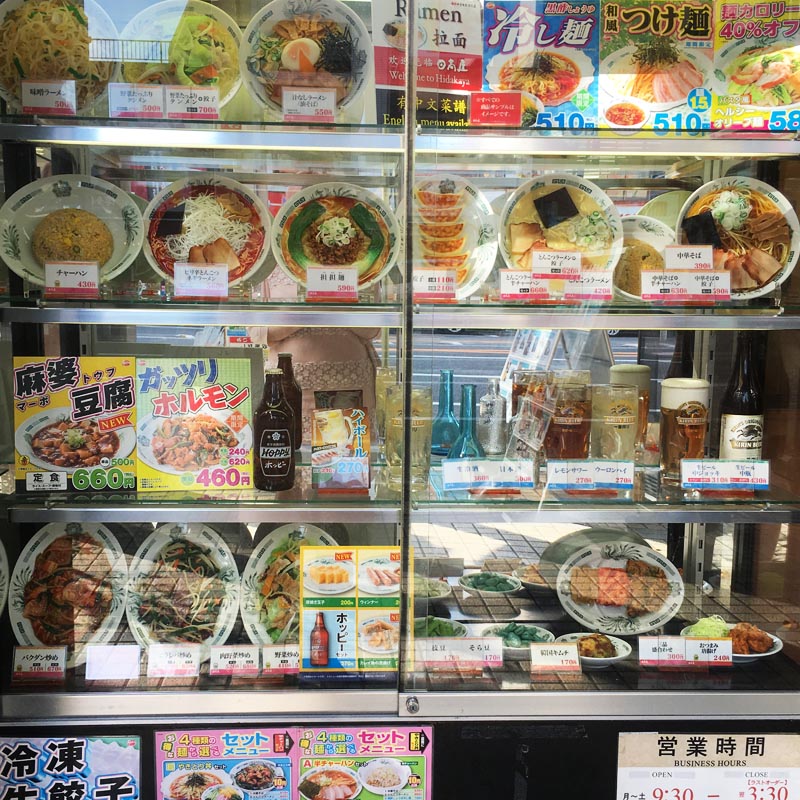 Konbinis, shops and restaurants lined up here. I could have gone out for dinner somewhere else every evening and probably still would not have known every place. In the end, however, I often chose one of the cheap Ramen restaurants, and I especially enjoyed the third dish from the left, in the second row from the top: Tantan men which is not even typical Japanese. 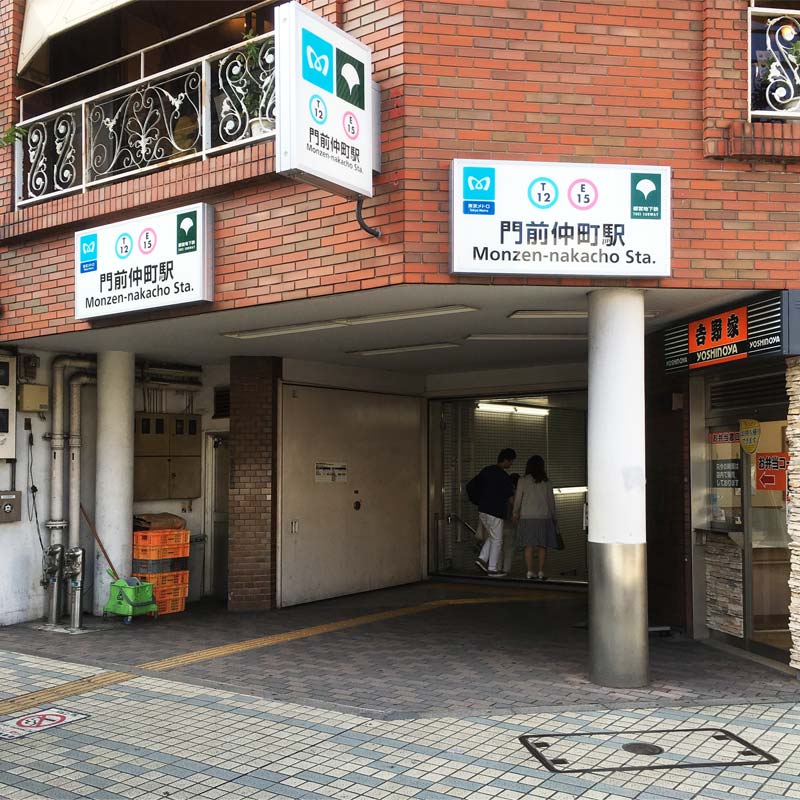 Here, I usually went underground and vanished, at least for a while, entering another Tokyo microcosm wich is very different from the subway world in Berlin.