Last month we’ve been invited to get to know a real specialty from Hakata (Fukuoka, Kyushu) that usually isn’t available in Germany, not even in Europe: Ikkousha Ramen, created by the company’s founder Kousuke Yoshimura. He hurried straight from Berlin airport to the event location, in order to make us happy with his cooking skills.

The ramen tasting took place at Café Arabica in Kreuzberg, first German branch of the renowned Japanese Coffee brand. As it’s closed in the evenings, the café was a perfect place to introduce another high quality delicacy to the Japanese food and culture scene in Berlin.

There are many Ikkousha restaurants in Japan, and you also get the chance to enjoy Yoshimura’s ramen creations in other Asian countries, even in Australia, the USA and Brazil. Eventually, Ikkousha is interested in coming to Berlin and other cities in Europe. That’s why they want to learn from the locals and get to know their individual taste. A great opportunity for us to broaden our ramen expertise and help them out at the same time! 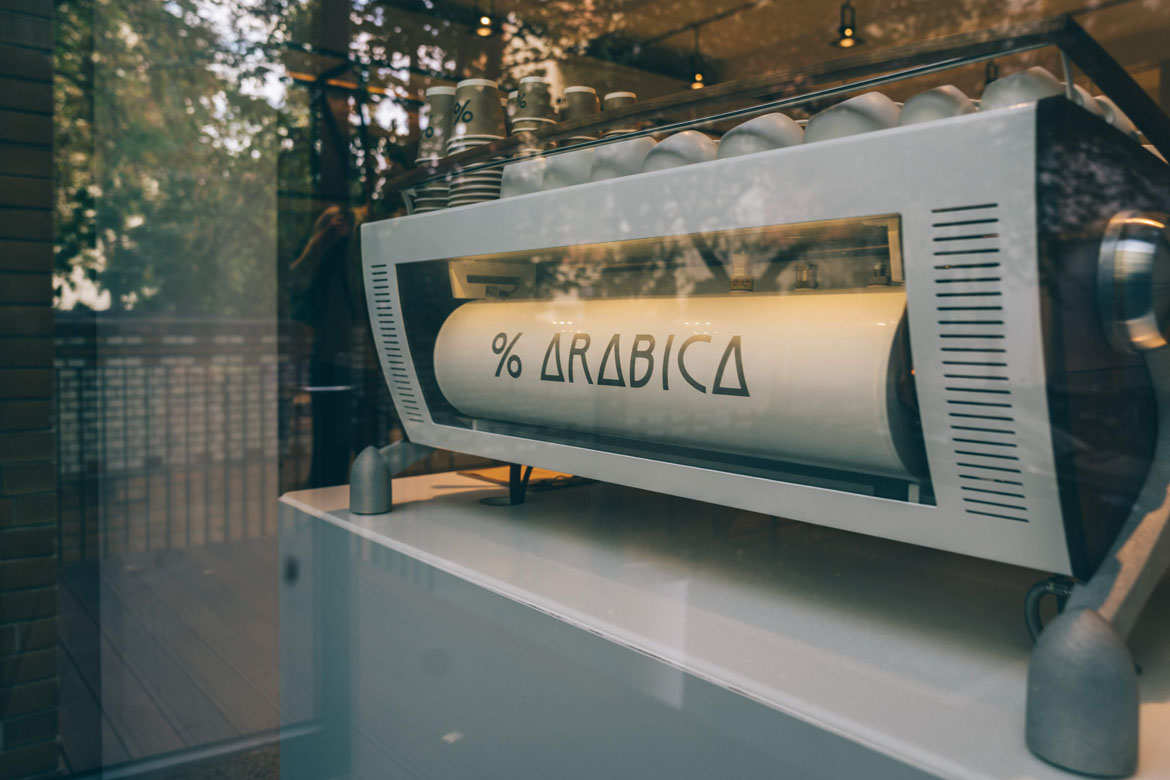 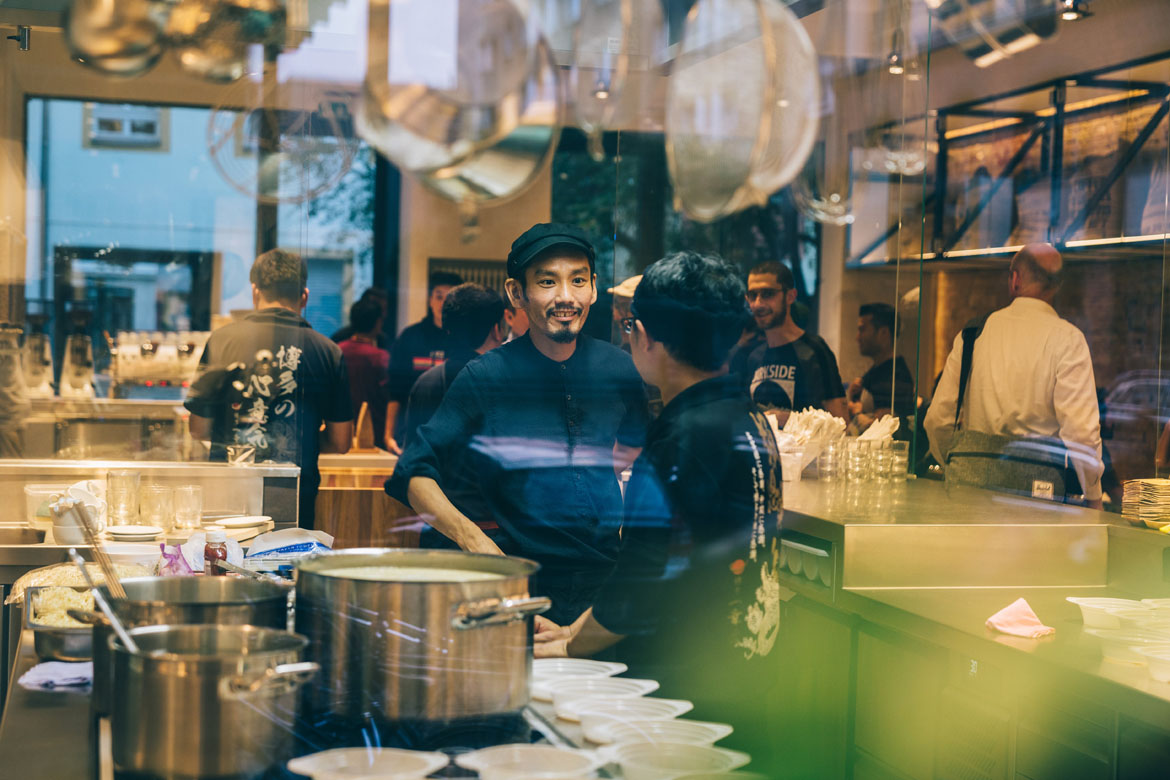 Every ramen recipe has its own characteristics. Masters like Kousuke Yoshimura combine different ingredients to make their signature broth and match it with the most suitable noodles and delicious toppings. They create a very unique taste, their own perfection. Thus, customers will always recognize it.

Tonkotsu ramen – its broth is based upon pork bones – is a regional soulfood of Fukuoka, originally prepared as a fast food for workers, whereas the Ikkousha version is designed to elevate the nostalgic taste to a more refined level. I’ve been really curious to find out what that means. 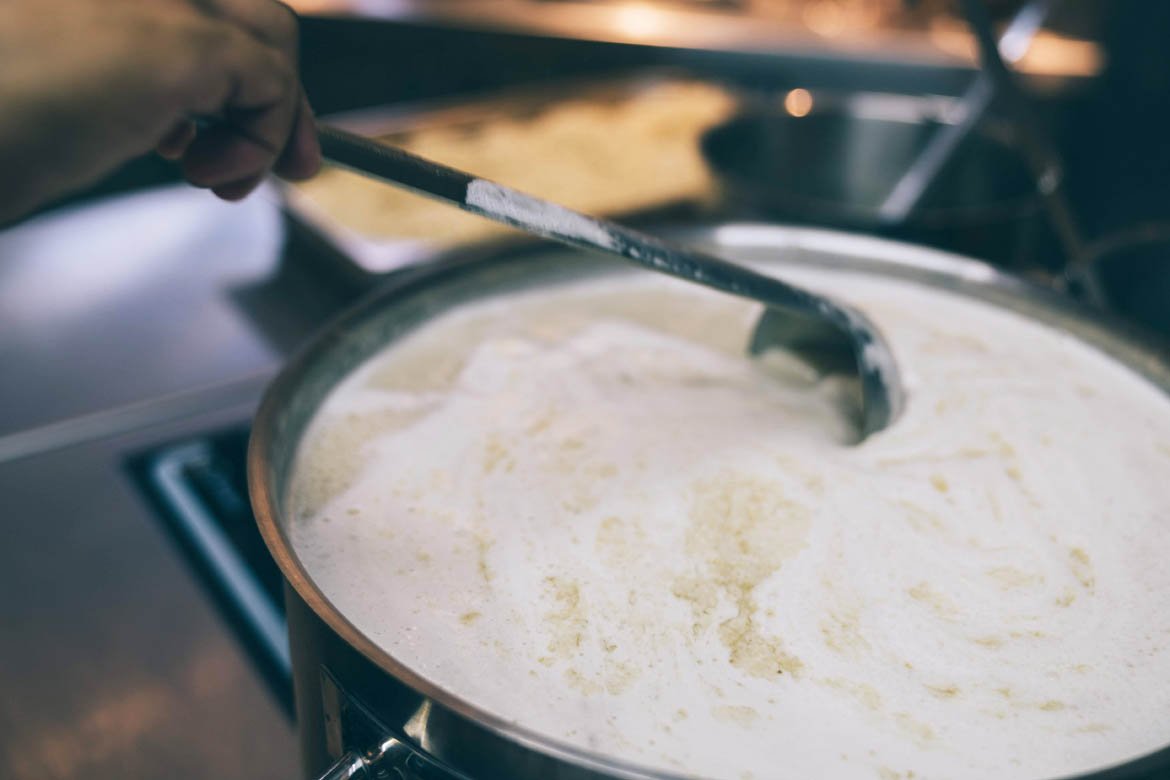 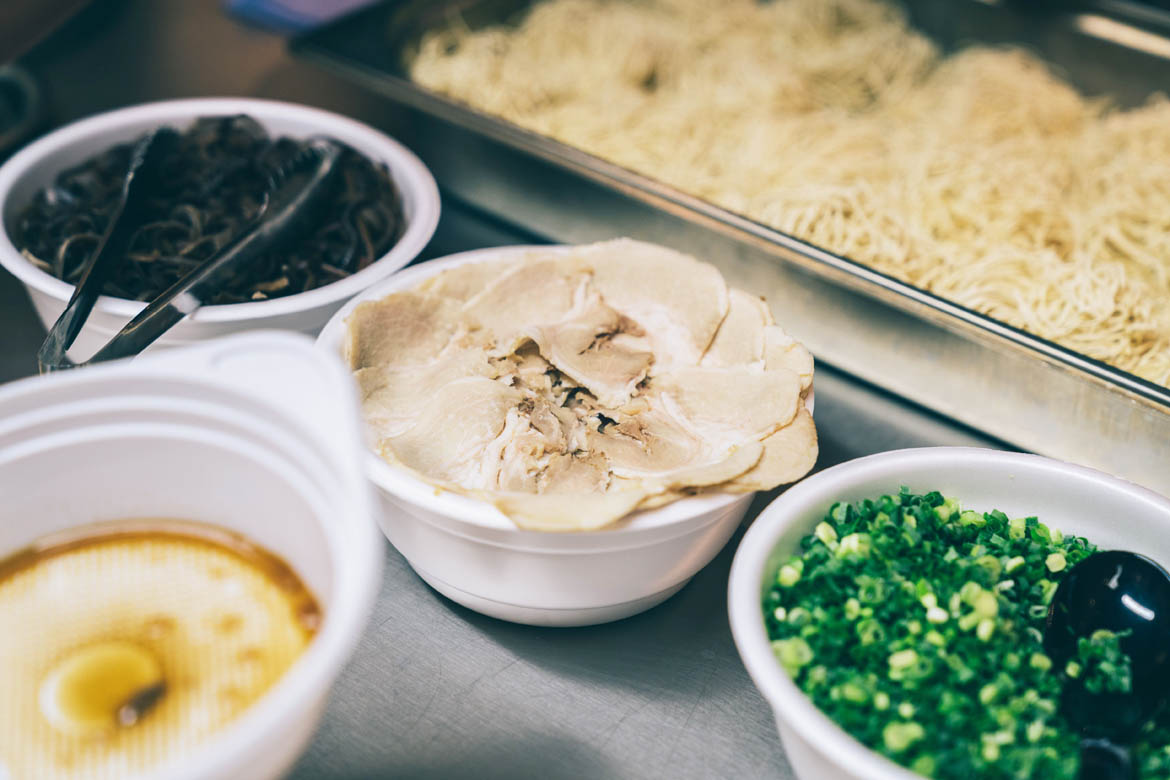 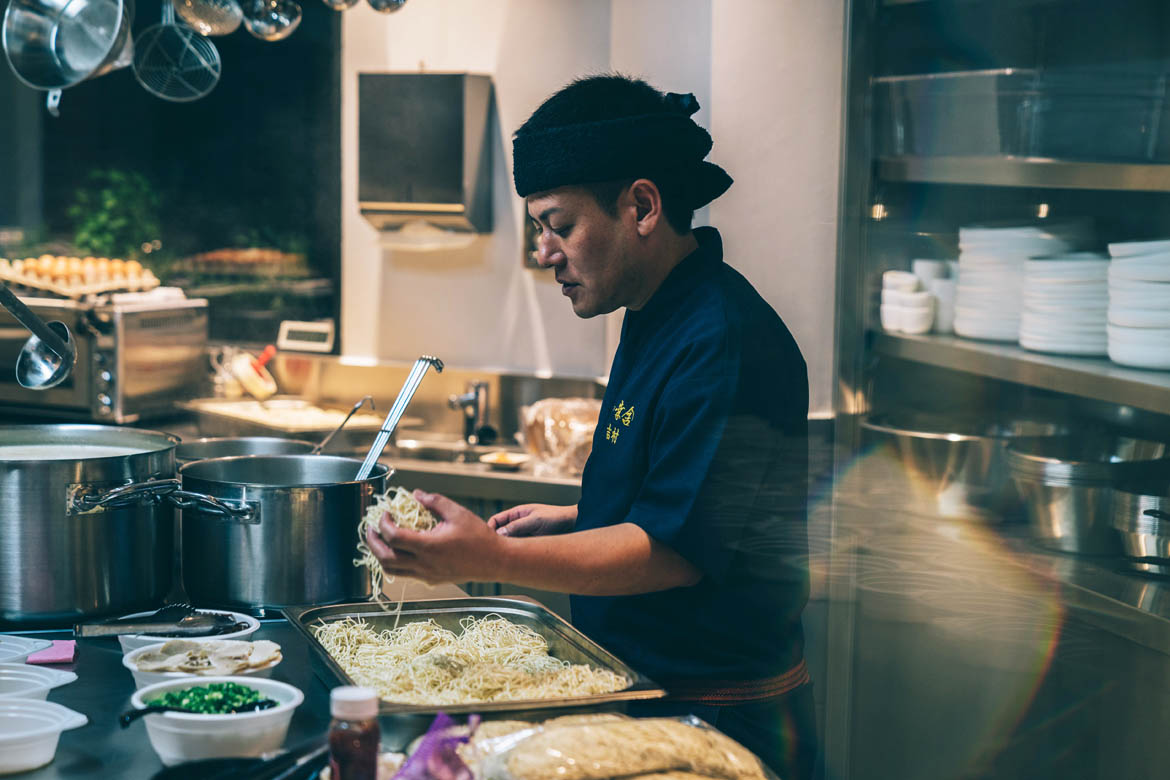 Ikkousha tonkotsu ramen consists of several main components. Let’s start with the broth, which is quite milky and has a nice greasy sweetness. Yoshimura and his team use a specific boiling method, called yobimodoshi to really extract the full taste from the different pork bones.

One secret of Ikkousha’s tonkotsu ramen is a yakumi paste, that contributes hints of black pepper and garlic. The other one is the ramen sauce: Yoshimura blends three regional soy sauces and adds five different seafood essences. He also marinates pork belly in it, so the sweetness of the meat becomes part of the sauce, too. Pork belly slices are later added to the ramen. Just like some kikurage (black fungus) and spring onion rings.

Last but not least there are the noodles! Yoshimura designed them thin and flat, especially for the rich pork broth – and to minimize the cooking time. He told us that the people from Hakata like their noodles al dente.

I like them al dente, too, and I really enjoyed the noisy slurping while eating. A sound that you usually don’t hear in German restaurants, where silent eating is preferred. Not so in Japan when it comes to ramen, which is great, because slurping is the most comfortable way to eat this dish. 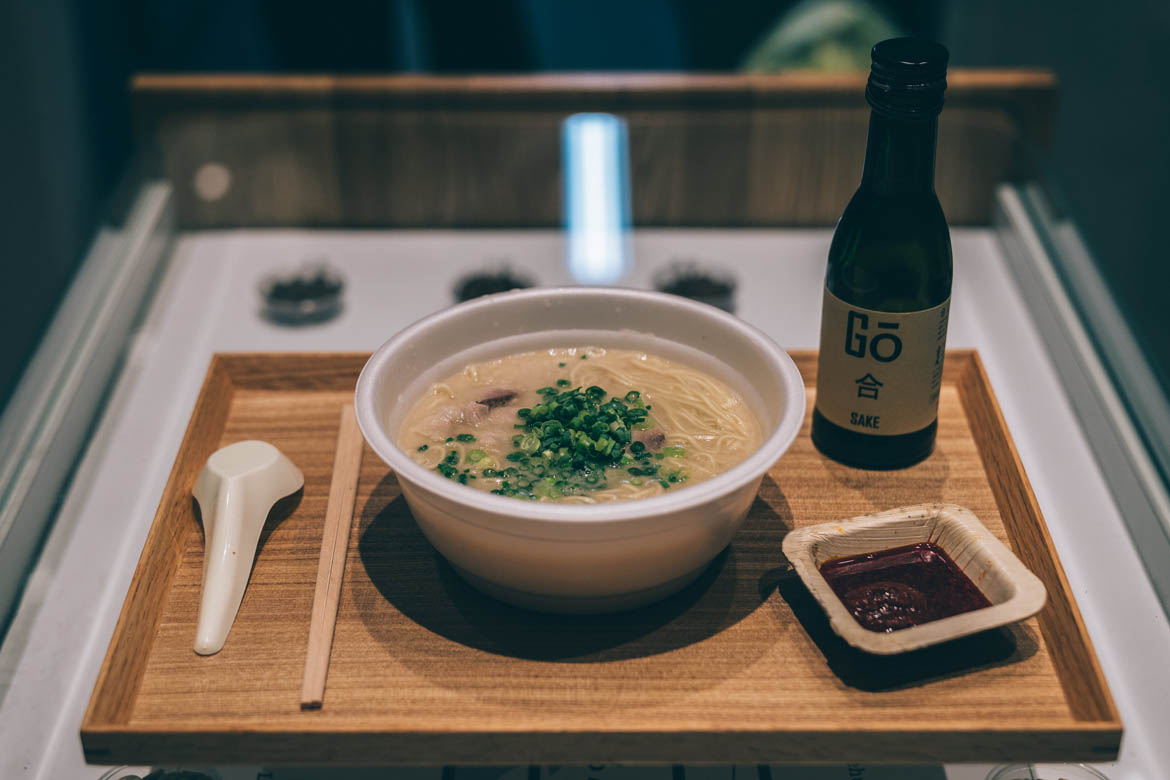 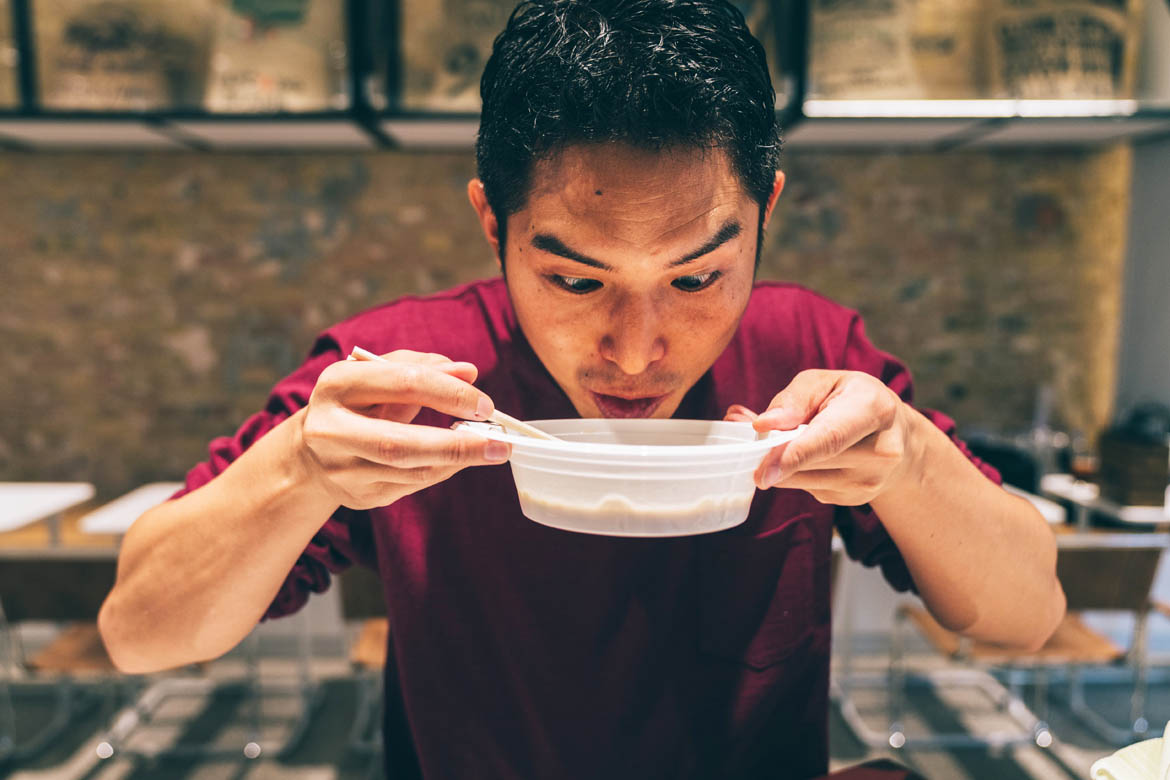 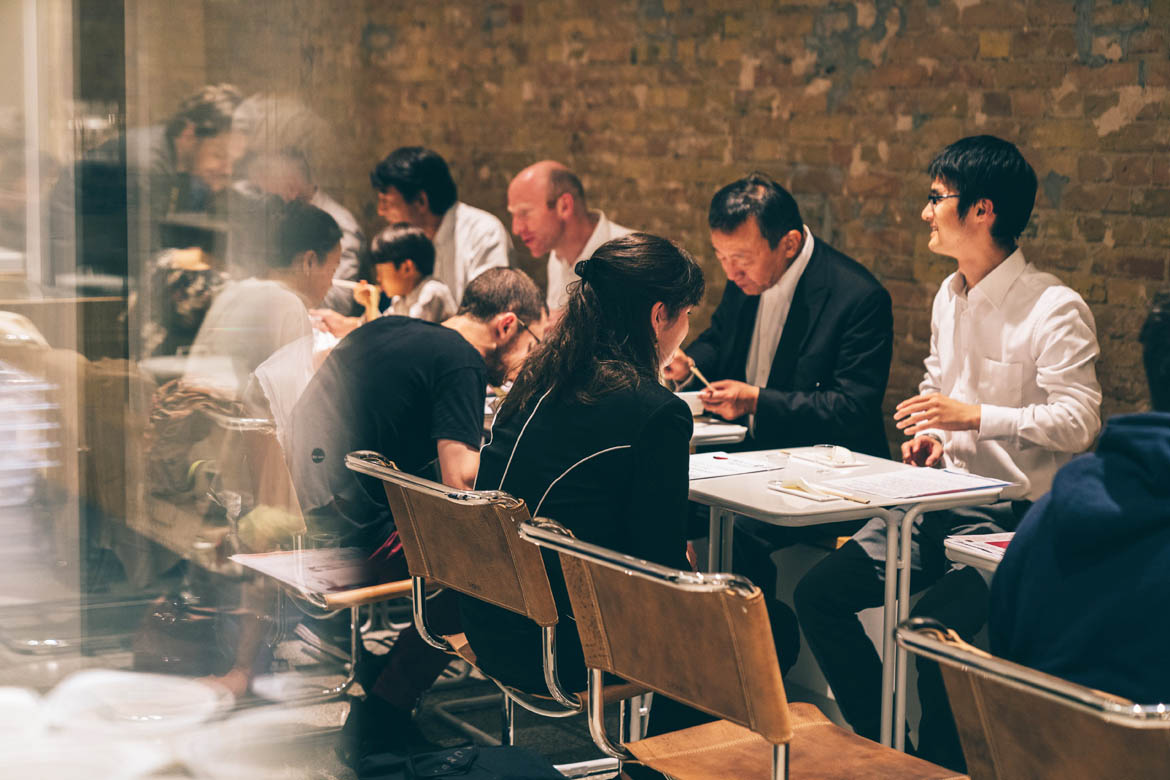 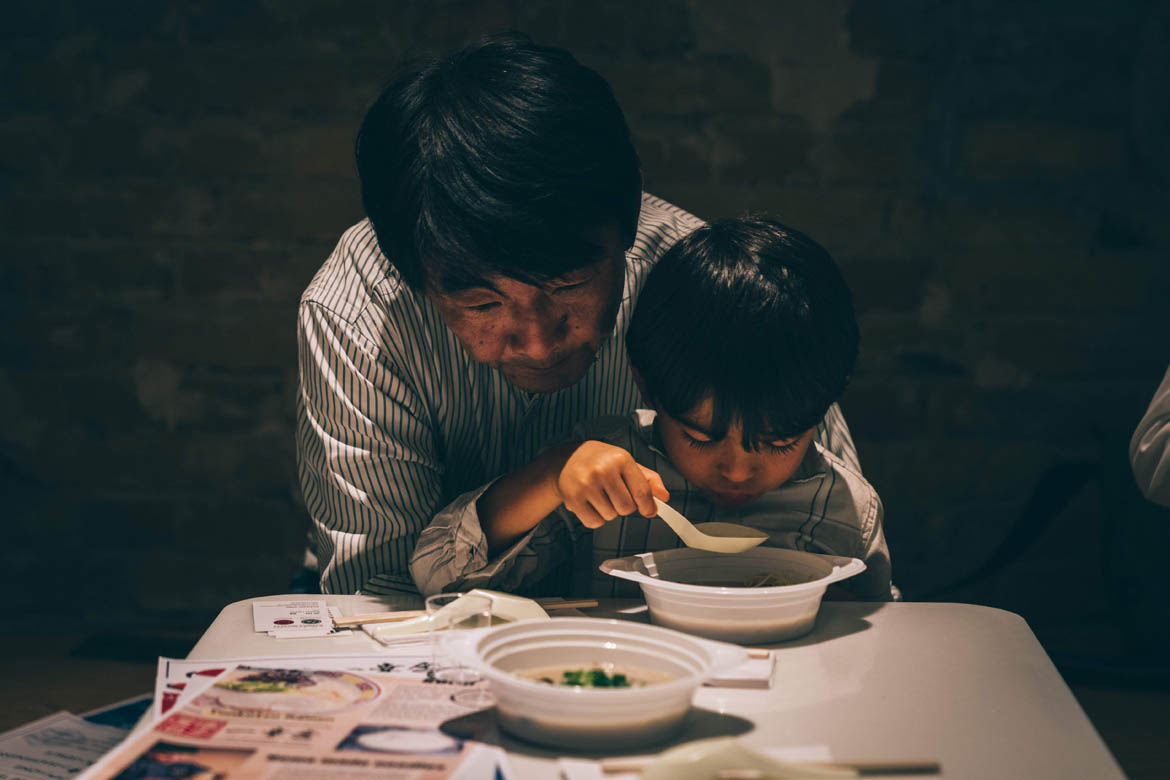 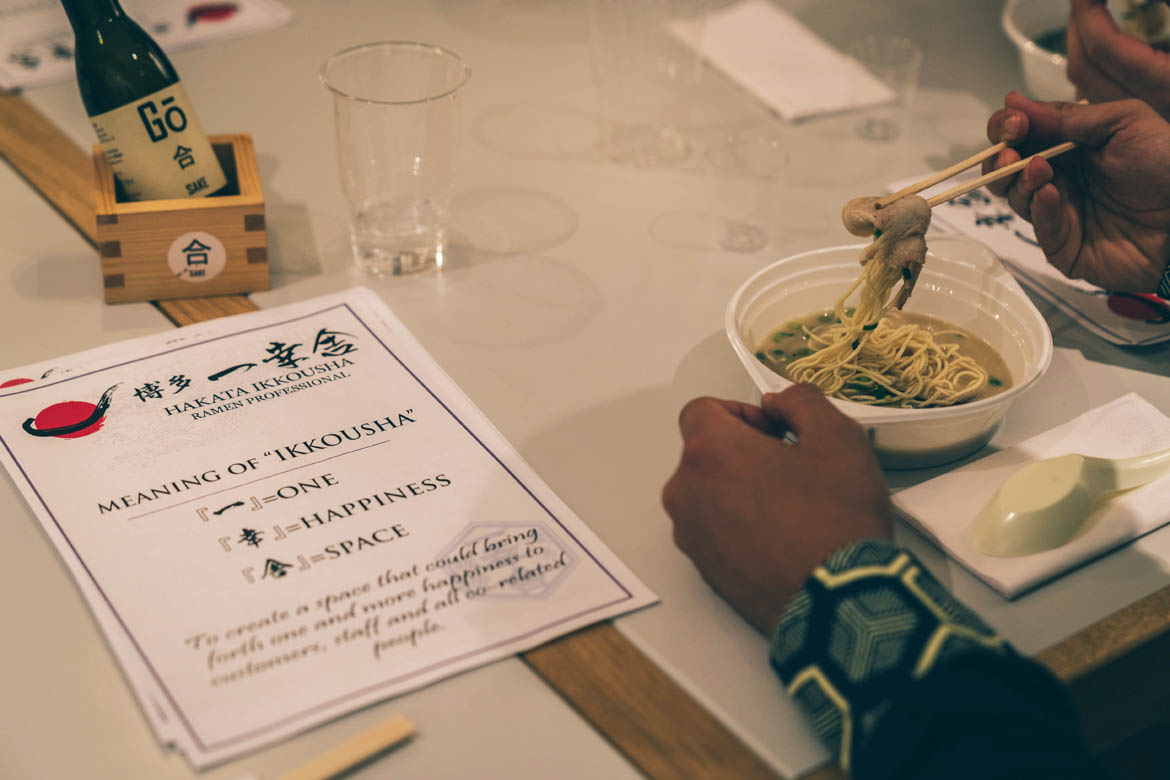 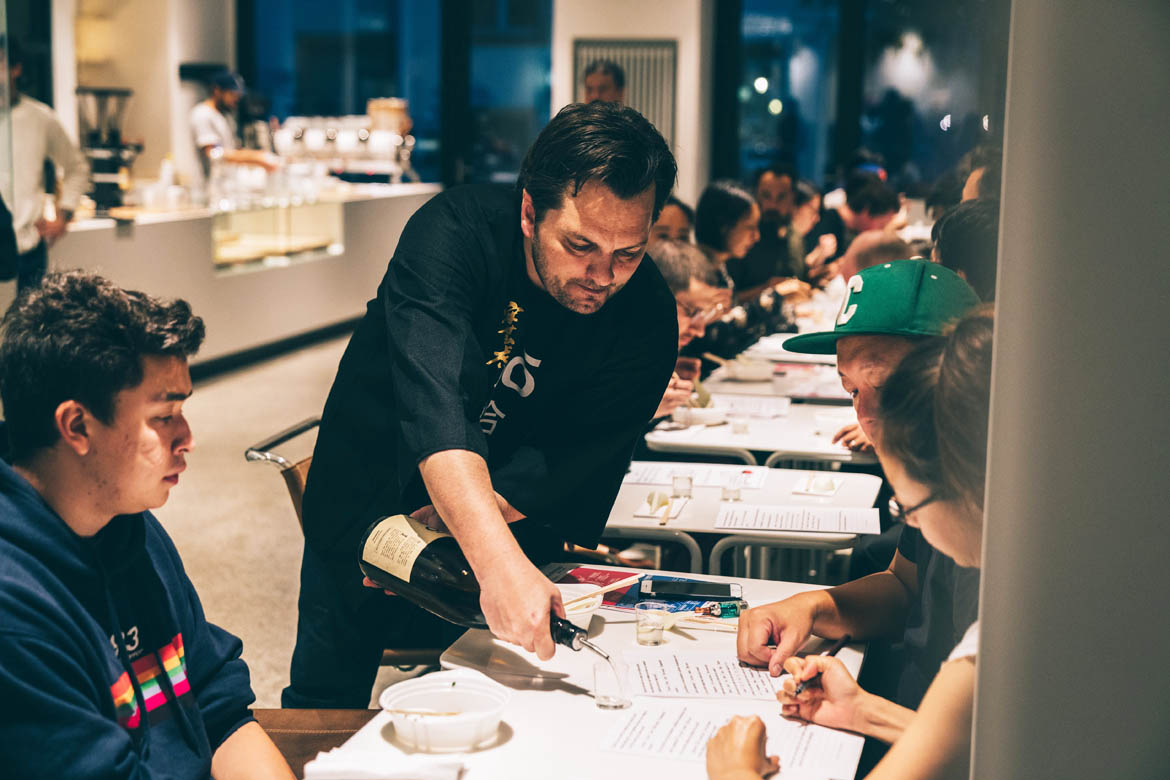 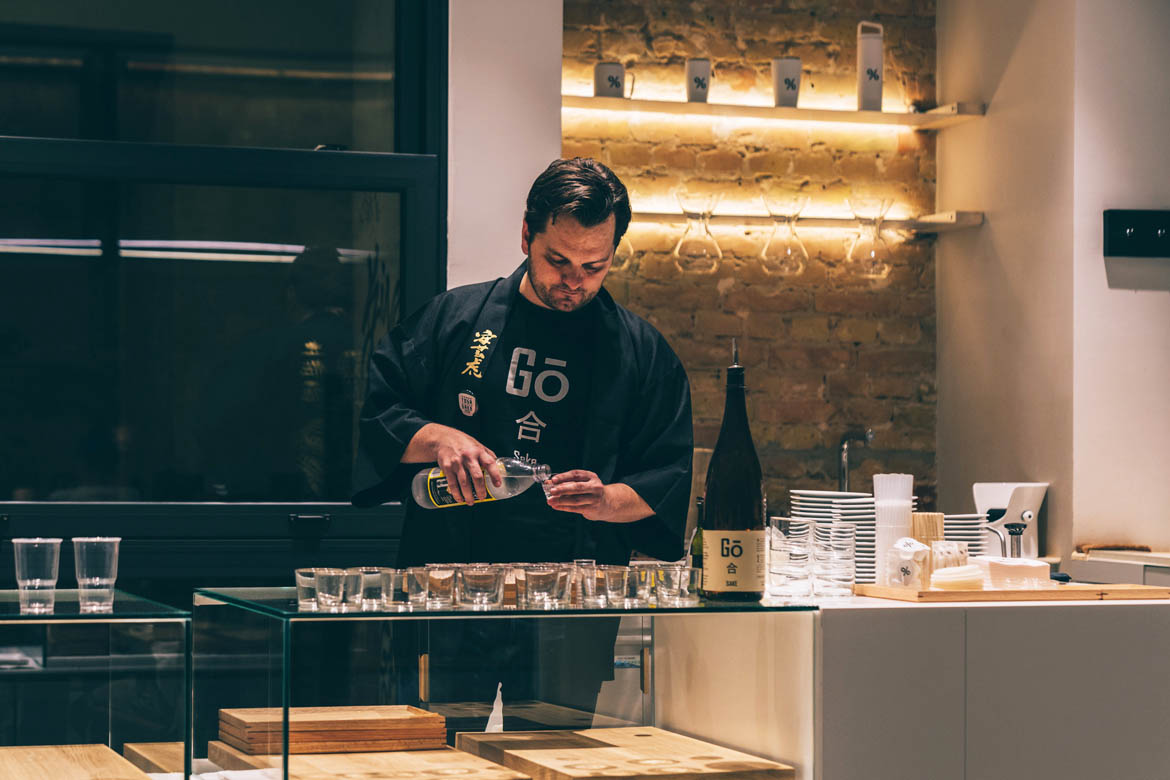 And while we’ve been eating or already waiting for the second round, Bastian from Go Sake gave us his full tasting treatment of Berlin’s first designed sake, brewed by the Arimitsu Brewery from Kochi.

The sake was a good preparation for what came next: the really spicy version of the classical Ikkousha tonkotsu ramen. I’m not sure how much chili they added, but it was the most spicy Japanese dish I ever ate. Maybe the average Berliner wouldn’t like it that way, but I always enjoy spicy food and tan tan men is my favorite ramen. This is also something I added to the questionnaire we were asked to fill out after the meal.

I really would love to eat Ikkousha ramen again, also to have more variety in Berlin. And there is always room for places full of happiness (a free translation of Ikkousha).

gochisosama deshita and thanks for the invitation! 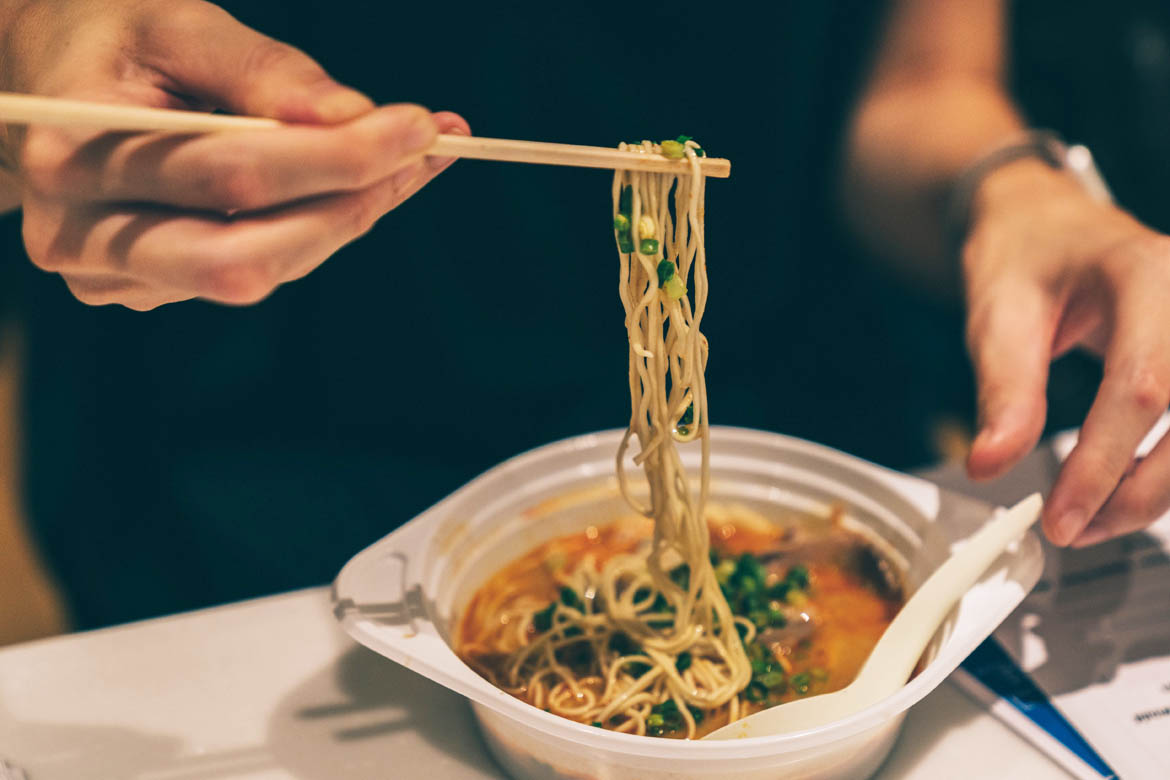 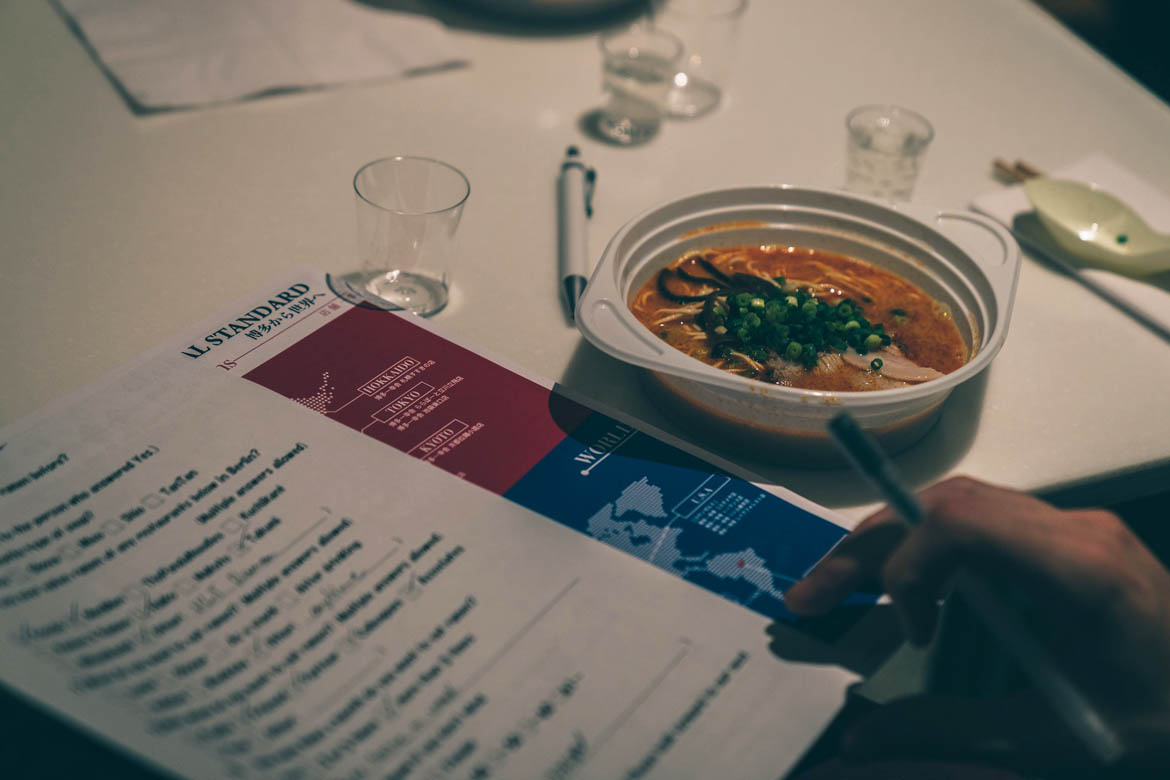 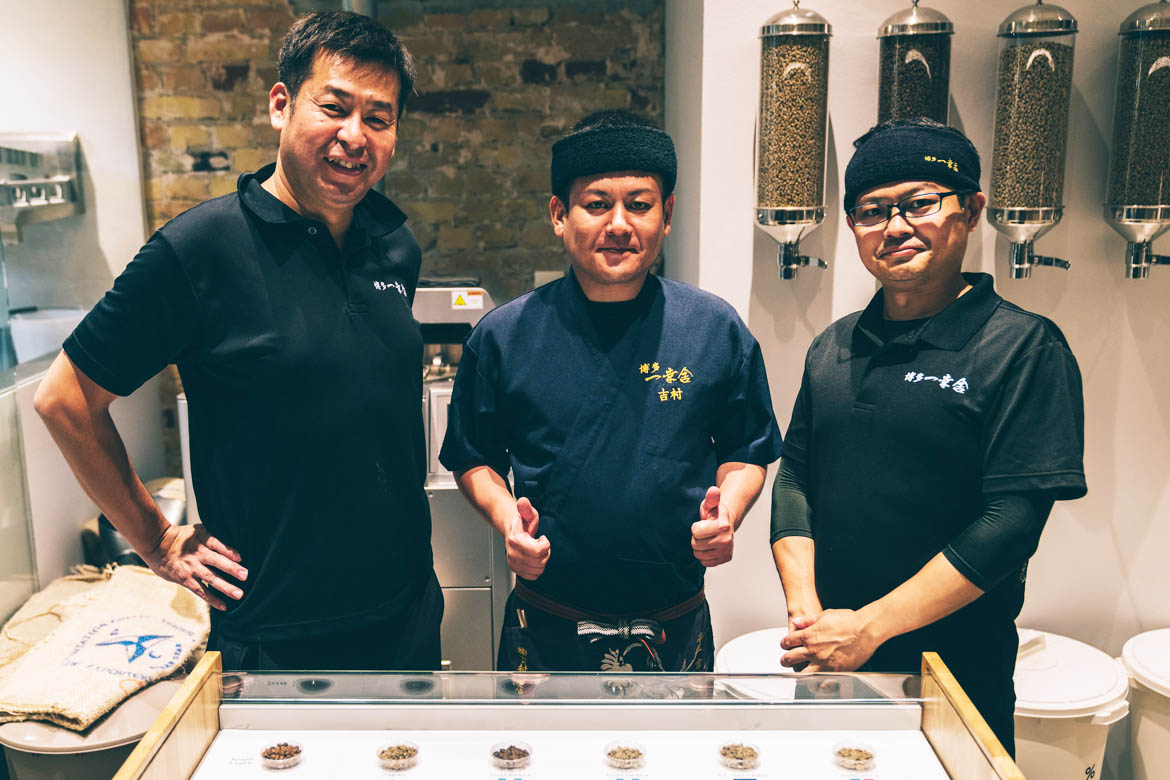 All pictures taken by Daniel Elias Remler. Thank you <3