Dancing everywhere: in factories, temples, on the street!

Recently, 生きる舞踊団 NEphRiTE Dance Company performed „Nature“ at Theaterhaus Berlin Mitte. The title is the connection, as all segments reflect on “birthing art” more than “creating” – based on the etymology of the Japanese word for nature, 自然 shizen.

The performance was made up of three pieces, each about 15 minutes long with short breaks in between. So the whole event lasted around an hour in total. The very defined and nuanced movements of the dancers were impressive and it was a pleasure to watch them in action. Theaterhaus Berlin Mitte kindly gave me opportunity to talk to the dancers afterwards.

The contemporary dance company NEphRiTE was founded in 2017 and is developing its own choreography alongside working with local communities and children. NEphRiTE is especially keen to create site specific dance pieces as well as performing in open streets in order to increase awareness. It is often difficult in Japan to find an audience interested in contemporary dance. Until now, they have been working in factories and even temples. Currently they are planning a performance in a church in Germany. The dancers told me that their cooperation is very strong, so the choreography develops and changes according to the time and place.

The title refers to an onomatopoeia for the sound of dripping water. The piece as a whole centers around a buddhistic phrase out of the Laozi Tao Te Ching: “jozen wa mizu no Gotoshi – If one could have and imagine a lithe mind like water, it can be that all ones relations go well”. It means that in order to lead a good life, one should behave like water, floating and adapting to the environment.

This piece was the one I could relate to least of all. Perhaps it wanted to tell too much since there were two dancers moving in the front and a third person in the back, providing the narrative part. As the dancers told me later, the person at the back was representing the main character and the dancers in the front his fantasies.

The music was impressive though, and sounded like a huge clockwork made up of a slow rhythm of ticks to which the dancers moved – being part of the clockwork themselves. 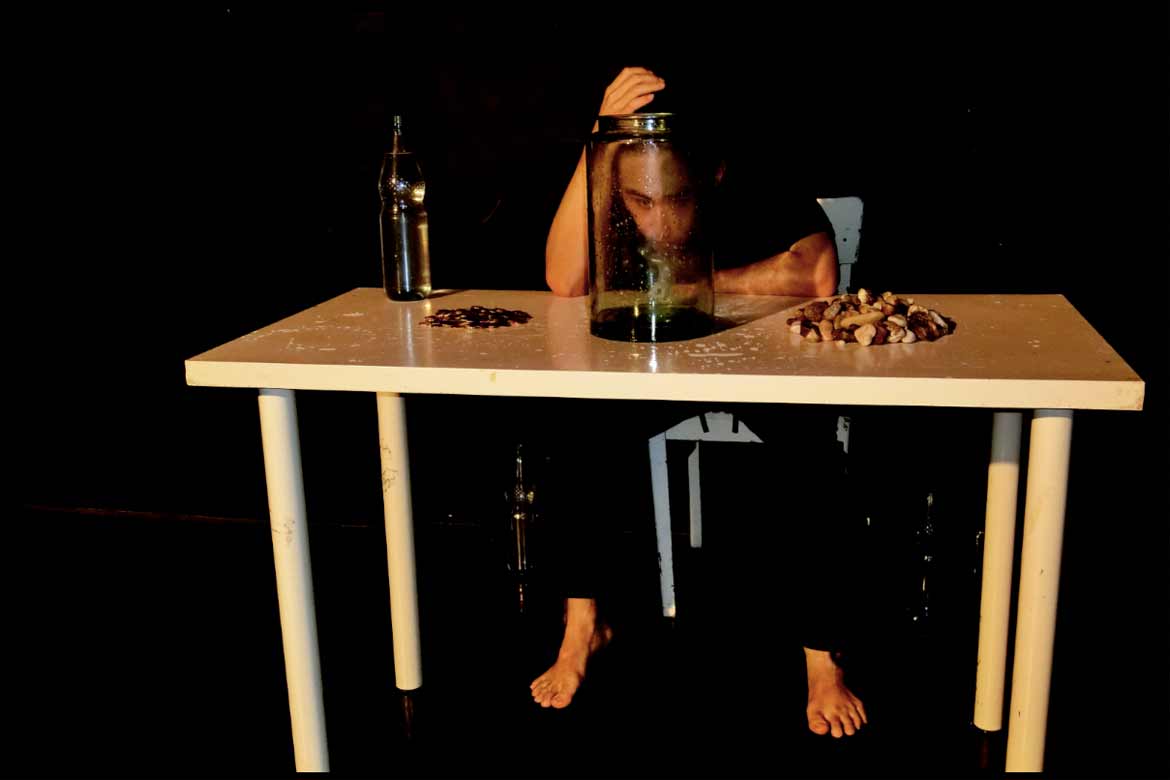 A dancer standing behind a table dropping stones and coins into a big bowl of water underlined the rhythm of the piece, but there was so much going on in the background that you couldn’t quite focus on the rest. The whole action was so forced, that it was no longer fascinating. Additionally, I am not that proficient in Buddhism, so it felt a bit like watching a movie without knowing the language. In my opinion, one of the basic fascinations of dance is that it works internationally. However, that didn’t apply for the first piece.

I warmed up much more to the second part which featured a giant blue cloth. The dancers were moving on it, played with it, and the whole energy was very joyful and almost childlike. At times, the action seemed a bit cheesy because of the sweetness of a couple seemingly playing in the waves of the sea, emphasized by “Air on the G String” from the second movement of Bach’s Orchestral Suite No.3 in D major.

Now and then, it reminded me vaguely of a 1996 reconstruction of Nijinsky’s “Jeux” of Millicent Hodson and Hodson Archer, in which dancers play a tennis match. “Jeux” is famous for its abstraction of movement and humour, though it is disputed what the original choreography was like. In addition, the piece might have done well with some of the irony of the reconstruction. The philosophic level wasn’t that apparent to me, but maybe I missed it. The shadow of one of the dancers at the side of the stage was particularly intriguing, because it seemed to develop its own dynamic and independent existence.

The last performance was the most impressive, as it took over the rhythm of the first piece, but varied the choreography only on one topic, not burdening the short performance with too much meaning. It centered around the Roman goddess Flora, the idea of the circle of life and how people deal with death, loss and finally letting go. Right from the start, there was a sound which reminded of electrical tension, similar to the buzz of a defibrillator. As later on the movements of a cardiac massage were incorporated into the dance, my initial reaction wasn’t quite off. On the stage a rectangle was drawn to distinguish reality from fantasy – or dream. The arc of suspense led from mourning a loss, falling into the fantasy of being able to revive the dead person to letting go and accepting.

Alongside the fluent, dynamic choreography the energy between the two dancers, Yu Yamamoto (the choreographer of the piece) and Kokoro Funaki stood out most. This embodied another reason for what is so fascinating about dance: the energy which radiates from the artists and seems to transform the space of the stage. The usage of everyday movements in contemporary dance connects the artwork to our daily life and to ourselves – there is no border in between. Dance visualizes what is in our minds and hearts and every movement in itself can be art.

Yu Yamamoto told me that the performance used the manga “Yū Yū Hakusho” as inspiration. The series written and illustrated by Yoshihiro Togashi is centered around a teenage boy who, after committing crimes, saves the life of a child in a car accident and instead dies himself. In the afterlife, he has to fulfil a series of quests, is revived and operates as an “underworld detective”, solving mysteries about demons in the human world. 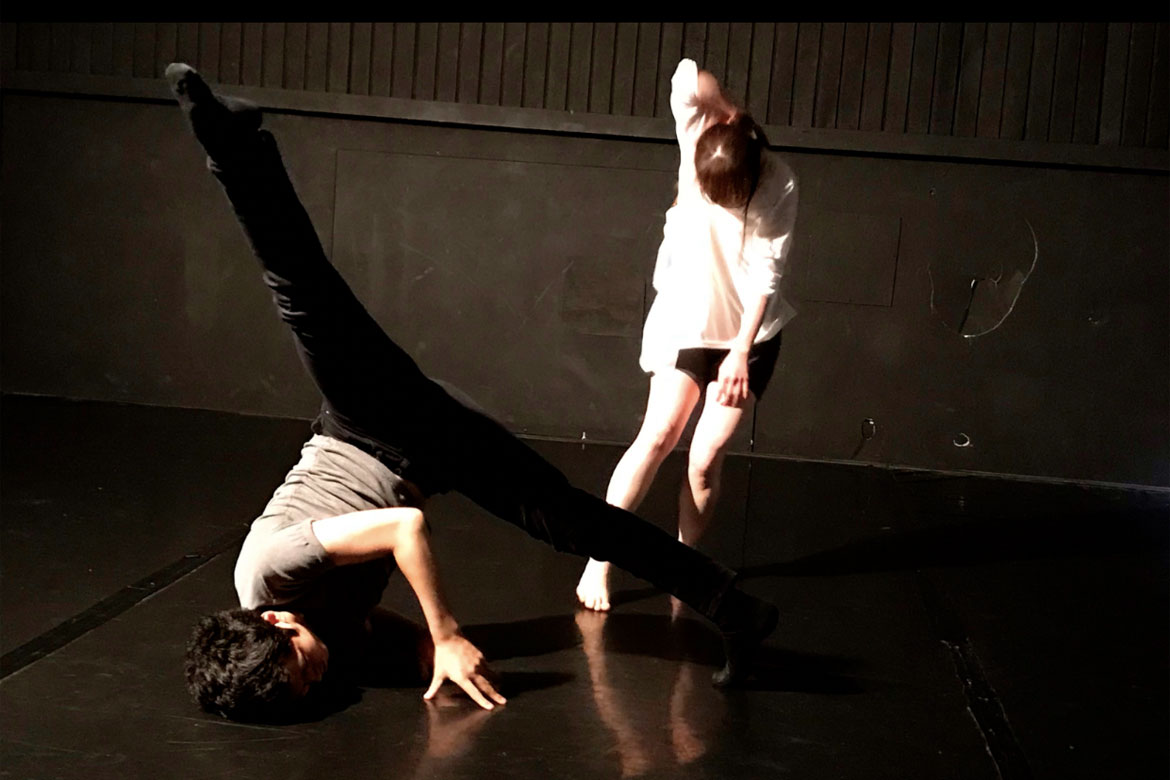 In conclusion, the dancer’s accomplishment and expression made a great visual impact, but at least for the first piece, the production tried to put too much into a short time span.

There are no additional performances of NATURE in Germany, but I would recommend watching other productions of NEphRiTE to follow their work. You can find announcements for next performances on Instagram.