Most companies rely on a model that allows owners, profit and shareholders to have a privileged seat at the table of benefits and accountability – whereas not much space is left to employees and society at large. Purpose companies have a totally different approach.

Recently, I went together with NION Chief Community Catalyst Naho to an event at Kino International (a very nice cinema located in former East Berlin) and I just thought of sharing a couple of words about it. Of course some concepts need introduction, especially if you’re not so familiar with them. But after reading this article I bet you will have that sparkle to dig more into the topic!

The event was called “Why self-owned companies are needed to unfuck our economy v.2” and was organized by the Berlin startup Einhorn and the Purpose Foundation. It was a follow-up of a previous event I was not aware of, that has taken place in January. The huge amount of people who took part and who were on the waiting list brought the organizers to schedule another one.

When purpose and shared accountability take over and overcome profit 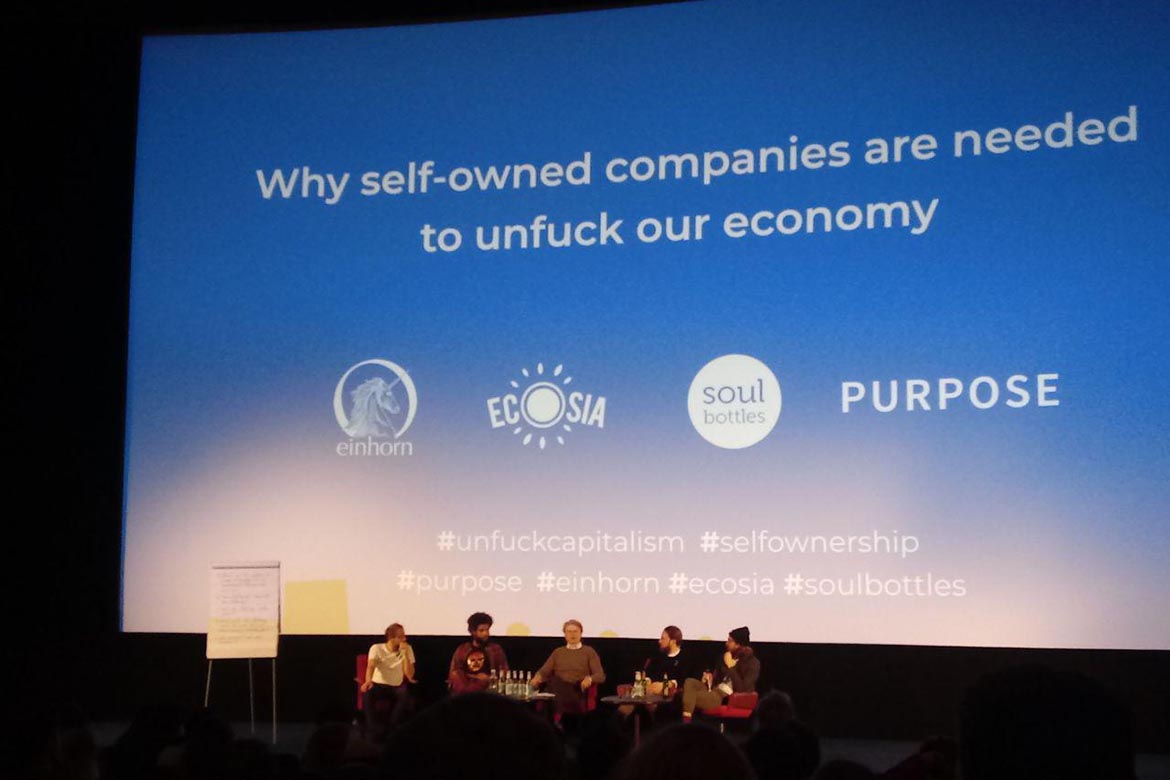 As the large cinema hall gradually filled up, faces and voices around began sharing a certain level of excitement. On stage, moderator and Einhorn co-founder Philip Siefer introduced the guests who would light up the scene: Waldemar Zeiler (Einhorn co-founder), Armin Steuernagel (one of Purpose Foundation’s founders), Christian Kroll (founder of Ecosia) and Patrick Boadu (Soulbottles).

The presence of Christian and Patrick was fundamental to understand the process that involved Einhorn in its transition towards a self-owned or purpose company, which was the main topic of the evening.

Christian and Patrick represent two purpose companies that have already undergone the process. They both explained the main features of the companies: if you are up to search anything on the web and at the same time feel like planting trees to make the planet a better place to live, you should definitely use Ecosia. While doing it at some point you will be thirsty perhaps, so why not drink some water from a 100% plastic-free produced bottle?

You may have noticed that the word profit didn’t cross your eyes yet. And that’s good. On the other hand, you encountered other terms. To essentially grasp the concepts of self-ownership or steward-ownership, and purpose company, a great help came from Armin.
What is actually all about?

Armin held a concise but quite clear presentation on what revolves around that. He referred back to the experience of one of the most important German companies, Zeiss, founded by Carl Zeiss in 1846. He passed away some decades later and fellow researcher Ernst Abbe took over. After bringing Zeiss to lead the optical market, Abbe realized that the success of his technological inventions would not have been possible without the efforts by academics and employees behind the curtains. As he could not stand to be the only one benefitting from all of that.

He established the Carl Zeiss Foundation that then became the owner of the company itself, in order to protect its independence from a few corporate members holding more power. In this way, Zeiss could have never been sold, as profits were meant to be reinvested or donated. Moreover, the material condition of the workers dramatically improved and their rights were recognised as basic ones. Nowadays, Zeiss is still at the top of its market and extremely successful.

Armin traveled back in time because this story was necessary to get what the event was about. He brought us back to the present by discussing the role of the modern approach to economy in general and corporate ownership in specific, and how this approach can be tackled.

An alternative, mission-driven and possibly better model to reshape financing has been in front of our eyes for decades. Now, Purpose, co-founded by Armin himself, has been trying to push this model and to involve as many entrepreneurs, investors and citizens possible.

Purpose is a network of organizations that has a sharp goal: make sure that companies would effectively transition to steward-ownership. In a nutshell, Purpose aims to support them legally and education-wise to become purpose companies, which means companies that own, finance and govern themselves, while being successful in their fields on a long-term basis, driven by missions that would benefit the whole society.

A purpose company will not be owned by a bunch of people who might sell it and speculate over it. Profit will not be the objective, but the means to make the corporate mission tangible and long-lasting, and to do so it will be mainly reinvested. Accountability is shared among the people working in the company. Eventually, the goal, the purpose of a company becomes the reason behind its own existence.

Why Einhorn wants to transition as Ecosia and Soulbottles did

There is plenty of room in the field of purpose economy, and Einhorn decided to join and embark on this new adventure. Einhorn is a company that has fairstainability at its core. They produce vegan design condoms while being attentive to the sustainability aspect of their production as well as to the transparency of the whole value chain; everyone working for the company is treated equally.

After Armin’s presentation, the Einhorn co-founders Philip and Waldemar performed a role-play where a mother and her entrepreneur son talk about the condition of the global economy, how bad it is going and what prospective steps might be taken.

The hilarious interaction evolved and then took a new shape, becoming a more serious conversation with the other guys on stage. The two co-founders shared their thoughts and the reasons that led them to basically hand over their ownership to Einhorn itself. They still had some questions that needed to be clarified, and in this regard Christian and Patrick helped them to understand how the transition worked and affected over time Ecosia and Soulbottles respectively.

Armin’s constant support and supervision enriched the exchange as well, that later included many people from the audience too, making the session more interactive and full of interesting inquiries, feedback and inputs.

Events like this are remarkable as they help raise awareness: a way to promote against the current status quo is already here. Let’s spread a purposeful word around!

Header picture by Daniel Lehrmann on unsplash. Thank you <3