At CLB Berlin, multi talented Stefanie Kloss – photographer, architect and media artist – shows photographs of the demolition of architect O M Ungers’ building complex for social housing at Lützowplatz and juxtaposes them with other buildings that, just like Ungers’ have been set up for the Internationale Bauaustellung IBA 1987.

According to her description, Kloss was not interested in documenting the destruction procedure, but in an abstraction that seeks to elaborate on the IBA’s theoretical ideas and approach while at the same time taking a critical look at the current urban policy. She didn’t speak much about the exhibition or O M Ungers’ building, though, so I was curious to learn more about it when visiting the exhibition.

I took my time to look at the matte photographs, which sometimes seemed almost like paintings – or stills from a melancholic movie where all the beloved heroes suffer because of the metropolis. The prints were not hung on the wall, but stood close to each other on ledges, which meant that they were slightly inclined backwards. The intention behind this was probably to reinforce the perspective impression: all pictures were taken diagonally from below, which automatically makes the viewer small and therefore inferior to the building. Although I don’t like that feeling, I enjoyed the subtle colors of most of the photographs, the lines, the structures, the patterns. The more abstract the picture was, the less the building was recognized as a building, the more I could lose myself in it. 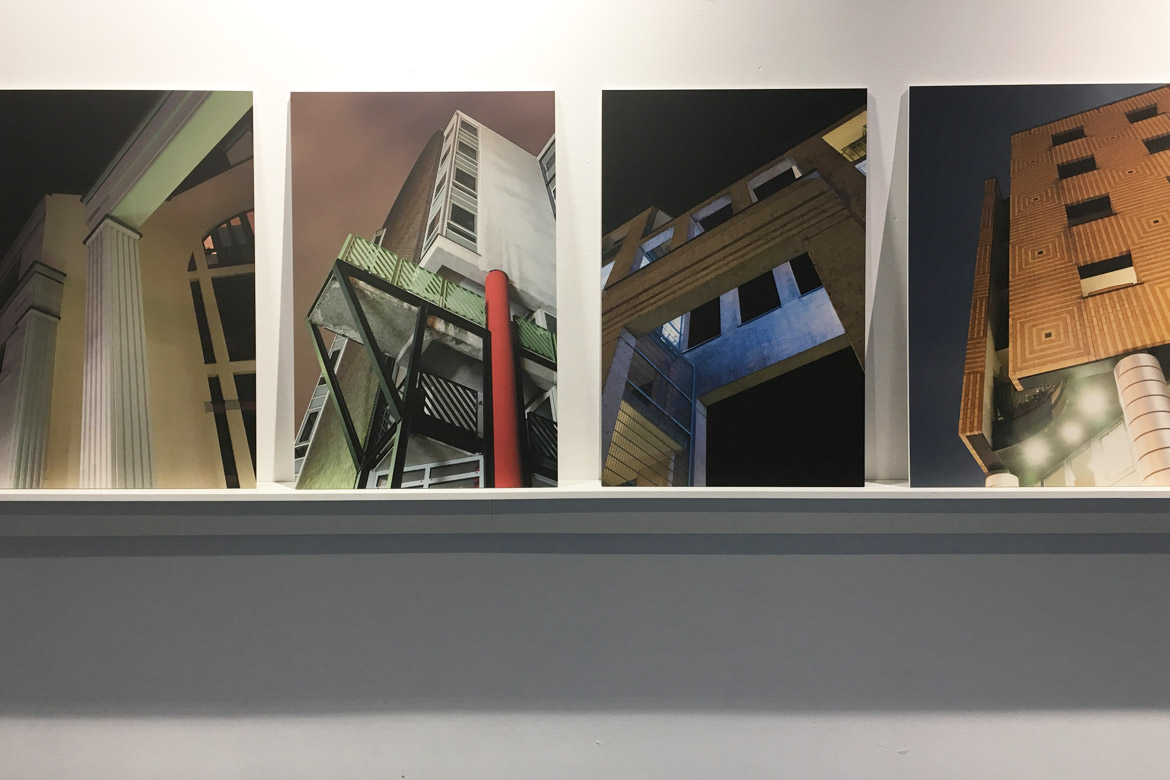 However, I wasn’t satisfied. I had come not only because of the art, but also because of the political approach. I wanted to learn something about the aforementioned social building policy. Nevertheless, I could not even recognize which pictures were of Ungers’ buildings. There were no signs, no explanations at all, and I did not find more than the information I already had.

A strange approach when one criticizes the exclusion of people from the city, but at the same time excludes all those who have not already dealt with the IBA buildings and, above all Ungers’. So I had to do my own research afterwards.

Ungers built the residential complex between 1979 and 1983 as part of the IBA. Some years ago, it was sacrificed in place of a more densely populated hotel, office and residential building, instead of maintaining it. Unfortunately, protests by tenants and architects were not successful.

Ungers building combined the contrasts of city and nature in a small and simple way and summed up in the formula “The garden as city, city as garden” – which reminds me a lot of NION, where the community garden is an essential part, stretching over the roofs of the whole of NION, becoming the connecting entity of all its clusters. At Lützowplatz, such an urban utopia had already taken shape decades ago! A concrete and exemplary implementation of the concept of the “city within the city”, an inner-city social housing construction. As NION is an approach to create a living environment for everybody, its social housing rate will be 35 percent.

If you want to learn more about Ungers’ building complex at Lützowplatz – the approach, the building process, politics, its structure and the demolition, there is a comprehensive article on the website of the Forschungsinitiative IBA 78 (in German).